I Wanna Be Like Meb: Meb For Mortals Book Review

The 2014 Boston Marathon was an emotional race for many; particularly those that raced the year before in the Boston Marathon Bombing year. Two days before the 2014 race, I had a decision to make. A blogger meet-up, or meet Meb Keflezighi at a Generation UCAN sponsored speaking engagement at a downtown Boston hotel. I chose the Meb event and considering he won the race two days later, I had made the right decision.

There were two things I noticed about Meb (and his wife;) one was what a genuine person the guy was (#mancrush) and secondly was the confidence he carried (along with his water bottle.) Hollywood could not have scripted the race and ending any better to have the first American since 1983 win the greatest race in the land on such an emotional day. The previous American winner was not Bill Rodgers, but Greg Meyer...think big 80's hair and beard and short shorts. 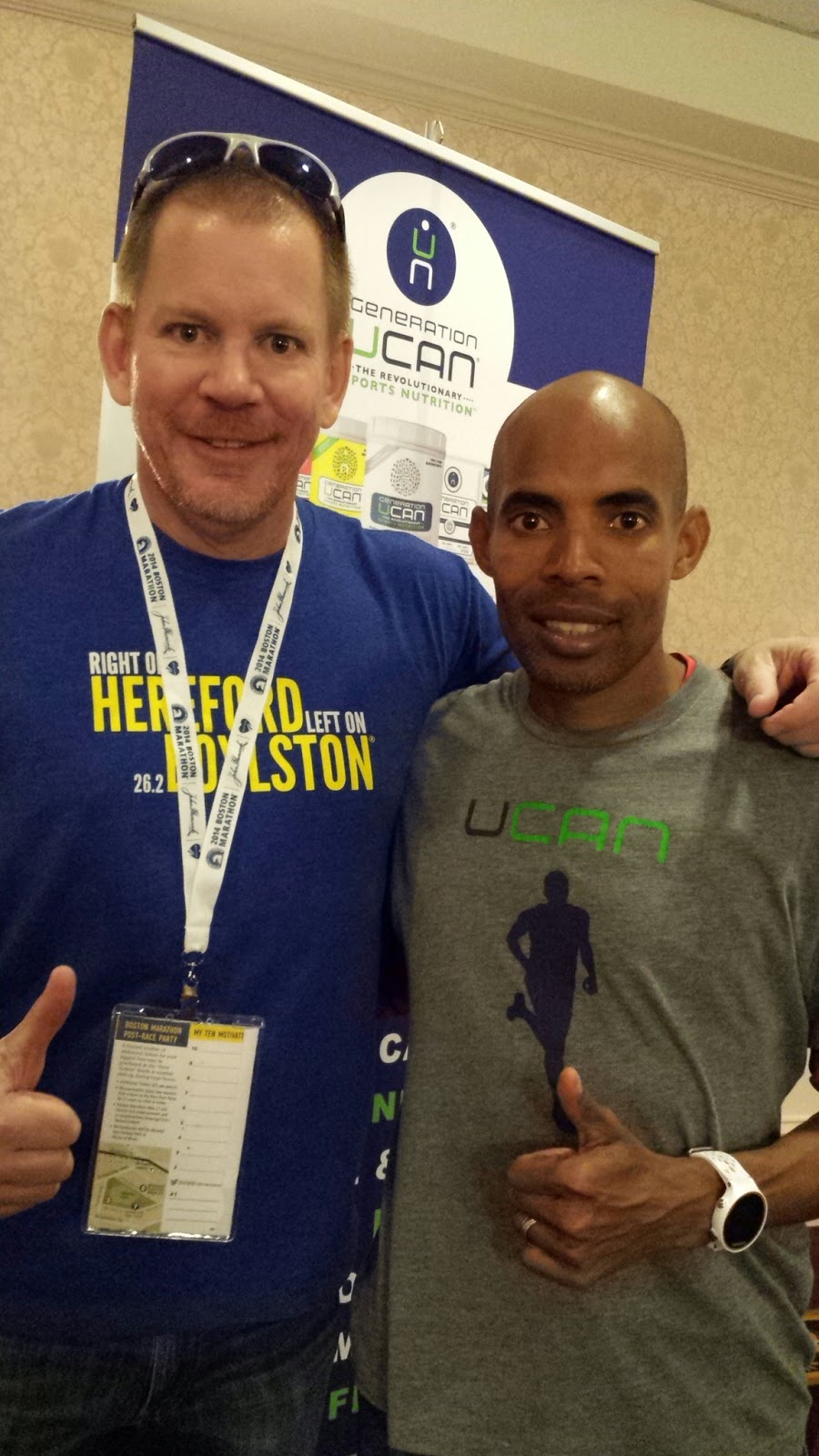 When Runner's World asked me if I was interested in an advance copy of his book, Meb For Mortals, I trying to remain composed and professional with my response. Heck yeah!

With the 2015 Boston Marathon, less than two weeks away, as I was reading the book, I must admit, I had two conflicting feelings; 1) What an inspiration, I'm getting totally amped for this race, and 2) Oh crap, "I didn't do that," or "I didn't do this" as I read his cookbook for run success. As Meb would likely say, at this stage of training, your training is essentially done, and it's not time for the mental preparation for the race. There were quite a few sections that helped from this regard; including routine leading up to race day. There are quite a few things that he talked consistently about through the book that were also confidence builders as my coach implements many of the same aspects (such as strength training.)

The book was a fast and easy read logically broken down into all aspects of success; think, run, train, race, eat, strengthen stretch, and cross-train like Meb.

Meb brings credibility not only with the Boston win, but a win in the New York City Marathon and Olympic medalist in the marathon event...his Boston win came at the ripe age of 39! As mentioned above, much of what Meb wrote about I could relate to starting with the first chapter on "Think Like Meb." I have always been very goal-oriented so I set both long-term and short-term goals for myself. Qualify for Boston, Qualify for New York, sub-twenty minute 5k and sub 1:30 half are all goals I've set and accomplished myself. The other uncanny resemblance is the goals for a given race itself. He likes sharing with a small group of close friends to hold himself accountable not only to himself but others. He also likes to set multiple goals as I do within a race starting with a "stretch goal" and a handful of others that are still not easily attained, but if you happen to struggle within a race, you still have something to shoot for that's attainable. 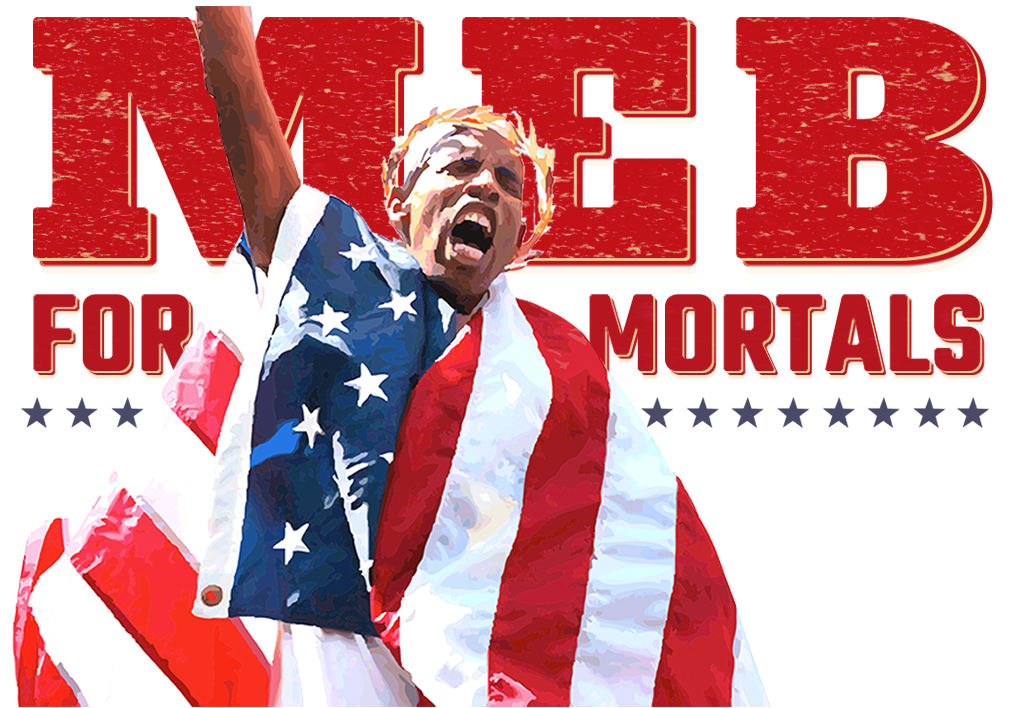 yet it pointed out areas I could improve upon; particularly around diet. Meb will reach for a banana or fruit when the recreational athlete will grab something less healthy when a "sweet tooth" craving happens. Meb breaks down his diet week-to-week, pre-race, and recovery.


There were a couple other areas that reinforced my thinking, training and confidence going into this year's Boston Marathon. For me personally, coming off major injuries sustained in a triathlon crash this last July ('14,) I knew that Boston would be tough if I didn't work hard on my strength. Meb talks about how he's had to overcome similar adversity including a pelvic stress fracture in 2007, 2008. Meb For Mortals provides a wide range of strength exercises (with straightforward explanations and photos) for runners of any distance.

The second area of his book that seemed to resonate with me was the pace you should run your various type workouts; with particular emphasis on recovery days. Meb does not provide a full sixteen week plan for a marathon, but a representative four week schedule for 5K, half marathon, and marathon distances. He also incorporates a nine day training week--NOT something I've ever done.

I clearly need to improve on a few areas in my next race; more stretching (he spends a ton of time on this in the book and in his training routine,) more hills (I'm perhaps critical of myself too much here,) and how to modify a training run when you're feeling run down, injured, or short on time. He's a big believer in cross-training which suits me well as I typically rotate in 1-2 days a week of cross-training which helps me as I transition in triathlon season after Boston. Aside from the major topics in the book, there are several Mebism's throughout; like how to handle the sleepless night before the race; he actually starts fueling when he wakes early to get a head start on digestion.

Great things tend to happen to great people and Meb is a breathing example of this. His book gives you inspiration and a recipe to hit your goals regardless of your level. I wanna be like Meb.