Okay, so I'm exaggerating a bit, but other titles that were considered were rejected by the editors of SeekingBostonMarathon.com;

"A pretty good day"
"A good run on a cold day"
and
"Thank you Sir, May I Have Another" (would have been confused with my Fifty Shades of Marathon Grey post.)

While I provide write-ups of nearly all races, I never recap training runs as they're typically quite run of the mill (no pun intended,) uneventful, and quite frankly boring. While I've been spoiled with some absolutely fantastic running venues on the road, I have also been quite run down (another run pun) as of late with a heinous travel and work schedule. Get out your "cry me a river" mini-violins, but the last two weeks have been on the road to Seattle and San Francisco with work. One of those days looked like this;

5:30 AM Conference Call with Boston from Seattle
6:00-7:20 Squeeze in a seven mile recovery run before the regular workday started
8:00 AM Breakfast and strategy meeting for the day ahead.
8-5PM Three customer meetings.
5:00 PM Customer demo after hours
7:00 PM De-brief with management over dinner in a strip mall
8:30 PM Conference call on escalation issue
9:30 PM Eyes collapse halfway to hitting my hotel room pillow and thinking about 6:30 AM conference call. 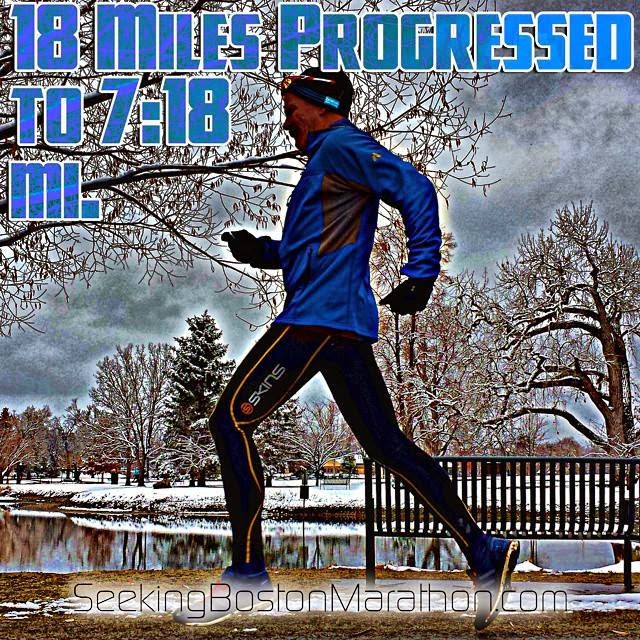 The one misnomer about distance runners is that with all that training you must be in incredible shape and have all sorts of energy. Half of that may be true, but you're downright exhausted. For those that travel, you know that airplanes, hotels, differences in time zones create additional strain on the body and takes extra planning to fit in training every day. Worst example of that was two years ago in Barcelona (no I'm not complaining) having to squeeze in an 80 minute run before the breakfast, tradeshow full day, and into the evening with client dinners. A six AM run was essentially 10PM according to my body clock...then my day started. Anyway, you get the point.

All this leads up to my first Boston Marathon simulated training run last Saturday preceded by 48 hours similar to the timetable outlined above on Wednesday and Thursday and traveling home to Denver on Friday. I had the option of taking a "rest day" on Friday, but my "alpha male" decided on a 13 mile indoor spin followed by weights on Friday afternoon. The weather forecast called for Denver's version of "Snowmageddon" throughout the weekend. I was "flat out" tired and considered emailing my run coach begging for sympathy and "could I move this to Monday," or "the following weekend?" Pure testosterone kicked in, and I set the alarm to knock out the eighteen mile run on Saturday.

Friday night, my wife prepared a fantastic chicken and dumpling dinner, I loaded up on some iron and B vitamins and "crashed hard" before 10 PM. Many of Runner's Roost Race teammates were racing on Saturday morning at my favorite run series at nearby Hudson Gardens, but I notched my first race the weekend before at the Love 'Em or Leave 'Em 5k knowing I wanted to get the simulated run in on this Saturday. I had horrible energy for that 5K but managed a podium running on a bad back and pure guts in that race. I had a lethargic twelve mile recovery run the following Sunday. All this played "mind games" with my confidence going into the simulated Boston run.

The last three mile set was 10-15 seconds faster than marathon goal pace. I would finish with 2-3 recovery miles. This is consistent with many of my training runs which either alternate fast and faster or as I did on this day, progressively run faster. This makes sense if you want negative splits or simply want to have energy in the second half of a marathon. I ran this one at Denver's Washington Park which has a roughly 2.5 mile loop around the park. The deep snow didn't materialize until later in the weekend, but the outer gravel path was quite sloppy with a mix of snow, mud, and ice. I stuck to the inner asphalt roads and started out way too fast.

Given my current state of conditioning and what I felt like, it was hard for me to put a target on what my marathon pace should be. An eight minute per mile pace would be a 3:30 marathon and five minutes below my BQ target. While I'm not sure yet if I have it in me, I still want to break 3:20 which means a 7:40 or better pace. My 5k and half marathon times indicate this is quite doable, but I've yet to break 3:20. Anyhow, I set 7:40-7:50 as the rough marathon goal pace targets for this day.

As I mentioned, I went out a bit too fast hovering an eight minute per mile pace during the six mile warm-up. I don't want to taunt the "run gods," but it seemed quite comfortable.  I consciously continued to try and slow it down, but running slow still hung around 8:05 pace. My confidence was building. The one thing I like about runs like this is you compartmentalize each segment vs. thinking, "I have to run 18 goal-paced miles!" No, this was a six mile jog, three three mile runs with two minute recoveries, and the cooldown would be the easiest part. Sometimes simpler said than done.

The first three mile set was easy considering I basically ran that pace during warm-up. The crowds were thin in the park, but had a good number of hearty runners out there along with the Chinese yoga group squatting in the Northwest corner of the park. There was what felt like a five mile an hour breeze, but it didn't seem to impact me much considering it would only be a headwind half the time on a looped course. I seemed to have worn the right level of clothing with a light skull cap, long-sleeve Eddie Bauer run shirt, gloves (of course,) and my Nike run vest. I wore my favorite Skins compression tights which ironically I wore in my marathon PR race in Sacramento.

The second set mentally seemed quite doable again thinking, I just need to knock out three miles hovering a 7:40 pace. Lethargy hadn't set in yet, and I dosed with Hammer Gels and my new-found love, SOS Hydration. Having a loop course, I used my larger water bottle at my car, and carried it for the first six miles. I then switched to my Simple Hydration bottle that slips nicely inside your run belt and pants basically nestled in your butt crack. The beauty of this you really don't notice the weight yet can carry your favorite liquids.

After the second set, I again had the two minute recovery then mentally said, just three miles left. My energy was still there and decided to push it a bit. In the third mile (actually mile 15 at this point) I ran a 7:18 mile. Infrickinsane! I had no idea where this energy had been or where it came from. Yes, I was a bit tired after that last set, but mentally it was now cooldown time and I ran roughly 2.5 miles to make it an even eighteen miles for the day.

I tweeted, Instagram'ed, and posted on DailyMile and Facebook. I have an amazing support group online and got comment such as;

From SugarMagnolia; "how you've gone from a collapsed lung to 18 miles at an incredible pace is a testament to your strength and dedication. Wow!"
From Barb on DailyMile;  "dang! look at you go!! effing fantastic!"

And the best part was from my coach, "Glad to be in charge of your program and help all I can but at the end of the day, your improvement and this fantastic comeback, is vastly due to your hard work physically and mentally, coming back form disappointment."

No miracle, but a good day at the office.