Where in the World is Seeking Boston Marathon? Amsterdam!

I have notched another country in my travel belt.  Work took me "over the pond" last week to Amsterdam.  As I always do, I packed my run gear in my suitcase to take in a run on foreign soil.  I've been a bit spoiled over the last year with two trips to Barcelona, halfway around the world to India, and now to the Nederlands.

Flying as much as I do does have its privileges as I have achieved 1K status on United Airlines.  That normally means a good seat on a plane with the occasional upgrade.  I didn't get the upgrade, but I was up in economy plus on the way out with the prospects of an open middle seat on the long flight over.  The middle seat was occupied--by a two year old.  I rarely am able to sleep on an outbound international flight, and "Timmy the Terrible Toddler" guaranteed that.  You can't do much about weather, taxes, and who randomly occupies the seat next to you on a plane. 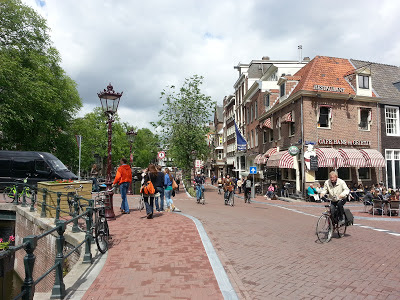 I arrived at Schiphol International airport just after 7 AM and went through the routine of customs, grabbing some Euros, getting a jolt of coffee, and heading out in my taxi for the short drive to my hotel.  Surprisingly, after running a PR in my half marathon on Saturday, and traveling overseas, I had a fair amount of energy as I tried to convince my mind and body that it was seven in the morning, and not midnight with no sleep in the last 24 hours.  The good news was the business work didn't start until Tuesday so I had a day to acclimate my body to the new time zone.

This was a new part of the world for me which I knew very little about.  I knew more than my daughter who thought Amsterdam was in Germany.  Note to self...get daughter some geography lessons.

I ran into one of my co-workers in the lobby checking in who informed me a small group was headed off to some museums after setting up the trade show.  After a "power nap" of a couple hours, I was re-charged and ready to explore.  A little known fact about "Seeking Boston Marathon" is Ty the artist.  I was a bit of an eccentric nerd as a kid as I loved to draw and still tap into my creative side (writing, drawing, painting, and graphics on the computer.)  One of my favorite Christmas gifts I received as a kid was the board game "Masterpiece" from Hasbro.  I know...nerd city, USA, but it was my first exposure to the Dutch Renaissance master painters.  I was one of the few kids on the block who knew who Rembrandt or Van Gogh was.  Glasses, braces, zits, and art lover.  Good God...it's amazing I didn't get beat up. 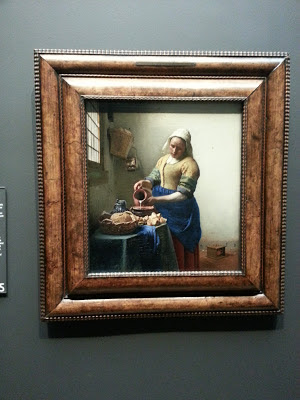 The museum on our schedule was Rijks Museum which had been closed for ten years and had only recently re-opened in April.  I asked one of the museum employees why it took so long to remodel and a bulk of the delays were related to structural issues.  Much of Amsterdam is built on water and many of the original buildings were built up on wood.  I'm not a structural engineer, but imagine that wood doesn't do well over several hundred years under water.  Rijks is easily a museum you could spend an entire day in, but my energy and attention span had a couple hours in me.  I was on a mission to find Rembrandt and Van Gogh.  One thing I noticed was how close you could get to the artwork.  Most paintings merely had a short glass wall around 18" high 18" away from the wall.  I rarely "flip out" over a museum, but I felt in awe of some of the works I was able to get up close and personal with.


The city of Amsterdam is laid out in a cobweb labyrinth of city streets and canals.  Color me stupid, but the canals was one part I didn't realize was so prevalent in the city.  It certainly added to the glamour of the city.  Some city blocks were under construction as buildings were awkwardly leaning over due to the aforementioned wooden underground.  As far as getting around the city, the most apparent thing is that everyone owns a bike and it seemed to be the most common form of transportation.  Young and old get around the city on typically a basic one-speed newspaper style bike.  Far more bikers than runners as near as I could tell.  From our Novatel hotel near the convention center, it was a convenient rail trip to the center of town to take in all that Amsterdam has to offer. 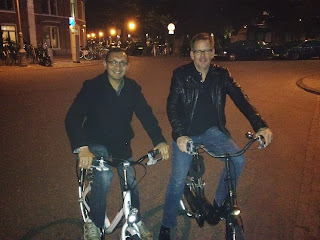 Offer is the right word for it as the city is known for its excesses in "coffee shops" where they don't sell coffee and the infamous "red light district."  I did not "partake" but in the interest of journalism, I did a lot of observing of this part of town.  Crazy...only place in the world where you will see a hash bar attached to a church.  As far as food, I'd have to put it right up there with Barcelona as the dining was phenomenal the few nights we were there.

As far as running, as I mentioned above, I had just come off a half marathon the weekend before on an all downhill course, so my legs were a bit trashed, so I took a few days off, but certainly logged a fair amount of kilometers walking the city.  I was NOT going to get out of this city without a run so I plotted a short run through Amstel Park on my last day there.  I ran past the park along a river (Amsterdam is known as the city of rivers,) and even spotted some windmills and cows.  Just as I marveled at the museum, I realized how fortunate I was to be running in this great city.  One of the few comedic highlights of the trip and the run was getting a bit off course and wandering into the petting zoo and train area which was closed off for a private party.  I was trying to casually open a gate and escape when an older gentleman started cursing at me in Dutch.  Most people in the city speak English which makes it easy to get around.  He finally yelled, "English?" and realized I was just a slightly lost tourist.

A great city to get lost in.
Email Post