Mirror, mirror on the wall, who's the fairest of them all?

Or...hello, my name is Ty and I'm not only a marathon addict, but I'm a marathon race pic glutton (aka race pic whore.)  I'm convinced the former is an addiction of the healthy variety, but I'm beginning to question the value of the later. 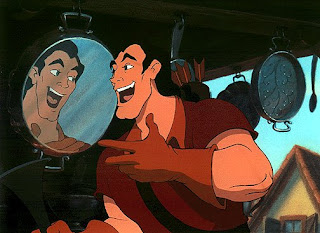 I was out last week celebrating the holidays when my wife's girlfriend noticed my screen saver which shows me passing the Boylston flags along the Boston Marathon finish line in April.  That race held special meaning for me in multiple ways so I didn't hesitate to open up my wallet and spring for the digital images, yet it made me wonder, what kind of narcissist asshole carries around a picture of himself?  Umm...Gaston would have.

Gaston was the jerk from Beauty and the Beast that Belle rebuffed to hang out with the Beast.  (Proof that women dig #beastmode.)  Gaston was such a self-absorbed jerk that he loved looking at his own image.  No doubt if he'd run marathons, he'd have a picture of himself on his phone, in his office, and on his favorite photo coffee mug.

There's no question that you buy the photo for your first marathon, or your first BQ, or your first Boston, or your first run in a new city, or your first run in the rain, or...you get my point.  At what point, do you say, I'll skip the $49.95 for the images and hold the memory in the photo album section of my brain.  At what point do you draw the line on pictures you order; 5K race, trail race, first triathlon, first Ironman (absolutely...that one goes in the Boston Marathon automatic category.)  What about a muddy buddy, color run, or nude 5K?  Ahem...haven't run any of the later, but they're all on my bucket list.  Blog readership could certainly shoot up or spiral with some of those pictures.

On the positive side, the photos I do purchase are usually symbolic of a lot of hard work that went into that particular race or held special memories.  I crack up at the pictures of my first marathon in San Diego which I've posted here before.  I look like I'm giving birth near mile 18-20 while some dude 20 years older than me is about ready to pass me.  I do tend to buy more pictures than the average runner because of this blog and all the usual race reports that would be more boring without the accompanying photos.  I tend to buy pictures if I podium which isn't often when I run and more often when I compete in triathlons.  With my new run coach, I have been buying a lot more run photos than I have in the past.

Because of this weird set of rules, I admit that I've even bought a couple 5K race pictures including my ninja race pic.  One of my all-time favorite race pics became part of my first blog logo.

This all brings me to my most recent race; the Slacker Half Marathon (from Loveland to Georgetown, Colorado.)  Another race that held special meaning for me.  I ran a new half mary PR by three minutes, cracked 1:30 for the first time, hit the podium in a tough field, and came within 18 seconds of accomplishing my "secret goal" of qualifying for New York.  Once again, Gaston opened up his wallet and sprang for the full digital set.
Email Post