Old Guys Rule: Runner's Guide to Podium in Your Forties and Fifties

UPDATED: Since this original post, I've continued my unorthodox podium run in 2017 after starting the year thinking my running days might be behind me. I pushed my run buddy Liam in the Denver Rock n' Roll Half Marathon where he came in first in the wheelchair division, and more recently, I took first in my age group in New York City at their Turkey Day 5k (I would have actually come in first in the next younger age group so I must be doing something right!

My mind is still sharp (debatable) and my competitive drive has not waned. The slight problem is that age and miles have "piled up" a bit since I started running. Runner's World Magazine had an article (Five Things No One Tells You About Running as You Get Older) where Deena Kastor talked about the same thing where she offered her perspective and some guidelines around running (competitive or recreational) as you age.

I won't lament my litany of injuries. I will however talk about some positive trends and encouraging results including my second podium of this year this last weekend. After the New York City Marathon, I visited my ortho with a right knee that had "ballooned up" and his diagnosis did not change; I have some cartilage deterioration and arthritis in my right knee (after more x-rays, the issue is in both knees.) The young doctor (who's also a runner) asked if I'd consider biking instead of running. I asked him if he considered being a dentist (I know...I know, an old joke, but a good one.)

After feeling sorry for myself, and even going so far as to attend a stem cell (regeneration) seminar, I do what I always do and focused on what "can I do?" Fundamentally, I scaled back significantly on miles and number of days in the week that I ran and focused on some treatment (more on that later.) My "positive spin" was that I implemented a blend of swimming and cycling on the other days of the week which would put me in a good place for my summer triathlon season.

More recently, I'd come across an article from Sports Fitness Advisor that talked about the benefits of running. There is much debate on whether the rigors of marathon training makes you healthier or wears down the body sooner (especially as you age.) Their article talks about the many benefits of running including cardiovascular (more obvious,) mental health (I can attest to that,) and actually benefiting joints, bones, and muscles.

I put that to the test last month at the Regional USAT Triathlon Championships in Colorado. Prior to that triathlon, I'd only raced three times this year (10k in January, an Irish Marathon (7k) in March which was more of a "fun race" and the Cherry Creek Sneak in May. Ironically, at the sneak, I was within three seconds of an age group podium which is saying something in that that race attracts a lot of fast Denver-area runners.

Back to the triathlon. I did "okay", but merely managed eighth in my age group. Considering I hadn't been in my wetsuit for eight months and had ZERO open water swim practice, I couldn't complain too much. Translation? #stupid 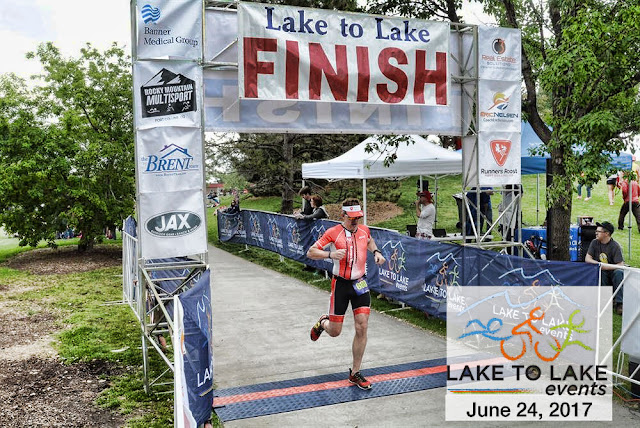 My open water swim was so bad, that at one point, one of the kayakers asked if I was okay. I've developed into a decent swimmer, but I have directional and mild (I'd call it) panic or hyperventilation issues in competition in the water. Practice would have helped. The bike was slightly below the 20 mph goal I usually strive for, and my run was "average." Having said that, the field was "loaded" as it was the championships.

I do plan to get in more tri's in the time remaining this summer, but wanted to step up the number of races to at least one per month this year...if this was my farewell tour, or last competitive year of racing (I've contemplated that) I wanted to get in as many as my body could handle.

Looking at my travel calendar for the balance of July, I "had" to get in a race this last weekend. There was another triathlon in Boulder, but it was an Olympic distance, and my open water swim was still not ready (I "kill it" in the pool, but need more open water work.) The alternative (and my choice) was the Sand Creek Half Marathon and 5k/10k that was less than six miles away from my house. Once I showed up, I was happy to meet a fellow Runner's Roost race team member working the volunteer tent, and a good friend of mine (Vince) who is a regular with their race series. Confidence grew slightly as I realized I didn't recognize some of the fast guys in my age group.

The short version of the race was I slept well the night before, and pre-race rituals went fine including warm-up strides and (too fast) jog. Bear in mind that up until the week (literally) before, I was still only running two days a week. To "cut to the chase," I ran a respectable 45:55 (7:24 pace) on a hot and not exactly flat (nor hilly) course. Literally, only my second 10K of my life (the other also this year) and second 1st place in my age group this year in a 10k (note to self...perhaps you should have been doing 10k's more often the last ten years?)

So, since I didn't pull a "Rossi" and cut the course short, or ride a bike (or Ruiz subway,) how's this possible? I'd break it down into a few answers;

1) My training plan is a hybrid of what I learned from my running coach, Benita Willis, and a Furman FIRST Marathon training plan. The later mirrors my training routine in that I'm only running two days a week, but my run coach only "pushed me" two days a week. The primary difference is I only "push myself" one of those two run days. My "push day" typically involved a two mile warm-up (around nine minute mile comfortable pace) followed either by Yasso's (half mile repeats) or progressive runs. I'm a "fan" of both and in the case of Yasso's, I'm not quite at my PR pace of two years ago, but still dip below a six minute per mile pace in my half mile repeats. Surprisingly, my knee(s) seem to be able to manage this level of mileage and intervals.

2) Lot's of treatment. My non-professional (which applies to this entire post) opinion was that I had a lot of swelling at the outside of my right knee. There was also a fair amount of muscle and tendon (I'll call it) "strain." I've used a combination of strength, stretching, chiropractic care, and massage therapy. A bit more out of the norm was also laser and sonogram treatment.

3) A flexible plan. Since this has been "fluid" (not to be confused with the fluid in my knee,) I don't have a written plan (unlike the last ten years of my run routine,) but I have the same goal every week. Run two days (perhaps going up to three.) One of the two run days, I focus on speed work (explained above,) and the other is a short long run. I've limited that to eight miles. I ran nine two weeks ago for the first time since November 2016. On average, I work out 5-6 days a week--rarely seven as my body needs rest and that seems to work for me. Travel (work and family trip to Italy) and family have also limited my ability to do much more.

4) The shoes. I've "tinkered" with a variety of shoes. I used to be an extreme ASICS loyalist. I've run in Brooks and had recent good experiences with Altra Running shoes. My current "love" is the Hoka One One brand. Makes sense that if my knees are tired of pounding, a smoother ride has treated me well. They're "light" and provide a "cushier (is that a word?) ride. #bigfan

The "bonus" advise is pick races with slower runners (insert sarcasm with a tinge of truth.) I clearly benefited from a slightly less competitive field last Saturday, but first place is still first place and a 45 minute 10K is certainly respectable for a guy my age with 1/2 of a good knee to run on only running two days a week.

I will conclude with one of Deena's "Five Things" which was #4; "Food Isn't the Only Source of Fuel." I'm not sure if marathons are in my plan, but I'm definitely in my "giving back" mode in my run life. I raced with my run buddy Liam at the Carlsbad 5000 in April pushing him in a "Team Hoyt" race blade. I'm off to San Diego next week (details HERE) to help present him with his own race blade (Fund raise complete!) Liam definitely provides me ample motivation to keep running.

Are you in your forties or fifties and have similar experiences; good or bad? Would love to hear from you in comments on on my twitter feed.

Footnote: If you read the photo captions, you'll find a couple "Where's Waldo" challenges. Find both and the first five get a SBM sticker for your laptop, cat, or school locker.