Three Blizzards and Deja Snow All Over Again

I can blame the blizzard in Denver this week on a number of things;

1) Me...like some kind of dumb ass prophet telling two people in Seattle this week that Denver has mild winters. Going on to say March is the snowiest month of the year (met with skepticism and later by reality.) One woman looked at me like I had "horns in my head" (I do but they're covered by my red rug.)

2) My high school friend Beth who lives in Singapore and planned a trip home this week.  She prayed to the white "gods," rubbed her snow voodoo doll, and did some kind of Singaporian snow dance to encourage the white stuff to happen during her week home. Beth...please stop. It worked.

3) Me...packing one pair of extra underwear for a 24 hour out-and-back trip to Seattle on Monday. This is my tenth (or is it ninth) week in a row of business travel. The last time I did that (packing too light for a 24 hr trip) also brought on a blizzard right before Christmas to Parsipanny, New Jersey to try and get a purchase order out of T-Mobile right before the holidays. Deja-snow all over again. 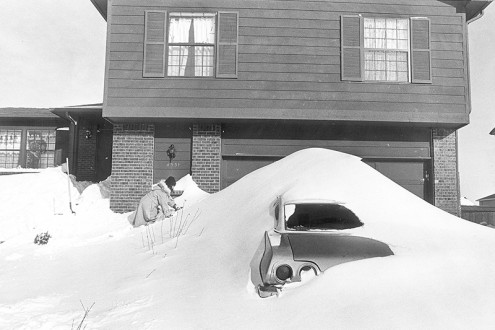 This reminds me of three of the most memorable blizzards in my lifetime and Colorado history. In 1982, my sister had one of her first apartments and we got absolutely dumped on. She was all alone...stranded, and I saved her by calling my high school and college friend, Scott McClure who owned a black (mini) monster truck. This thing could drive through anything, and it managed to pick her up AND get up our steep hill to celebrate Christmas appropriately in my childhood home. I think I paid him back in Jack Daniels...or at least told him I would.

Twenty one years later, I was divorced and financially forced to move back into my Mom's house (yes, that same house where we cooked German pancakes for breakfast once Kim arrived in the "monster truck" in 1982. I referred to it as "house sitting" as my mom split time between Colorado and San Diego, but was home (ironically) in March 2003. I "moved" to the basement where my older brother Tim, Tom, then Todd lived. If only that squash-colored yellow shag carpet and eighth-inch thin faux wood paneling could talk. I was dating my now wife at the time, but I was heading to Calgary for work.

Twenty minutes from Denver International Airport, I heard on the radio what I'd already suspected would happen. All flights were cancelled so I turned my car around to head home. It was an import car with all-wheel drive, but drove very low to the ground. By the time I got to the neighborhood hill...same one Scott McClure powered up, my car got stuck twice trying to get up Detroit Circle. I would eventually "throw out my back" with a thoracic muscle sprain that was so painful I thought I'd slipped a disk. I kept thinking to myself, why couldn't I get stranded with my "hot girlfriend" but (no offense Mom,) I limped into the house to spend a long weekend with my Mom. Yes, the power went out, and I eventually went on pain meds as my back was so jacked I couldn't sleep but an hour at night. #joy

That brings us to 2016, and my underwear...and me bragging about March snowfall to some hotel clerk earlier this week. Given the long string of travel weeks, I was bound and determined to make this an "in and out" quick trip for an 8 AM Tuesday morning meeting. The executive for the 8AM did not show, but offered 2 PM. I took the time slot realizing that likely meant getting home at midnight, but still only gone one night. The two PM went long (which was OK,) and halfway through, I began hearing about DIA getting shut down due to a bomb scare. The nation and world was on "high alert" due to the Brussels tragic events. It was a "false alarm" in Denver as the bomb-sniffing dog mistook a bag with oil and spices as something more sinister.

No harm, no foul. I booked another night at a second hotel near the airport and caught a second business dinner downtown. All seemed right this morning as I was exhausted, but went for a run. I dropped my phone in the gym, and thought nothing of it. The rest of the day went downhill. The phone slowly died, but not before my wife informed me my 3PM flight through San Francisco to Denver was not likely happening due to a blizzard in Denver. I spent two hours at Verizon (I still have no phone,) and over 70 minutes on the phone with United Airlines trying to book a flight home. United's first suggestion was Friday night (did I mention I left Monday for a 24 hr trip?)

After settling for a flight that gets me in 10 PM Thursday night, I decide that instead of buying a Samsung Galaxy S7 for $400 at the Verizon store, I will use my Asurion phone insurance, pay $150 and get a replacement S6. The phone conversation with Asurion;

Me: My phone is dead.
As(s:) Did you drop it?
Me: No.
As(s:) Did you get it wet?
Me: No.
As(s:) Then you should call Verizon warranty.
Me: I already went through this at the Verizon store. (I explain that if they find it's been dropped, they charge me $300 vs. the $150 to get an insurance replacement.)
As(s:) Then did you drop it?
Me: Well, I travel and everyone drops their phone. What answer do you want to hear?
As(s:) Sounds like you need a replacement from us.
Me: Yes, can you ship to my hotel before I fly home?
As(s:) Yes, we can get it to your hotel.
Me: Can you ship it priority so I can get it before I leave my hotel.
As(s:) Yes, it will arrive sometime between 8 AM and 7 PM.
Me: That won't work.
As(s:) You will get an email with shipping instructions, then you can call the carrier to discuss it with them.
Me: Please connect me with your supervisor.

After all that, I talk to her older twin and have the same conversation. She assures me it will get there on Thursday before I leave. I check email at 11 PM not able to sleep and feeling something was not quite right. Yes, I confirmed they are shipping to my hotel...on Friday. #FUBAR

Before I shut down the laptop, I set the old-fashioned alarm clock instead of my phone. Hotel number three is a nondescript Marriott Courtyard. Not the romantic scenario like I'd hoped for in the blizzard of 2003 with candles and my girlfriend (now wife.) Back home the teenage boys got the car stuck in the alley when Mom told them not to leave the house. Don't ask about my underwear. Deja snow all over again.

(Author's footnote: my thoughts and prayers go out to all those affected by the events in Brussels this week. Let's stop the insanity please.)