For those that have hung with me over the last two years (or longer,) thank you! A marathon is a tough journey and my twenty four months have been just that. I won't rehash all the injuries and setbacks, but I can say I have many emotions with my favorite race coming up and I'm not running in the 2016 Boston Marathon. At this point, I don't have a BQ for 2017 either nor a race on the calendar that could put me there. I do however have some very good news. 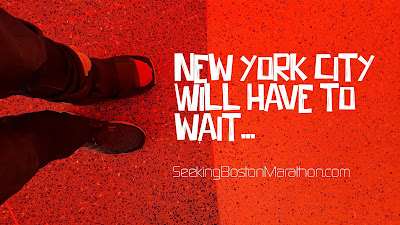 I quietly went in for (my fifth...sixth?...I've lost count) MRI a few weeks ago. My latest "bump in the road" is the stress fracture that bounced me out of the NYC Marathon last November. I have not raced a marathon since Boston last year ('15) which was a borderline disaster on a torn hip labrum. No surgery, but intense P.T. to get the hip in shape for NYC. Then the foot thing. I have not raced in any race of any sort since last September. Nearly seven months. That's a long time to go without racing for a run and race addict.

And now, for the good news...drum roll please...

My ortho called with the results last week that all signs of my stress fracture are now gone. He had given me a "soft" green light to start light training the month prior, but either my mind was playing games, or I just wanted to be certain, so I went in for (hopefully the final) MRI. All systems go.

With optimism renewed, I have increased miles, and tempo. Last weekend I ran for a full 90 minutes. A new first, or as my son used to say when he was little, "we haven't done that never in a long time." I also went for a speed fix on Tuesday for the fastest set of Yassos in months. Nothing earth-shaking, but went up to six half mile intervals of my typical (alternating) fast and faster sets. Two minute recovery intervals and ramped up to a six minute per mile pace. Booyah. I felt sluggish as if I'd never run before, but patience kemosabe.

Will hopefully get back to my fast and injury-free running soon. Not without a flurry of emotions including some tentativeness with my hip, my foot, my mind.