In my first triathlon earlier this month, I felt like I'd bombed the swim portion of the race...pulled a Gus Grissom...by panicking in the water. It wasn't exactly a panic, but I thought I was going to hurl. Not feeling quite satisfied, I signed up for the Highlands Ranch Splash Mash and Dash (SMD) triathlon a mere two weeks later. You don't suppose I have some healthy addiction issues do you?

My recovery from the previous Bec Tri was a bit of a non-event compared to how my body feels after a marathon so why not? The good part of the Highlands Ranch Tri was that it was on my "home court" with the start, finish and transition area a mere 1/2 mile away from my house. The first race I ever rode my bike to the start. At this stage of my early triathlon career (I only wish it was my career) I still have no idea what a good time is in a tri. Not a good time in the sense of did I crack a smile, but what's considered fast. I started studying the results from the previous year's race and realized my Sprint time from the Bec Tri was respectable and within range of the podium so I set two goals for myself; 1) improve the swim, and 2) go for it and try and grab some more hardware.

Aside from studying the times, I also studied the course and in fact did a dry run of the bike portion earlier in the week. If you've ever run or rode in Highlands Ranch you would know that it's anything but flat. I once again used a borrowed bike from my brother-in-law (a 15 year old "classic") that was better than anything else in my garage. We're talking old school with the leather straps on the pedals. I should have worn a leather helmet to go with it. The bike portion was a steady climb for the first 1/3 which turned the corner into an even steeper hill and turned another corner into another climb. As they explained at the mandatory race meeting, "what goes up, must come down" and the second half was practically all down hill. Only tricky part with that was a 90 degree turn at the bottom of the hill (turning onto Broadway.) My practice run was 32 minutes and change.

At the race meeting (and packet pick-up and body marking) the night before they explained the course, and added some safety tips (including be aware of the speed bumps heading in and out of the transition area on the bike.) We were going to swim four to a lane (WTF????) based on our 500 yd times. Only problem, I've never swam four to a lane and I had no idea what my 500 time was.

I had an idea on my 500 yd time, but I'd have to check my DailyMile posts and get a calculator off Google to figure that out. Nervousness set in on the swim part again. Please don't "Ralph" during the swim I was telling myself and what's a circle swim? They had the meeting at BikeSource and I was dealing with some serious bike envy. Good thing I didn't have my leather straps there bike there--they're akin to the skinny snow skis I have in the garage--but effective.

As mentioned above, I peddled my bike to the race start and began setting up my transition area. I tried not to be obvious, but I was observing others on how they rack their bike and lay out their goods. I spotted a couple shirtless males and started to second guess what I was wearing...would my tri shirt slow me down in the water, should I go commando? Gulp. The swim was part indoor (11 lengths) with a short jog to the far side of the outdoor pool for another 9 lengths outdoors. I found three others to group with in our lane who felt we were about the same pace. I'd learned last night what the etiquette was for "passing" another swimmer...a tap on the foot and you'd allow them to pass at the end of the pool length. My pace was brisk on the indoor portion and passed one other swimmer. I clearly need to work on my swim pace/endurance as I slowed down a bit on the outdoor portion and got passed by a couple women with their fancy flip turns. I don't quite have the flip turn figured out (at all.) Another long run to get from the pool out to the parking lot transition area. Swim time was 11:04. Grrr....that felt slow.

Not having much transition experience, the first one felt pretty good. Unlike my last race, this time I didn't grab my running hat for the bike ride. I started to put on socks then decided to skip that and slipped on my ru 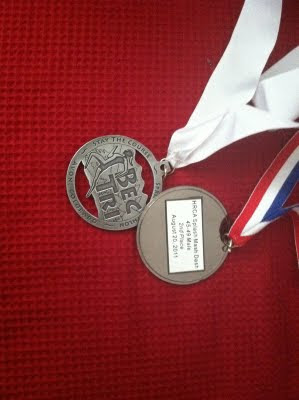 nning shoes for the bike portion. Transition time was 1:09...not bad, but coulda been better. I seemed to struggle a bit on the pedals then was off for the bike portion. I had discussed hand position on the handlebars with the experienced biker/triathlete at BikeSource the night before which I implemented and went into the climb. Just like my swim stroke two months ago, my handlebar grip was wrong in my last race apparently. With a staggered Sprint start and the Olympic distance race which started before the sprint athletes there were a number of cyclists ahead of me. Overall, I seemed to go back and forth with a couple of riders and passed a couple. The downhill portion was a blast as I was able to fly. Bike time over 9.5 miles was 31:40. I avoided wiping out on the speed bumps and flew through the transition area in 37 seconds.

Off to my strongest section...the run. As advertised the 5K run was not flat at all with climbs in the first two miles then "opened up" with the last mile downhill. I was hitting a sub seven minute mile pace for the last portion and finished the 5k in 26:40 and an overall race time of 1:11:11 (what a poker hand!) With a longer swim and tougher run course, this was a couple minutes slower than my last triathlon so there was no PR today, but for the second time in as many tris, podium! Second place in my age group and 10th overall male. Splash, Mash, Dash & CASH!

I was warned by many of my triathlete friends online (Morey, Skibba, and SugarMagnolia70) that I'd better be careful because these tris can be addicting...ya think?! I sense at least one more in the next month or so before I try and resume my marathon career as I'm still figuring this tri thing out.