So I decide to sign up somewhat last minute as a participant in the Denver Half Marathon. I figure; 1) It’s my hometown, 2) I needed to run 14 this last weekend anyway, and 3) I was in week 11 of my 18 week training program so what better time to figure out if all this work has made a difference.

No pressure…right? So, why was I a bundle of nerves the night before since this was a tune-up and really didn’t matter? The answer is my aforementioned competitive streak—see “Pink Torpedo.” 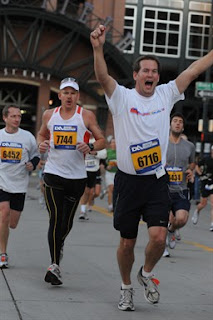 My previous (and only) PR was the Georgetown to Idaho Springs Half Marathon at 1:39 in 2008. If you haven’t run the Georgetown ½, it’s a VERY fast race as it is virtually all downhill. Some people don’t like downhill; I don’t have an issue with it and would prefer downhill to uphill—duh!

Signing up for the Denver Half, my mind starts playing games and I’m thinking to myself…I have over a year of training since my last marathon and I’ve trained this season longer, harder and faster than any previous training sessions. Given that, I would surely finish faster than Georgetown—so there was my personal challenge!

I went to the Denver Marathon (DM) runners’s expo on Saturday before the race. Most runners are like kids in a candy store looking at all the clothing, nutrition, gadgets and gizmos. I couldn’t resist buying the long sleeve DM shirt and got totally suckered into getting a “Power Balance” energy bracelet. One of those snake oil, too good to be true things you find at the show that’s supposed to give you an added edge—hey, Shaq wears one, so why not. $100 lighter in the wallet, and I was out the door with my lucky #7744 bib number, electronic tape timer (hadn’t seen one of those before) and visions of a new PR with my added “edge” I purchased at the show.

The night before ritual went well; laying out the racing clothes, shoes, charging the Garmin, having the in-race shot bloks set aside, pinning the race bib number to my shirt….hmm…forecast called for warm weather so I opted for the singlet. I also chose to run in my “Skins” brand compression tights—my first race test of the Skins.

Between the expo and the semi-sleepless night, you would have thought I was a 9 yr. old the night before Christmas. I woke up plenty early, and started the morning ritual; light carb load, (ahem) bathroom visit, hydrate, nipple and chafing area lube, dressing with the gear laid out the night before, and heading out the door.

My wife was kind enough to drive me down and deal with my anxious pre-race behavior. The race start was 7AM and I arrived just after six to seek out my running group; Runner’s Edge of the Rockies. It was good to see the group before the race and “Amp up” beforehand. Once again, I hit the porta-potty, but the only mistake of the day, was hitting it too early. As race time approached, I turned in my gear bag and realized I thought I might have to “go again.” The lines were WAY too long, and I figured once I got started, I would “sweat out” the liquids and desire to pee would go away. Not exactly. The good news is that I think I only lost maybe 15 seconds as I was fortunate to find a porta-potty around mile 4 or 5 and set a record for relieving myself. Ahhh…

The only other challenge pre-race was arriving too late at the corral. It reminded me of Chicago, because they had iron fences around the start of the race and it was PACKED. My options were to line up with the back of the pack around the 12 min pace or hop the fence. Like Chicago, I hopped the fence, but this time I didn’t rip my shorts. I was still quite a bit further back than I wanted (around the 9 min pace) but there was no moving up. As the race began, it took me awhile to actually hit the electronic “Start”—hit the Garmin start button and I was off.

Race day (especially in a crowded race) presents situations you don’t encounter in training. With DM expecting in the neighborhood of 10,000 runners it was crowded in the corrals and like the “running of the bulls” at the beginning of the race. You have to be careful, as it’s easy to get your feet tangled in other runners, and despite the best plans, I always seem to start out too fast.

The only thing that prevented me from running way too fast was the fact that it was sooo crowded and there seemed to be a lot of slower (perhaps inexperienced runners) that wanted to be near the front. In the first couple miles, I think I actually had to weave around some woggers. NOTE TO NEW RUNNERS: LINE UP IN YOUR APPROPRIATE TIME/CORRAL. This wound up slowing me down quite a bit as I couldn’t run my pace and had to weave around quite a few slower runners. I’d learn out after the fact, that I’d run a negative split (faster in the 2nd half of my face.)

The first couple miles presented a couple spectators I wasn’t sure that would be out there—my Dad, brother, and nephew. I don’t think non-runners realize how much that support helps and is appreciated. I also ran into a couple women in my 3:30 pace group from Runner’s Edge around mile 1 or 2. We were excited to run into each other and they wanted to know what my pace was going to be. I told them sub-8 minute and started to “take off.”

As each mile passed, I realized how good I felt, how fast I was running, and the possibility of a PR. Despite being advertised as a “flat course,” it had a few hills; notably, coming out of downtown, and in and out of a couple of parks. With that, it also has some descent related to those hills.

I also got a boost from my wife at two spots along the course (thank you honey!) which is again a big help. As I hit mile 10, I knew I had a PR within reach…as I hit the last mile and headed up Lincoln St. in downtown Denver, I felt great and continued to pass a few runners as I approached the final stretch.

As I hit the home stretch, it was almost surreal as there was quite a crowd behind the iron fences, but they were awfully quiet. I “egged on” the crowd and got a roar from them as I hit the last 100 yards, which made me run even faster. A new PR; 1:38:23 with an overall 7:31 pace.

The ironic part of the end of the race is that I ran into a fellow Runner’s Edge runner (Theresa) who was wearing the Boston Marathon jacket at the first group run I went out on after my injury. I remember thinking then, and again at the end of the Denver ½ Marathon, “I want that (Boston Marathon) jacket!”

Was it the crytonite Power Balance bracelet, the skins, or 400 miles of training? I don't know, but I'll take it! Another step in the right direction.

P.S. Did I run serpentine style, or am I the only one that recorded this as a 13.33 half marathon?
Email Post
Labels: boston marathon denver marathon marathon running