For those that don't have the privilege of living in Colorado, as a runner you have four very distinct seasons. The fall season is my favorite running time of the year as witnessed by two of my morning tempo runs this week. This morning's run felt like I was in so 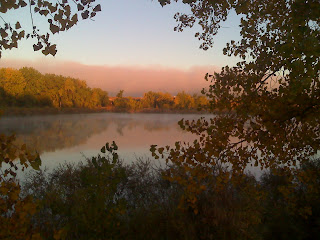 me kind of Robert Frost postcard. There was a panacea of fall colors on the cottonwoods lining the Highline Canal route combined with a low cloud cover and mist rising off the water (see for yourself with the camera phone picture I took to your right.)

I definitely had to "dress the part" as the temps were just above freezing at dusk, but the cool wind in the lungs felt awesome.

There's a reason that most marathons are in the fall--you have roughly 18 weeks of good warm weather in which to train which leads up to cool mornings. On race day, a cool morning keeps the body engine temperature cooler and there seems to be a boost when puffing in cool morning weather. That is unless you're running the Chicago Marathon. I can only surmise that the late Chicago starts are due to TV broadcasting schedules, the last two years have been brutally hot in part due to the late start. At last year's Chicago Marathon, I did my customary two mile jog the day before around the finish line area around 9AM and it was HOT! I knew I was in for a hot race the next day.

Other than Chicago, cool temps are a runner's best friend (I'll skip the rain and wind.)

While today felt like a postcard, tomorrow's postcard may look more like Buffalo, NY. Forecast calls for Snain--combination of snow and rain for my 22 mile run.