Another week with another week of travel with another opportunity to run in a different city. As runners all know, we get way bored with the 4-5 different directions you can run from around your home, but with a busy life, you still wind up going out that boring six mile “out and back” loop from your house. 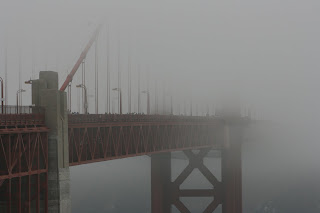 Tumi bag and sometimes doing a 10PM run on a treadmill at a Marriott Courtyard.

The “flipside” of the crappy treadmill at 10PM is a run in a great city. Having a job that requires travel affords me the opportunity to throw in the running shoes and “mix it up” with a run in another city. You almost get the euphoria of a race day when you get to lace ‘em up with a run in another town—see “I’ll Take Manhattan”—my blog about running in New York city this year.

My latest great run in a great city was . One of the greatest cities in the —my wife and I love to travel there with so much to offer and even took the kids there this year on a city vacation. As I’ve mentioned before, one of my greatest “bucket list” runs was over the bridge to Tiburon with a ferry ride back. If you happen to have a “hills” day on the training schedule, you certainly have those as it’s the hilliest urban city I’ve run in. 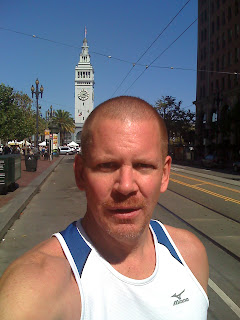 This trip provided awesome weather and had a modest four mile run on the calendar. Staying downtown, I had a number of directions I could have ventured out, but chose a run toward the financial district, then down to the embarcadero. I played an hour of “hooky” from work and ventured out late afternoon with the sun out and a cool breeze—AWESOME!

I had a bit of elevation on the first half mile out and on the return. The rest was filled with great scenery including the , farmer’s market, embarcadero, and .

All the above beats the heck out of dodging minivans on a early morning run in suburbia.

A footnote on the training program, I’m halfway through with one 20+ run under my belt with three more 20+ in the plan before taper. Knock on wood that the leg is holding up well.