The following is hopefully the first of many guest posts from Liam's Mom. This weekend, Liam was invited with a number of Team Hoyt athletes to visit with Dick Hoyt and race as special guests in the Holland Elementary 5K Road Race. Joan, Fabian, and Liam spent the day at Dick's home. Joan's account of their day. (Liam's story can be found HERE.) 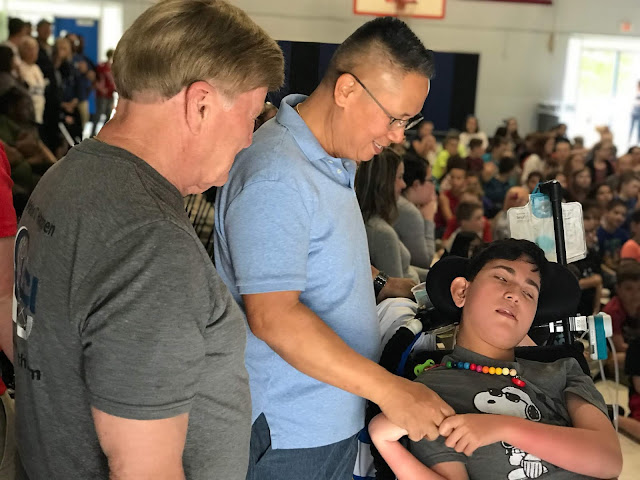 As a mom to Liam I have had many adventures. Medical adventures bring out my momma bear mode. It can be stressful. Racing adventures brings out the cheerleader mom. We have done Disneyland, hiked the rockies, played in the waves in Hawaii and met Jake Shimabukuro. All good stuff. This weekend we had another kind of adventure. We were invited to meet Dick Hoyt at his home. His home is often referred to as a “museum” by those who know his and Rick Hoyts story. Its hard to explain what its like meeting the idol of special needs parents. Its big time. 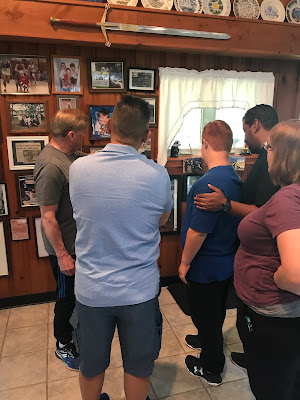 The Hoyt home is found on a quaint country road in Holland MA. It has a lake view. Its a humble home. As we parked we werent sure how to enter as we didnt see a wheel chair ramp. We were instructed to come around to the side in the other driveway. As we started walking around we commented how difficult it must be to push a wheel chair through the snow. And just then he came around the corner to greet and guide us. He smiled. His eyes smile too. He reached out to shake my hand and said “hello its nice to meet you” and then quickly pulled me in for a hug. He did the same hand shake hug for Fabian. He is a hugger!  He then reached down and laid his hand on Liam and said “hello young man, its wonderful to meet you.”

My mom heart exploded. I was trying to be cool for Liam. Trying not to cry at meeting a real special needs parent idol.  He paved the way for my son and so many more. He broke barriers never thought possible. Yes You Can is his motto and he believes it. And he makes it possible for this mom to believe it. Afterall my son recently completed his first triathlon with his buddy Ty because the Hoyt duo broke that barrier many times. Be cool mom.

We were then welcomed into his home. There were photos and awards through out. He graciously gave us a tour and talked to us. As he stood next to the Espy award he pointed out photos on the wall of his and Ricks very first race, a grandson holding one of their medals and a couple pics of Ronald Reagan. He relayed how he “called him up to visit him” because he and Nancy invited him to do it if he were ever in California. He explained how the President interrupted a magazine interview to spend several hours with him. As we wandered from picture and award he regaled us with the story behind each. We went from room to room. We discussed all the barriers he broke along the journey that he and his son have lived and traveled since 1977. 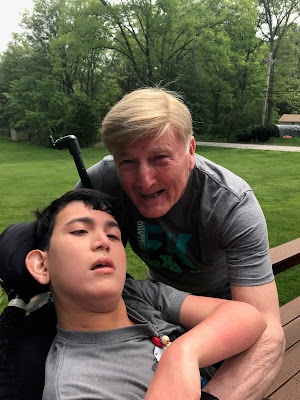 (Dick) became emotional once when he described an upcoming award. As we stood in front of an elementary school picture of Rick with a typed written award from him to his father for being a great dad and hero, Dick welled up with tears. He explained the upcoming award was being given to him as “Father of the Year” with all of his sons being present. Its that Dick Hoyt that's my hero. Its the dad. The parent. He gets an ESPY but the awards that make him emotional are the ones that celebrate being a parent. Doing a great job parenting is no easy task for anyone. He gets it. Its not about winning the races. Its about being in them.


Winning them  (races) is just another way to shine the light on inclusion. But running the race is the parenting win. Of course I cried with him. We had a moment. We hugged. We understood each others parenting journey. We hugged and cried quietly as we felt all of the emotions. In my hug to him I whispered “thank you. I could barely say more.


We then gathered ourselves and continued on our exploration of the Hoyt family home and museum. As we departed we took photos together. And then just like old friends he asked for help loading some grills onto a truck for the annual 5K race at Holland Elementary school in the morning. And just like that my special needs parent hero made my day and year. He will never know all the details of how he impacted our life. There would be no “Liam and Ty’s Big Adventures”. There wouldn’t be Liam and Ty Seeking Boston Marathon to dream about. Without his efforts we would not be in the most loving and exciting relationship with Ty. Ty loves Liam. Liam loves Ty. And that fills my momma heart with joy!

Yes you can son.

For the record I tried to be cool. But Dick cried first!!

(If you aren't familiar with Dick Hoyt's story and how he inspired many athletes, see his YouTube Jimmy V Perseverance Award below.)


A very special thank you to Dick Hoyt and Team Hoyt San Diego for driving "inclusion" in communities!!!