Mixed Emotions on My First 2016 Podium

I'm not even sure where to begin. Perhaps to start with a question, "is there ever an asterisk on a podium finish?"

Let's back up a minute. I realized last week that I hadn't pinned a bib to a singlet in nearly eight months. I literally kept counting the months on my hand thinking, "this can't be right." Sure enough, my last race was last September at the Highlands Ranch Half Marathon. That was supposed to be a tune-up race prior to the New York City Marathon on November 1, 2015. The foot stress fracture phone call a week before New York, put that and my foot on ice.

Since then; it's been the walking boot, the time off, the physical therapy, the strength work and lots of swimming and biking. Perhaps being somewhat superstitious, I've been a bit quiet about my "don't call it a comeback" with respect to running. I finally decided, I need to put my "big boy pants on" and "shake the rust off" with a 5k.

In parallel, my college-aged daughter has started to run more and asked if we could run a race together. My answer was an emphatic "for sure!" We talked about doing the infamous Bolder Boulder Memorial weekend, but as usual, I was going to be out of town. We settled on the Girls on the Run 5k in Denver. Her sorority is one of the race and volunteer sponsors and she's helped out the last three years. Last year, I "crashed the party," and helped fill water cups in the rain for the race.

For starters, Girls on the Run is a fantastic organization promoting fitness and introducing run racing to (largely) young girls. Their mission is to "inspire girls to be joyful, healthy, and confident using a fun experience-based curriculum which creatively integrates running."

Sounds perfect, but this is where the story breaks down a bit. Above-said daughter said she wasn't going to run this year, but volunteer again. Nevertheless, she lives out of town, and I wanted to see her. Her youngest brother needed a tune-up 5k for his upcoming triathlon season and his manager (aka Mom) signed him up for the Girls on the Run 5K Denver.

I debated back and forth between volunteering again, or racing with my son (and daughter handing me water from the water station.) I went to the race website the night before and the image of the race is inspiring, but there's a sea of young girls lined up for last year's race and ONE GUY with his fingers on his Garmin ready to bolt out of the start.

This is a good time to point out, I've tried to chose my words carefully writing this post without sounding like a complete jerk.

I decided to race based on the following; my daughter will be there, my son will be there, and I need to get over my fear of racing again. I figure all the right reasons and just go out and have fun. My son and I line up for the race and it looks just like the race website. Ton's of excited little girls; some racing with mom, or dad, or their volunteer coaches. This definitely (no offense intended at all) had the makings of a 5k run, not a 5k race. My son and I didn't even inch up to the front of the start leaving probably 50-75 young girls ahead of us. 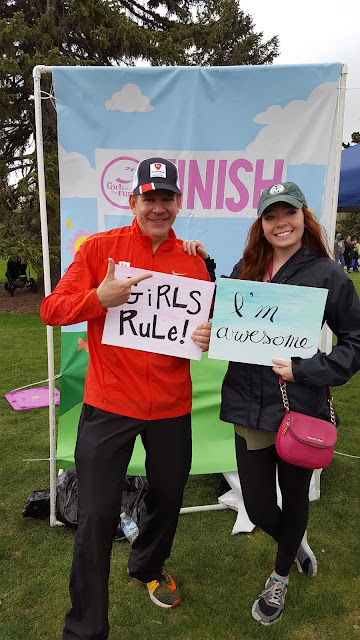 Once the gun went off, I forgot it was a run, or that there were a lot of young girls perhaps racing for the first time. I careened off to the side and slowly moved to the front of the pack. There was definitely some rust as my breathing was off, I was sore, and overall felt pretty sluggish. My son jumped out front around the one mile mark and I slowly slid from sixth, to fifth, to third by mile 2.5-3. The other adult runner that was racing in the second spot missed a turn and ran straight through a row of cones.

I was thinking, forget that I'm beating 2,000 little girls, this might be the highest placement I've ever had in a race. In the last three tenths of a mile, the guy that wandered off, had caught back up to me and passed me. He was (in a playful manner,) looking behind and slowing down and speeding up taunting me a bit. At that point, my race adrenaline kicked in, and I sprinted the last stretch towards the finish. Like some kind of idiot, I leaped across the finish line mats. Perhaps I was thinking of the Kentucky Derby that would happen later that day. Red Zinger wins by a nose!

In the end, I forgot who I was racing against, and was happy to have crossed my first finish line in eight months. I'm hoping there was no video as I think I did the "washing machine" and "Charlie Brown" dance. No, I wasn't gloating about being faster than the largely young girl entrants, but thrilled that I ran a race again. Son came in first, dad came in second. My highest overall placement in a race with my slowest 5k time in a long time, but a near-perfect day.