By now, you've got all your holiday shopping done, and have poured through countless runner holiday buyer's guides. Yes, a lot to drool over, but after shoes and perhaps a Garmin, what else do we really need? I have something you can add to your list before the end of the year that does not cost anything, but provides the greatest reward you might give and get this coming year.

This last year (and a half for that matter) has been the most challenging time in my time as a runner, but nothing compared to what my new friend Liam has gone through. I met Liam through I Run 4 Michael. I had noticed a couple of my online runner friends (including Michael Scott from Run Nerds Rock) were posting their runs on twitter and Instagram and were tagging and sending out positive messages to a special online friend.

I was curious about I Run 4 Michael and discovered that they "match up" runners with (primarily) kids (and some adults) with special needs. Safe to say that these "buddies" cannot enjoy the gift of running like many of us. For them, it allows them to live vicariously through runners as we post our daily training and perhaps triumphs in races. The organization asks for very little; perhaps 2-3 posts a week tagging the parents on Facebook.

In the case of my running buddy Liam, he can't read the posts as he is blind. His mother Joan reads them to him. She (politely) reminds me to try include other senses as he can't see the photos. I try and be descriptive and even wrote a race report this summer (Road to Redemption: Through Liam's Eyes.) She (and Liam) ask for little, and I get so much more than they can imagine in return. Liam has truly become my "buddy."
Liam was born in Naples Italy while his parents were both active duty Navy. He has three older brothers. Ken age 30 works for the state as an analyst. Colin age 27 in the US Marine Corps. Myles age 27 in the Navy. Liam was born with hydrocephalus, which is "water on the brain." He was 10 pounds 10 ounces at birth, and was immediately flown back to the US for treatment. Liam had his first shunt surgery at day 3 of his life at Walter Reed Hospital. 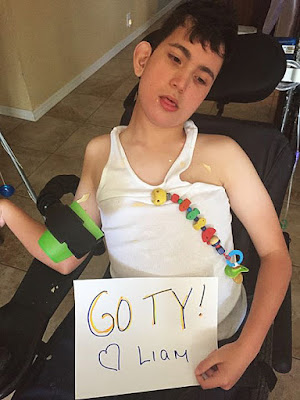 Due to complications and ongoing medical treatments, the family eventually relocated to San Diego, CA. Liam does not get to experience the thrill of running or racing as he's confined to a wheelchair. He also battles cerebral palsy. From November 1998 through August 2000 Liam had four major brain infections and over 124 brain surgeries. In other words, he has had more surgeries than I've had races (I'm approaching 100.)

Despite all these life challenges, you will never find a kid more full of life. He loves music, Cheerios, and loves being in the water with assistance from his Dad, Fabian. His mom tells me, "He can strum a ukulele and slam some sound out of a snare drum too!" After my triathlon accident in 2014, I returned to the same race to exorcise some demons and gain some redemption. I was not really ready to race (this July) as I was dealing with my own setbacks but Liam provided the motivation to not just finish, but podium.

I have not met Liam in person yet, but plan to soon. I mention the above race as I sent my medal along with my sister on her visit to San Diego earlier this year to give it to Liam. It was some serious "bling" but it would merely collect dust in my office. It was special to me to let Liam (and his mom) to share the victory (shown in the YouTube video above.)  He's often seen with something in his mouth.  His "binkie" is always in his mouth or hanging out nearby. I was excited to see him put the medal immediately in his mouth, but was worried about the dental bill if he chomped too hard into it!

Getting back to the "gift," enjoy all the run gear you might get this holiday season, but I'd highly recommend checking out "I Run 4 Michael" as it's the best running gift I ever got. Tim Boyle (founder) posted last week that they are lacking runners to match up with buddies. I told Tim, I'd spread the word. Match up with a buddy HERE.

Tim Boyle started I Run 4 Michael after getting inspired to run for more than health and weight-loss by a viral meme saying, “I run because I can. When I get tired, I remember those who can’t run, what they would give to have this simple gift I take for granted, and I run harder for them.” When Tim shared the meme, Michael, a 50-something man with Down Syndrome, replied, “You can run for me any time!”

Launched as a private group of 10 runners and buddies with special needs (20 total) who shared workouts and health updates in a private setting, IR4 rapidly grew to over 22,000 members and nearly 7,000 matches, with 3,500 athletes waiting, within 18 months.