Summers are meant for disaster movies, not race disasters.

I googled the word "revel," and it is defined as "enjoy oneself in a lively and noisy way." I proceeded to google the opposite of the word "revel" and it's simply, "dislike, or hate." I imagine the later words largely apply to those that were left high in dry singlets and fresh legs when the Revel Rockies half marathon was cancelled in the early morning hours of the race on Sunday. I feel bad and I wasn't even signed up
for the race. It was a race I absolutely would have raced in as I drooled over the elevation map (but didn't as I'm nursing back from injury.) Others traveled far for the marathon distance in hopes of a BQ within the shrinking window for the qualification and registration in September for the 2016 Boston Marathon.

There have been plenty of stories around races being cancelled for "acts of God" or "mother nature"--think New York City Marathon in 2012 when the marathon was cancelled when 40,000 of the 47,000 had already arrived in the city. They had a colossal storm (Hurricane Sandy) wipe out much of the area and it was understandable that they finally cancelled the race for obvious reasons. Back to the Revel Rockies, it was colossal alright, a colossal f*ckup.

What was the issue? Revel contracted with ATS busing to provide transportation up the hill for the runners in the point-to-point race from Evergreen, CO to Morrison, CO. The problem? Reports of only a handful of buses showed up with thousands waiting in line for hours in the cold with little to no information until a Facebook post announced the half marathon was cancelled. The estimated 52 buses were supposed to start showing up at 4:15 AM. Perhaps they got stuck at the 25th Annual Hootenanny "after party" in Denver with a little too much in their hookah pipes.

Seems odd that likely months and months that go into planning with a narrow highway relying solely on buses could go so wrong the morning of the event. We can't blame a daylight savings time change, but why did a couple buses show up out of the 50+ that were scheduled? I reached out to American Transportation Systems for comment with no response as of the posting (I've always wanted to say that. #hackjournalist posing as a blogger...or is it the other way around?)

Without "dog piling" too much, there were some good stories that came out of today including BQ's, PR's, and age group medals (that were massive) with a number of my friends. I had plenty of friends who actually scrambled into another race in town. On my run this morning along the Highline Canal Trail, I saw a pair of women I recognized with their race bibs on. I wondered at the time, "that's odd," or "I wonder where the other race participants are"--there was no race on the canal today, but they turned their lemons into lemon gels.  Then there was a bit of the wrath on Facebook; 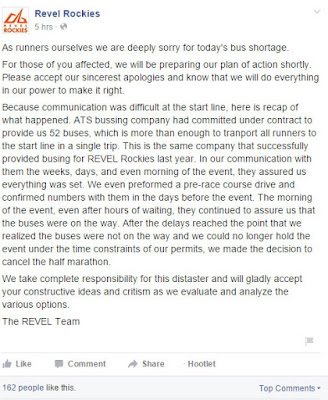 Jay (fellow race team member,) "Crap, they told the 2000 of us waiting for buses it was canceled."

Michael: "I talked to people from across the country who had spent some serious money on airfare, hotels, rental cars, etc."

Malia: "While frustrating (that's precious lost sleep time, haha!), I feel the worst for those who this was going to be their 1st half. All the training and emotional effort put into this one morning!"

Michael: "F*ck you for ruining my weekend and costing my family hundreds of dollars in travel expenses. You stupid f*cks."

Ouch, serious venom. Given all that, I do feel sorry for the race director and organizers. They finally put out more information later on Sunday. So shattered, they couldn't even spell busing (bussing.) They shared the bus mishap with ATS, and offered that they "take complete responsibility for this distaster." Yes, sadly, it was so much of a disaster, they couldn't even spell disaster. 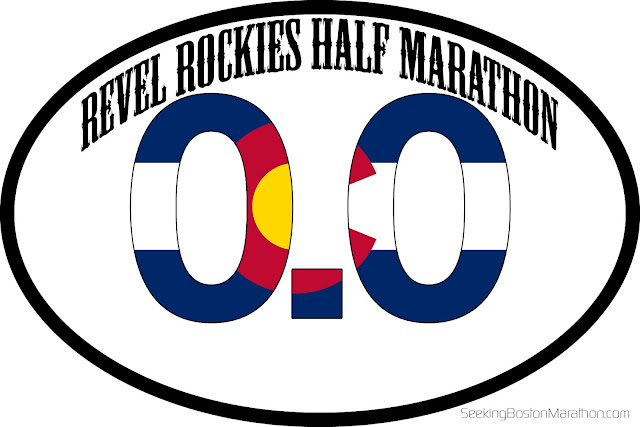 Local race directors did start offering some consolation with discounts into their upcoming races including the Endurance Race Series who allowed runners to drop into the (not exactly) nearby Longmont Marathon the same morning. Another "fast" Colorado downhill is offering deals for the Georgetown to Idaho Springs Half. So cool. For those left "high and dry"you're sadly left with the VISA bill and the famous prophet "Dean Wormer's" not exactly calming words, "zero point zero."