My first triathlon of the season (Pelican Fest Tri in Windsor, CO) was a bit of a disappointment. My podium streak ended, I floundered in the water, and came in sixth in my age group. Sometimes you need to take a step backwards to take a step forward. As I often do, I take a problem "head on." The bike and run in that first race were respectable. My swim however was horrible and the transitions needed some work. Three weeks transpired between race number one and race number two of the 2014 triathlon campaign so I sought to correct those problems.

I had three great open water swims and finally became comfortable in the water. I worked on sighting, but knew going into the race, that it still needed work. Transitions were the easy part as I've done enough races to know what works for me, but I also added some practice sessions in the days leading up to the Cresent Moon Sprint Triathlon. 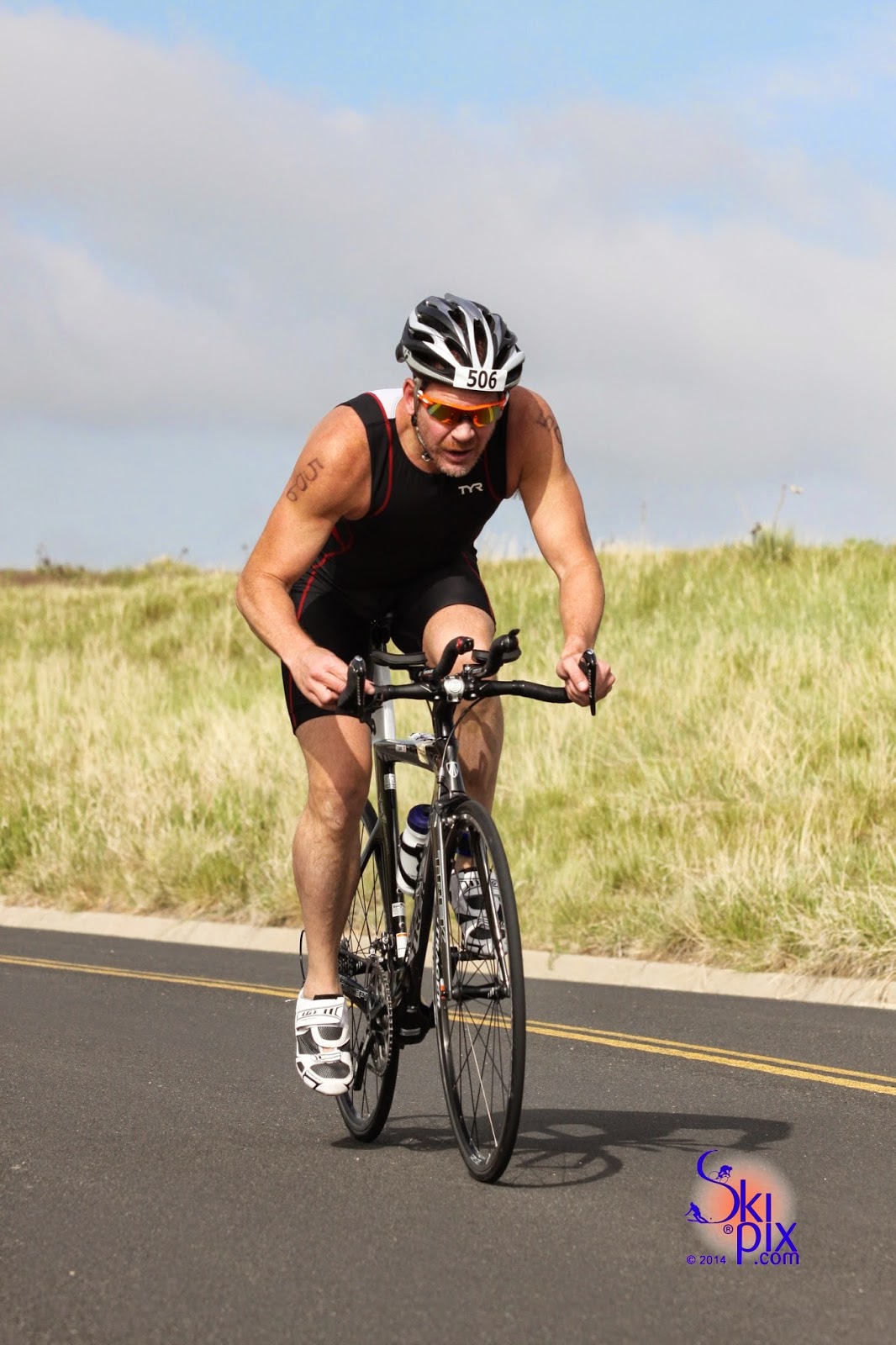 Cresent Moon took place at the Aurora Reservoir in (of course) Aurora, Colorado. I raced there in 2013 at the Tri Rock Triathlon and did quite well. This gave me confidence.

The night before and morning of race routine was just that--routine. As a sprint white cap wave triathlete, I wasn't projected to start until 8:15, but still got to the transition setup early that morning just after the 5:30 corral opening. I remembered my USAT card (unlike last time,) checked in, and settled into a great bike rack spot near the transition (to bike) exit. With plenty of time on my hands once I was set up, I used the extra time to try and scope out the race buoy course and look for "sighting" landmarks across the choppy (fairly windy) water. The sun was still low on the horizon so the swimmers all mainly looked into sun glare. After a second bathroom visit, I started my routine of downing some Generation UCAN 30 minutes prior to the race. I also did a few short laps in the water to warm-up. Warm-up was probably the wrong word as the water seemed quite cool even in a wetsuit.

Once the race started, I began to feel inexperienced again in the water. As I mentioned, the water was cold, and there was a fair amount of chop. I sighted more, but my breathing seemed labored. Oh no...not water panic again. I did my best on sighting, but it was anything but smooth. I did better, but at least one more time on the outbound swim I veered off course. Once I got past the second buoy and started to turn right on the box-shaped course, I seemed to get into more of a rhythm.

Once past the second (last) turn, the sun was at my back and I had a strong view of the red flags, blue roof awnings, and green trees that were my target on the beach. My breathing was more rhythmic and less 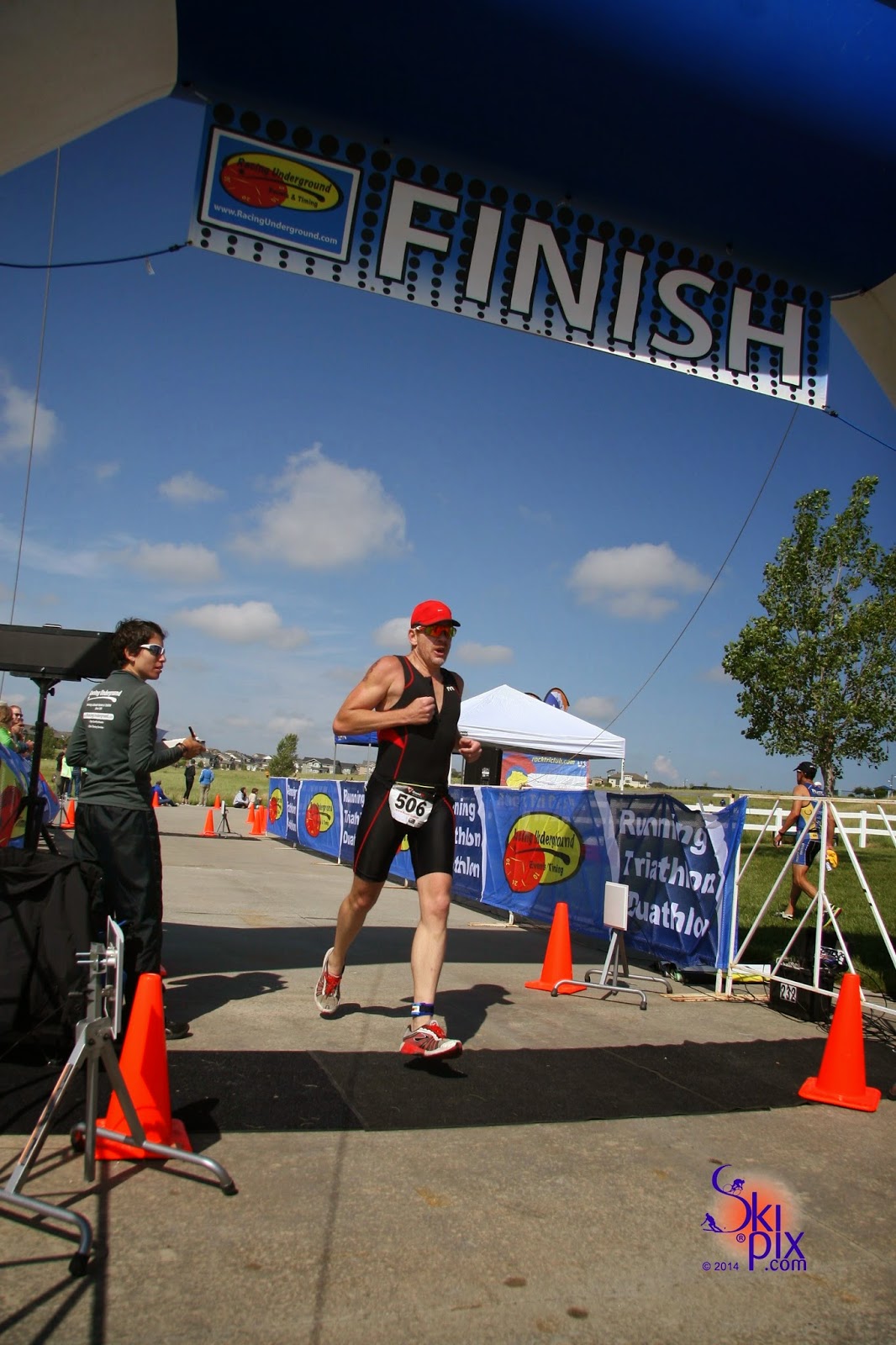 labored. My sighting was better, but still veered off to the right a bit (my natural swimming "shank.") While the course was 750 meters vs. the last race which was 800 meters, I was over two minutes quicker in the water--that just shows you how bad my last race swim leg was vs. I "killed it" on this one. More later on this.

This bike course would prove to be a bit more of a challenge as it was anything but flat, and we head into some headwinds on the main stretch of the out-and-back course. I knew I was behind many of the Sprint triathletes and most likely the stronger swimmers in my age group. I went out fairly aggressive on the course getting out of the saddle on two of the hill climbs. I lost track of how many I passed, but there was more than a dozen. There were two "fast bike" triathletes that passed me on the return as I'd slowed a bit...I'd hoped that I hadn't overdone it on the outbound.

My second transition (T2) was even better than the first. I slipped out of my bike shoes around a 1/4 mile in from transition and peddled in on top of the shoes. I almost had a dismount violation and came in fast in the transition area. My run shoes went on quite quick using the method I'd practiced. I grabbed my run hat (it was getting hot,) and race belt and I was off. My race belt had a second goo pack I wouldn't use, as I'd ingested a Hammer Gel on the bike leg that I'd taped to the center cross bar on my bike. My bike goal in any race at this point is to average 20 mph or greater. I knew I'd fallen short with the effort, wind, and hills. I knew I'd gained on some athletes, but had even more to gain on the run. 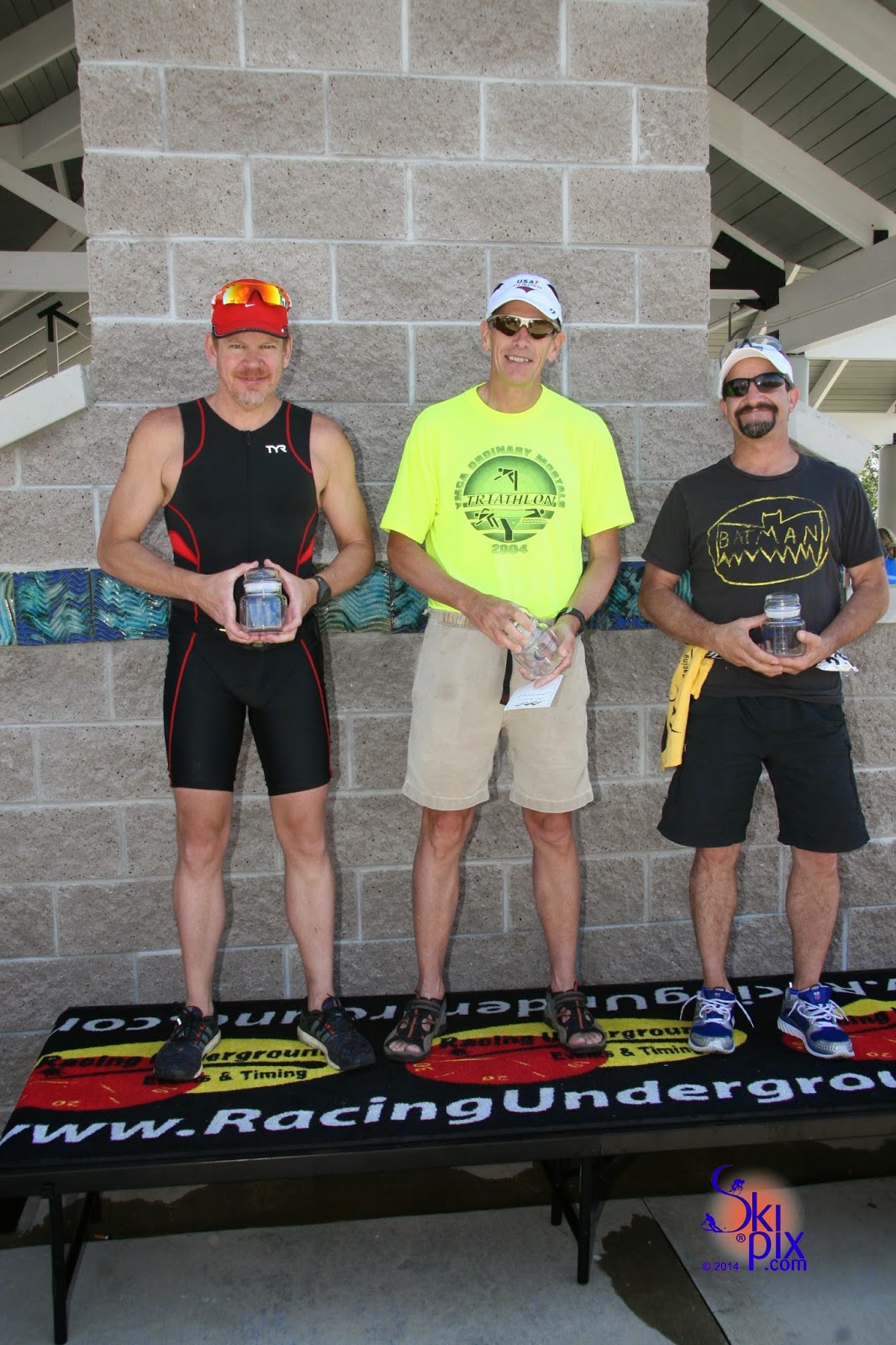 As a runner turned triathlete, triathletes hate me (not literally) on the run leg as it's my strength. My other minor mistake of the day was that I'd left my Garmin (still running) on my bike's handlebars. I still have not bought a triathlete watch and could have used one on this day. I had to run the 5K by "feel." I did not scout the run course as I did with the bike course the night before, but I knew it had hills. Sometimes it's better not to know. I went out aggressive on the run and immediately started "picking off" runners and not just the old guys (in my age group.) Women, kids, young men stared at the ass end of Seeking Boston Marathon. With an out-and-back run, I was able to get a glimpse on anyone ahead of me. I knew there were too many to get a top ten or top five overall, but I'd only spotted a couple that could be in my age group. I passed them and finished strong once again on the run.

As I resisted the urge to throw up, I went over to the finisher's table, but not without first "eyeballing" who was already in the finish area. They were all younger than me, and I went to enter in my bib's digits on the keypad which printed out (like a cash register thermal paper roll) my results. For over 40 minutes, I reveled in the fact that I'd come in first in my age group. I even went back and checked a few more times. Sadly, the final sheet revealed someone came in 30 lousy seconds faster than I. I smoked him on the run, close on the back, faster in transition, but he was three minutes faster than me on the swim. I knew that would be the difference. He must have started with a later wave as I didn't see him on the course. #grumble

I can't complain as it was nice to get back on the podium and grab some hardware. I also know that I improved on some aspects of my game, but there's huge improvements I can still make on the open water swim. For now however, I will set aside being a triathlete for 3-4 weeks as I prepare for the Slacker Half Marathon on June 28th running from Loveland, CO to Georgetown, CO. Just like my triathlon game, I have some "unfinished business" I hope to take care of on that mountain course.

As a footnote, thumbs up to Racing Underground for a well-organized and fun race. Only constructive criticism, what was with the candy jar as an award. I will never turn down hardware, but that was a confusing choice.
Email Post