I started going to Broncos games at the age of nine years old with my Dad sitting in the old "Mile High Stadium's" "South Stands."  The South Stands were the equivalent of the original "Dog Pound" in Cleveland, but better.  I sat in the old high-school style bench seats without backs.  As the years wore on, the metallic
seat numbers fell off and fans would pack in so tight, there was no room to move.  We had four seats.  Two in front and two in back.  We would joke about who had to sit in the "Joe Row."  Joe was an old curmudgeon who would bitch if anyone left during the game to go to the bathroom.  This happened often as this was the South Stands after all.  The rowdiest section with the most beer consumed and the most fights.  While I tried to behave when opposing teams would sit in our section, most were not so kind.

When I wasn't at the games, I watched all of them.  Vacations and weddings in my family took the Broncos schedule into consideration when planning.  There were lots of Broncos parties and when I graduated college, I started the "Pony Club" which round-robin'ed away game parties to my friends houses.  The first "Pony Club" was in 1986 which was the second time the Broncos went to the Super Bowl.  The first was in 1977 under coach Red Miller.  I Stabler's (Oakland before they moved to L.A. and back to Oakland) Raiders to advance to the Super Bowl to lose to the Dallas Cowboys.  somewhere in my crawlspace, there are Super Bowl buttons and a program from that year.  My sister Kim took my Dad to the New York Giants Super Bowl in Pasadena.  That was the second of four disappointing loses in a row at the Super Bowl as John Elway was getting the rap for not being able to win the big one.
remember being at the AFC Championship game that year when the Broncos beat Kenny

Before they moved to the new Sports Authority stadium, there were plenty of great memories.  The twins (Bill and Bob) who sat behind us had a little too much anti-freeze during the game and jumped up to celebrate a touchdown.  My brother and I caught Bill (or was it Bob) and while he lost his balance, he did not lose balance of the clear plastic cup holding his beer.  We would joke for years about saving his beer.  Joe's son would bring his son and his wife, then his second wife.  Joe's grand kids grew up to bring their wives.  When Shannon Sharpe arrived in Denver, he became known as "The Hulk."  My brother and I would often hang banners made from old bed sheets over the steel railing onto the South Stands wall.  I created an "Incredible Hulk" banner that hung from the South Stands until Wade Phillips (the then head coach) lost an embarrassing game to the Raiders.  We were so pissed, we left the banner behind.  I was then pissed that I left it behind and created a new one.  The second "Hulk" banner  hung in the South Stands for years.  We'd arrive early to get the best spot to hang it. 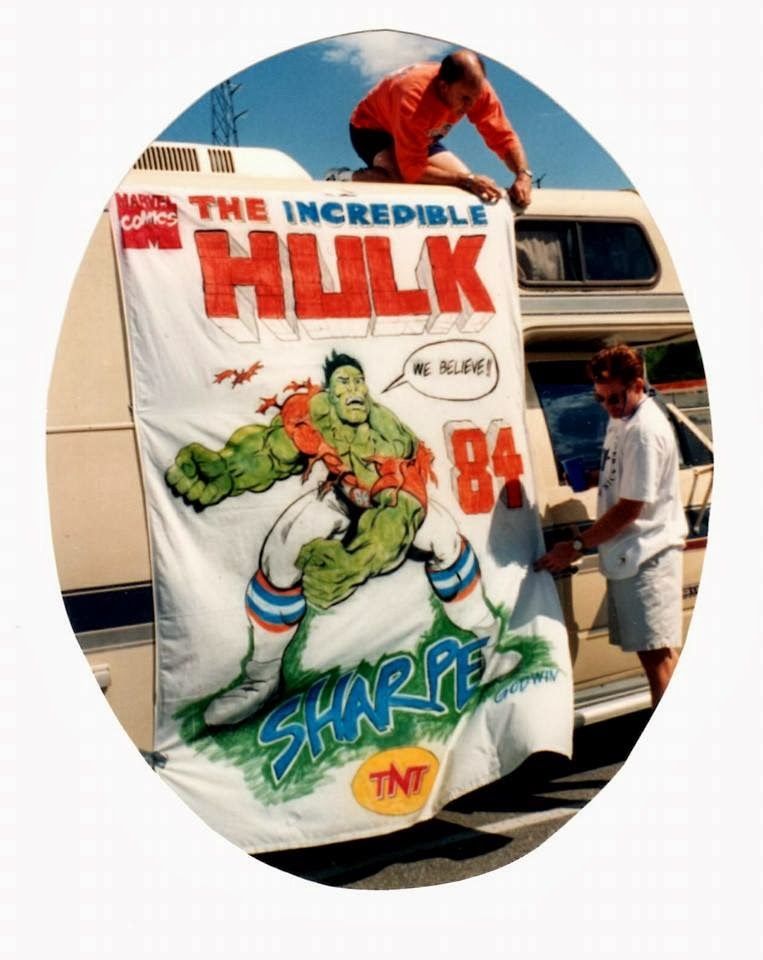 One year, Shannon had his best game as a Bronco catching three touchdown passes, all in the South Stands.  I recorded the game as I often did on VHS and watched and listened as Dick Enberg announced and said, "he's pounding the peacock" as Shannon went over the banner to tap the peacock with the ball he'd just caught the game-winning touchdown with.  It was my fifteen minutes of fame as a local beat reporter interviewed me after the game.  His name?  Adam Schefter of (eventual)ESPN fame.  Shannon's girlfriend got in touch with me and contracted me to create one for his home.  I didn't want to get paid, but suggested a signed ball or jersey and to watch a game from the sidelines.  I got two jerseys (I think she signed them) and didn't get to go on the field.  I didn't care as I did it for the love of the game.

There were a lot of other memories including Floyd Little's last home game, heckling Al Davis about chasing off Mike Shanahan, and the last game at Mile High where many of the fans tore up the South Stands orange fiberglass benches (there might be a chunk of it in my garage at home.)  My brother and I were both fortunate enough to attend Super Bowl XXXII.  We saw Elway do "the helicopter" and were a couple of the last people (including the Broncos "Leprecaun" to leave the San Diego Stadium parking lot that night. 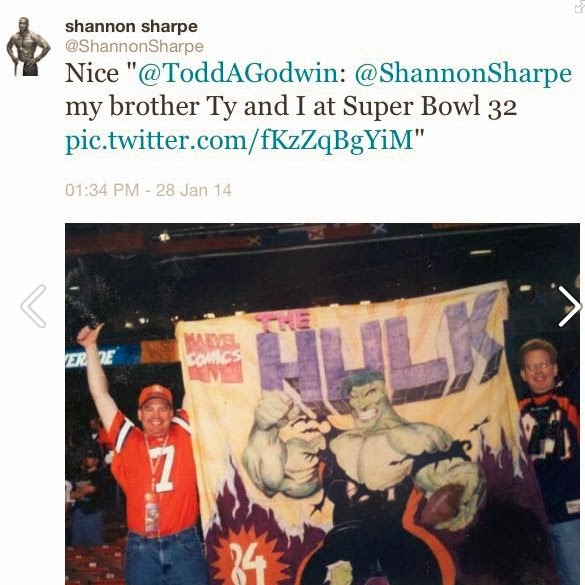 One infamous previous year, it was snowing like crazy and we met up at the Village Inn pancake house around noon to meet for the game.  Everyone bailed on going to the game but me.  I was not going to let a few snowflakes get in the way of a football game.  I still joke with my siblings asking them if they are "pancake eaters" or Broncos fans.

We moved to "Club Level" in the new stadium and watched as Ed McCaffrey broke his leg the night before 9/11 against the Giants.  After a few years, we made the tough economic decision that $1,000 a game didn't make sense as kids' college educations took priorities. We gave away our priority number and our seats dating back to 1960.  Five years ago, my dad started working at Sports Authority working in Guest Relations.  I joke that he gets paid to flirt with the women in his section...the "apple does not fall far from the tree."  He's harmless in that regard, but loved by his wife, kids and the fans in his section.

Last Thursday night, I got a phone call from my dad asking "would you like to go to the Super Bowl?"  I thought he was joking, but he was not.  He couldn't stop crying as the Broncos drew one lucky name out of many that work Guest Relations and my dad had won two tickets, hotel, and airfare to the game.  I'm sure it was a tough decision to pick his seat mate for the game.  We have both been there for each other over the years, but perhaps he was just looking for someone that wouldn't opt for pancakes.

Tickets to the game.
Airfare.
Hotel in downtown New York City at the Marriott.
Pre-party and celebration (invite only) party.
Free.
Watching a Super Bowl with the Broncos in it?  Priceless.