I have always had a nerd streak in me.  When I was in grade school, I started a bank.  Not a piggie bank, but an actual bank.  My aunt Marge was the only one that made a deposit.  I collected cans and hangers and turned them in for cash.  I started a hotel (more of a restaurant) in the garage attic across the street and sold food to the neighborhood kids out of it.  My older brother threw away a slew of automotive stickers that I found in the trash, took to school, then sold them for a tidy profit.  With all that in mind, I always had goals for myself. 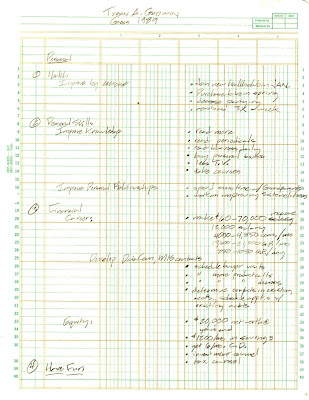 As I got older, goals went on written paper.  Being a "pack rat," I save a ton of stuff that doesn't make sense at the time.  I have nearly all my airline boarding passes over 20 years of traveling.  I'm not sure why I save them or what I will do with them someday.  Every once in awhile, I go looking for something in the crawlspace of my house and discover something interesting.

Being a nerd and with goals in mind, I set pencil to paper and laid out some goals in 1989.  I came across them and found it interesting enough and too funny not to share.

This one cracks me up.  While I was involved in a number of team sports as a kid, I didn't participate in team or individual sports in high school.  It would be nearly ten years later that I would take up running as a

sport.  My goal in 1989 was to join a new healthclub in January, purchase a bike in spring, decrease partying (hilarious,) and aerobics 3 x a week (even more hilarious.)  That was such an 80's thing, and no, I did not wear leg warmers, leotard, or head band.  I do however now own running tights, run hats with head band sweat protection built in, and one "bitchin' race bike."

I listed my goals as read more, read periodicals, read business daily, buy personal books, less T.V. and take courses.  I'd have to say that I have done slightly better on most of these, but don't read for personal pleasure nearly enough.  I should add "write more" to my list 25 years later as I'm doing much more of that with this blog.

The other goal I had listed here was spend more time with grandparents and work on improving sister relations.  I feel great about the time spent with my grandparents and have many fond memories.  They are unfortunately no longer around, but I still reflect on the great times I had with them and share their stories with my kids...including my grandpa's propensity to cuss while playing cards.  The sister one baffles me as I have a great relationship with my sister that lives here and my other sister in Seattle.  I must have fixed that one effectively because I have no idea why I wrote that one.  Perhaps because she had some "hot" friends.

The funniest one of the bunch here was to have $20,000 "net worth" by the end of the year.  I won't discuss details other than I "hit" this one and I have three kids going off to college starting with the first this fall.  I'm still saving (or trying to anyway.)

Not boring you with work, but ironically two of the details I listed here to achieve those goals was to "schedule more product calls," and "schedule more product demos."  I'm still in sales and still doing both.  Today I had a call with a business partner and the title of the meeting was, "identifying options for demonstrating...(system.)"  The more things change, the more they stay the same.

Some things don't change.  I love my life and family and still work very hard on this one.

The irony in looking over these goals is the reason I started this blog was I had a goal of qualifying and racing the Boston Marathon.  I ran my third this last April.  I suppose the lesson learned there is if you want it, "put it in writing" and you're more likely to succeed.

In fact, as a marathon runner and triathlete I have become somewhat obsessed with goals.  I work out seven days a week to achieve those goals.  I have a half marathon this weekend and have very specific goals I've set for myself.  Perhaps I should write them down and put them in the crawlspace to review in another 25 years.