By all counts, 2012 was a success for SeekingBostonMarathon.  I "punched my card" again for Baaahsten by qualifying and surviving the registration lottery gauntlet.  I only ran one marathon in 2012 (Qualifying at the Colorado Marathon,) I ended my run season with a respectable showing at the Denver Rock and Roll Half Marathon with a 1:36 time (a course record for me.)  Not bad considering I'd spent only a third of my time on running for five months after Colorado.  Like last summer, I spent the Spring and Summer trying to learn this triathlon game.  I was pleased with my triathlon season as I hit the podium in three out of four races and notched my first "First Place" at the Denver Triathlon.  I was duly warned that should I try one (or TRI one,) triathlon I'd be hooked.  So true.  I now have two addictions (marathon running and triathlons) that I can put in print.

In other words, I left October oozing with confidence, but November and December were marked with sporadic training (with little running) due to my "off season" and health issues.  The later was nothing major other than a six week sinus infection battle and leg pain that lead to an MRI.  Good news is both seem to be behind me with a green light from the ortho to train for Boston (see "Bone Up" post.)  Only problem once I got the Doc's clearance?  I had little base in terms of running mileage and I'd started three weeks late based on my typical 18 week training plan.  Starting late, no coach, no plan, no problem...right? 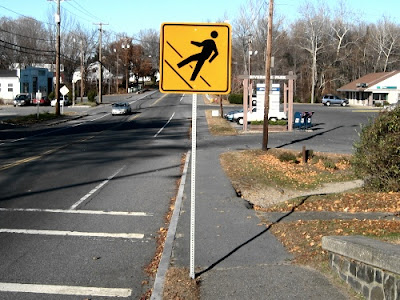 While I've eased into my mileage, I'm in the thick of training.  Nothing has been too daunting until this morning.  My plan called for six miles of hills...at 10K pace.  Double whammy.  While I shouldn't expect too much considering the above, a number of thoughts and let's call them "doubts" entered my mind.  My brain was trying to overcome my tired and untrained body and several sound bites passed through my head.

A SBM sticker for the reader that can name the movie from the last quote, but it's similar to the one above it.  I thought, this is only a six mile run and I'm in week four (or was it weak two) of my training plan, and this run is kicking my ass. #arghh

Granted, this wasn't perhaps my smartest move, by picking the route I did, but travel plans in the afternoon meant running something close to home for the early morning run.  Nothing is flat where I live, and I picked probably the second hilliest route I run.  No pain, no gain, right?  I completed the run with respectable numbers as I stuck to the 10K pace part with 456 feet of climb and an average overall pace of 7:37.  Deceiving time as I treated them as 1/2 and mile intervals.  As one of my run club coaches often told us, no one gets a medal for a training run.  No medal for me, but it certainly tested my mettle.

In my first marathon, I didn't know any better when I trained.  I was hurt, sore, tired, but didn't know what to compare it to.  That all seemed to get better with each marathon I trained for.  At least I knew what to expect and my body over time became accustomed to the rigors of being a marathon runner.

That all seemed to "go out the window" as I've felt as if neither my body nor my brain is prepared to take on Boston with all the above against me.  What I have learned is that running is a numbers game, and that if you put in the work, you should see improvement.  Also, for every ugly run you hate, there's usually one you love right around the corner.  Hoping my old bones can get me around that corner.
Email Post
Labels: #runchat BAA beginning marathon runner boston marathon boston marathon training