Two guys walk into a bar...or...a runner gets in a car with an Ethiopian...

This post starts off sounding like a cliche joke, but it's an odd chance encounter with another runner with a historic twist.  I occasionally use a town car "to and from" the airport, and got to know a really good independent driver named "Husen."  On my latest trip back into Denver, I got into a conversation about what we were both doing for the weekend and where my upcoming trips were taking me to.  Inevitably, the conversation turned to running and that I was training for the Boston Marathon.

Husen as it turns out is from Ethiopia and is a distance runner.  He didn't have to tell me about his home country's dominance in marathon running as it seems that Kenya and Ethiopia constantly vie for the world's best.  Having a captive audience for the 50 minute drive, I was quite enthralled with what he had to say, or perhaps hoping some Ethiopian run mojo would rub off on me. 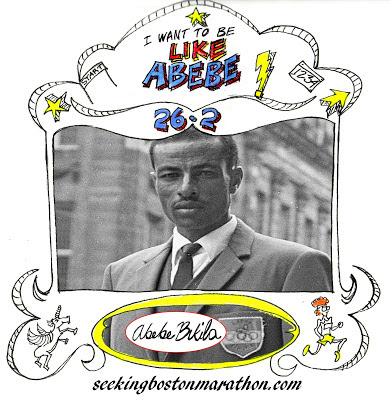 Husen grew up and trained in Ethiopia and neighboring Djibouti.  Husen no longer runs but plays soccer on Sunday nights.  I was perplexed by an Ethiopian that chose not to run...more on that later.  He explained that running is "THE" country's sports passion inspired by a runner named Abebe Bikila.  Abebe was a "late add" to the  Ethiopian Olympic team in the 1960 Rome Olympics--replacing another runner who had broke his ankle in a soccer match.

Adidas was the shoe sponsor at those Olympics and perhaps due to the late change, he couldn't find a pair that fit comfortably, so he ran barefoot.  While running barefoot, Abebe was looking for his main rival wearing number 26.  What he didn't know is that Wami Biratu (#26) had switched to number 185 right before the race and unbeknownst to Abede, he ran alongside Wami starting at the 20km mark while Abebe tried to catch a runner wearing number 26.  He never caught 26, but he outran number 185 (Wami) and won the Gold medal.  Abebe went on to win Gold again in Tokyo four years later.

In Ethiopia, kids didn't "want to be like Mike," they wanted to be like Abebe.  A national legend.

Back to my driver; Husen,was inspired by Abebe and took up the sport in his youth.  I was careful not to offend him with my questions, but was curious about several stereotypes.

SBM:  "Is it true that you ran everywhere...(which would explain some genetic or cultural advantage.?)"
H:  "Yes, "I would run home from school every day."
SBM: "How far was that in miles or kilometers?"
H:  "I don't know, not that far, but I ran every day."

He went on to clarify what was "not very far" and I was surprised to learn it was less than a 5K (3.2 miles.)  I was a bit disappointed thinking he had to run 10-20 miles to get wherever he had to go.  Not exactly the case.  Nevertheless, he described a culture where the youth ran everywhere vs. my neighborhood where the SUV's line up around the block to pick up the kids from school.  Due to the barefoot folklore of Abebe, many ran barefoot, but not everyone ran barefoot, including Husen.  Another stereotype broken.

SBM:  "What was your PR in a marathon?"
H:  "I didn't normally run marathons.  I ran shorter distances."
SBM:  "Did you run 20 kilometers?" (I was smart enough to know he probably spoke in kilometers, not miles.) "What's your half marathon PR?"
H: "I don't know.  We didn't normally time races, but would know who came in 1st, 2nd, and 3rd."

Husen went on to explain that his country was very similar in geography to Colorado.  For some reason, I thought it was flat, but it actually boasts a "fourteener" which also gives his country a training advantage (akin to training in Boulder, Colorado.)  The other advantage was year-round good running weather vs. the snow he's now used to driving around in Denver.

The conversation took a role reversal as Husen asked me about running and training in Colorado with sometimes brutal temperatures and running in  snow.  I explained that I sometimes "wimp out" and take it indoors, but otherwise have figured out how to dress in even the coldest weather and I know what to wear typically based on the projected temperatures (see Sore Nipple Calculator.)  It seemed a bit hard for him to fathom running in our recent cold weather (single digits the last few days.)

Husen was curious about how many days I would run a week and was surprised to hear me say 5-6.  I was surprised that he was surprised.  I was explaining running (in Colorado) to an Ethiopian. #irony  (Please read my disclaimer that I'm not a running coach, Dr., physical therapist, or the like.)  The only advice I gave Husen is that he should start running again as it's been years since he's run.  As we parted, he seemed excited to be talking about running and the notion of running again.  He promised to talk more about running the next time we meet.  Twist my arm...to talk about running.  I hope he starts it up again and I hope to hear more about Abebe.

Author's Footnote:  The most most obscure fact I turned up on Abebe was that footage of his Tokyo Olympic Gold medal run was featured in one of my favorite classic movies, Marathon Man (starring Dustin Hoffman in 1976.)  The vignette (similar to the one shown above of Abebe) was obscure in the film and of course I had no idea who the runner was or what race it was when I saw the film as a child.  I was not a runner when I first saw the film and it would be thirty years later before I'd run my first marathon.

And this...many a broadcaster and journalist ended their careers by insinuating that different races or cultures have some racial or genetic advantage.  It's ridiculous to ignore the fact that certain countries dominate the sport of marathon running and not wonder what it is they do differently that makes them so superior.  I'm not a racist...in fact my family tree looks like the United Nations with Black, Korean, Mexican, Native American, and a couple stubborn Germans in there.  If you think I've offended my sponsors, you're incorrect because I have none other than Chico's Bail Bonds.  If you are offended, comment away, or talk to my boss (me.)
Email Post
Labels: 1964 tokyo marathon abebe bikila ethiopian marathon runners