The lull before the storm.

I have been in a bit of a running (and thus writing slump) lately as I'm in the month before my official sixteen week Boston marathon training program kicks in.  It's fitting that my "Three Things Thursday" are completely random. 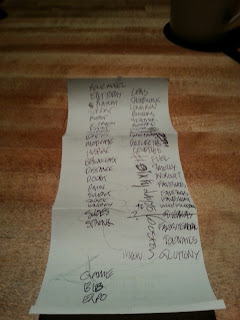 Are you running the Boston Marathon this April?  Are you a blogger, active tweeter, Instagramer, or Pinterest runner?  I want to hear from you!  I am working on a #photochallenge leading up to the race.  If you haven't heard of a #photochallenge, it's pretty simple.

A list of words or topics is posted usually over 30 days and your challenge is to try and post a fitting picture each day.  Plenty of time, but I want to round up some runners who can't stay off their Pinterest or Instagram accounts and get some ideas going.

It's tough but yet it's not to think of 30 words associated with marathon training and the Boston Marathon.  email me, tweet me, Facebook, or comment below.  Would love to have you join in #30DAYSTOBOSTON #photochallenge.

The kids went off to Grandma's last week for Thanksgiving so my wife and I were empty nesters for the holidays.  Not exactly a popular vote with the rest of my local family; my wife and I bolted for Vegas for the holidays.  I used to go to Vegas in my early twenties for the same holiday and had fond recollections of the anti-holiday.  No cooking combined with taking in some football where I placed a little "action" was a great alternative to the normal traditions.  We had a great four days staying at the Palazzo hotel and was able to upgrade to a decent  suite which included an eliptical machine in the room--booyah!


Over the course of the trip, I was able to fit in a 2000 yard swim in the heated outdoor pool (yes...an outdoor swim in November!,) my own personal eliptical, and an individual "Turkey Trot" 5K on the strip (the only other 5K I could find was miles out of town, so I opted for my own.  Running on the Vegas strip is a definite runner's bucket list item, but get out there early to avoid the crowds.  It's worth it just to see the odd looks you get from people already cracking open their Budweisers.  I got at least one "what the hell?!" look as I sprinted past Ballys.

The other highlight of the trip was taking in the Absinthe show at Caesars our last night there.  Think sleazy carnival comes to town combined with Cirque du Soleil.  It's not for the faint of heart as it's definitely adult material and there is nothing that's off limits.  Halfway through the show, the ringleader pointed out three audience members to participate on-stage.  He pointed towards me and said, "dorky white guy with the glasses, get up here."  Certainly, he couldn't have been talking about me.  I thought I shed that title in Jr. High.  The other two was a black guy (intentionally picked by the ringleader,) and wife of the "angry white Republican."  The two men were to (ahem) dance for the woman while seated (otherwise known as a lap dance.) 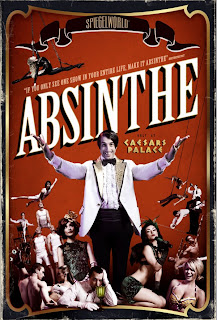 I only had two libations in my body and I was thinking, I am a couple beers short of being able to pull this off.  I realized that I either go "all in," or I will be even further embarrassed.  Should I lose my job in telecom (probable if they read this,) I apparently have a 2nd career to fall back on as I won the dance off.  Two things that will likely never happen again; me dancing in a Vegas show, and me beating out a black guy in a dance contest.  The later proving that white guys can dance.

So I guess I pulled off a quadathlon; run, swim, eliptical, and lap dance.  Not enough tea in China to post that video here.

Now that I've returned from Spiegelworld (Absinthe reference) it's time to get serious on the work that begins the second week of December.  I met with a good buddy of mine (Dustin) who is training with local Brad Hudson.  I most recently used the Run Less, Run Faster FIRST plan for the Colorado Marathon last May.  I have used Higdon in the past and my local running group.  Many swear by Pfitzinger which is at the opposite end of the continuum on mileage from the FIRST plan with up to 70 miles a week of training.  In other words, many options.  I am talking with Hudson and have a mere three weeks to decide what plan I will follow.  Tough choices to make in the next month.  Stay tuned on the plan I plan to use.  What do you swear by?
Email Post
Labels: brad hudson FIRST marathon training pfitzinger marathon plan run less run faster