Last Sunday was my first marathon in over a year.  My ninth marathon and my attempt to grab my fourth Boston Qualifier.  I have always wanted to run the Colorado Marathon since it's in Ft. Collins, Colorado which is where I attended Colorado State.  A reunion of sorts.  Much to write about as we made a family weekend out of it and my dad would finally get to see me run a marathon--my ninth, his first.  I had quite the entourage that included my dad, stepmom, wife, all three of my kids, sister, brother (their spouses,) and my niece.  A lot of people to either impress or hopefully not disappoint.

Blog warning.  There are running bathroom details that as a runner you've dealt with and understand.  To the general reader, I'll warn you (Potty Paragraph) so you can skip the section if it's TMI. 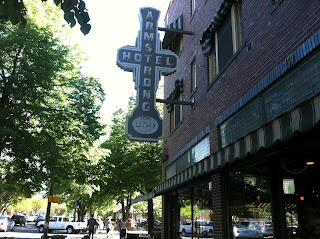 We decided to drive up to "Fort  Fun" on Friday and settle into the Armstrong Hotel in downtown on College Avenue.  An excellent choice as we needed six rooms in total and the Armstrong provided a boutique hotel environment with a blend of modern and traditional styles.  More importantly as a runner they had comfy beds, and it was walking distance to the buses and finish line.   The hotel sits above a "speakeasy" style jazz club, deli, and Mug's Coffee.  My kinda digs.

One of the many comic moments on Friday night was the waitress at the "Drunken Monkey" who'd overheard that I was running the marathon on Sunday and asked, "have you been training for it?"  Normally, my quick wit and smartass nature would have had some clever retort, but I'd never heard that one before.  "Yes, I have," I politely responded.  Thinking to myself..."just sixteen weeks and over 500 miles if you'd call that training."

Saturday morning, we loaded up the "Griswold wagon" and headed up Poudre Valley to scout the course.  The Colorado Mary is essentially all downhill as it mirrors the Poudre River winding back towards Ft. Collins. (Catch my video describing the course at the first aid station mark below.)

Saturday afternoon, the rest of the family clan started to roll into the city and we caught lunch at Avogadro's Number before heading to the expo.  Avo's was a regular weekend stop when I attended school so it was fun to share my frequent college hideaway with my family. 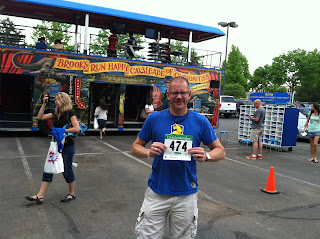 The Colorado Marathon is definitely a small town affair that sells out quickly with less than 2000 runners in the race.  Having run the Steamboat Marathon which is comparable in size, I knew to expect small crowds along the course and a smaller expo.  The expo was quite cool as Brooks had an old british double-decker bus peddling their kicks and giving some swag away.  I was surprised to find jackets and I "caved" and added another cool running jacket to the run wardrobe.

The bonus at the expo was a DailyMile  and twitter meetup with some runners I've met (Jon,) and others I felt like I knew well from the virtually run relationships online (Ellen and Lara.) 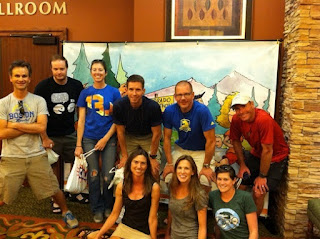 Post expo, I started to get into my race eve "zone."  I'd joked with my family members that were seeing me race for the very first time that apparently, I'm not much fun to be around as I start mentally preparing for the race in the morning.  Surprisingly, I was quite relaxed as we took in the traditional pasta dinner at Bisetti's a short walk away from the hotel.

The second comical question of the week came from my brother's wife over dinner.  "How often do you change out your tennis shoes?"  I giggled and said, that, "first off, we don't call them tennis shoes."  "Normally 500 miles or six months."  Laughter ensued and good times were had over good food.

Sleep on Saturday night was crap, but I'm kind of used to that.  Having to catch the bus at 4AM, I got up early to dress and get some food into my system.  Auto-pilot kicked in and I headed out into the morning darkness with a banana, bagel and oatmeal into my belly after my first bathroom stop at the hotel.  First grumblings of a not so happy tummy.

The bus ride was non-eventful as it weaved up the valley towards the point-to-point course start 26.2 miles outside of town.  It was still dark as I hit the porto-potty for the second time that morning.  Shit.  Not good.  Why today?  Telling myself, "happy thoughts, happy thoughts" as I tried to convince myself all was okay.  After peeing in the bushes a couple more times, the hour went by quickly. After sharing "good luck" with my local running club, the race was off. 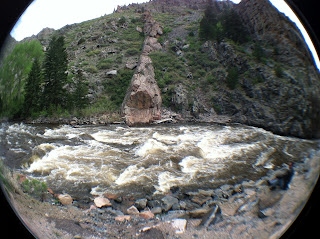 My plan was to set a PR on this fast course so I set out at a 7:30-7:35 pace and held to it consistently after the first four miles were a bit too fast which I'd expected.

As I approached mile ten, I had to pee again and figured I would jump into the green voting booth at the next aid station to take a quick pit (piss) stop.  BATHROOM WARNING (skip.)  The problem was I realized this was not a number one issue, but I needed a number two.  Even letting out some air I could tell would have let out more than air.  Shit.  What do I do here.  I can't get in and out of a bathroom in any less than 5-10 minutes without reading my wife's US magazine or tuning into my SeekingBostonMarathon Facebook feed at home (don't mock me, I know you do that too.)  My bowels were grumbling and my mind was racing.  This not only would jeopardize a PR, but my secondary goal of notching my fourth Boston qualifier.  If I sat down, PR and BQ would be out the door, so I was out the door.  Butt cheeks clenched.

BATHROOM Language over (Resume Reading.)  Glancing at the GarminConnect splits after the race showed the bathroom spike accounted for a minute lost on my race.  My pace seemed to slow after mile 14.  As I approached mile 17, Ted's Place was on the horizon along with the first crowds for the race.  Parking was sparse around Ted's and I'd told the ten family fans that they didn't need to get up early and meet me at 17...they could be there at the end of the race.  As I neared the crowd, I was hoping they didn't listen as I needed to see some friendly and supportive faces.  They didn't disappoint and it literally gave me a boost as I headed up the hilly section of the course with their cheers.

My running buddy Steve quiped on Facebook after the race that it's impossible to do math after mile 23.  I'd say my math started to dwindle around mile 20.  While I felt my body was strong going into the race with the FIRST training plan, I was hitting the proverbial wall.  I tried to do the math in my head for what it would take to salvage a BQ.  Eight minute miles would certainly do it...what if I dropped to nine..what's two plus two?  I didn't know.

At mile 20, I was still at a sub eight minute pace.  My stomach was in knots and my brain was more like Don Knotts. Coach Dave and his wife were at the Cache La Poudre Middle School snapping photos and I got the final dose of encouragement I needed.  He also told me to get on my toes.  Ironic since I'd been working on more of a mid/forefoot strike over this last training session.  With all the swimming, and crosstraining, I needed my strong legs to take over for my depleted system and the tip seemed to help.

My mind was racing with all kinds of imagery akin to the start of HBO's True Blood.  I had what I considered an "off year" by qualifying for the 2012 Boston Marathon, but not running it.  A tough year emotionally.  I had ten people waiting for me at the finish line.  They were expecting me to qualify again, and I didn't want to face them if the clock had spun past 3:30 which was my BQ qualifying time .  Legs and stomach burning.  I slipped to a nine minute pace around mile 24 then told myself that I have merely a two mile run left to qualify.  Mind over body kicked in and I picked up the pace again.

As I rounded the corner and saw that beautiful finish line, I threw in my final kick and passed some old dude who I'd been cloaking for the last mile.  I wanted to finish strong and make my Dad proud.  My emotions as I crossed the finish line overcame me as I slumped to my knees.  I cried.  Perhaps I'd exorcised some demons including the elusive unicorn.

I skipped the beer tent (a first time for me after a marathon) and finally took care of my bathroom business back at the Armstrong along with a bath.  I had to force lunch down as my stomach was in revolt, but my mind told my gut that it won out.  Take that!

This one was perhaps my most rewarding performance to date.  I missed my PR by seven minutes and thirty nine seconds, but more importantly, I was 58 seconds under the newer (and tougher) qualifying times for the 2013 Boston Marathon.  BQ number four at marathon number nine.  Musical numbers to my ears...I'm back in the club.
Email Post
Labels: #runchat #runnerds boston marathon Brooks running shoe colorado marathon FIRST marathon training qualifying boston marathon