Memorial Weekend Mishaps: The Minnow Would be Lost

I would say that I'm in "way over my head," but that's probably not the analogy that a beginning triathlete wants to use when one of the three events is in my next race is in open water.  With the Denver Triathlon two weeks away and no travel over the Memorial weekend, I had plans to hit all three disciplines hard.  As a runner, I'm least worried about the third leg of my tri--running a 5K.  Been there, run that.

Saturday, was my first day back with my regular running group and the last run of their Spring session.  More of a social run, I planned to run eight which was "no problemo" even after a marathon and pacing a half within the last three weeks.  I ran a brisk but comfortable 7:51 pace in Denver's Cherry Creek area.  With an early start and some humidity and cloud cover, it was a great sweaty run.

The rest of the afternoon, I spent time test driving a triathlon bike at the local bike shop.  Winds were gusting in the heat of the afternoon at 25 mph and literally blowing in forest fire smoke from New Mexico.  I was dehydrated from the run earlier in the day.  Not exactly the blissful experience I was looking for.  The price was too high, and they didn't have my size in the model I was interested in.  They could order one in, but it wouldn't be in until after my race.  No way I was going to use my brother in-law's 20 year old road bike again.  I'd try again tomorrow on Sunday to find my cycling "soul mate." #epicfail

The next objective of the weekend was getting in an open water swim.  Gulp.  For this leg of the triathlon weekend, I'd received an email from local Runner's Roost that they would be demo'ing wetsuits out at Grant Ranch on Sunday along with Mile High MultiSport.  The Denver Triathlon swim is at Sloan's Lake in Denver's City Park.  Unsure about the water temps on race day at Sloan's, I figured I'd better be prepared to do the wetsuit. In my first ever triathlon last year, (the BEC TRI,) I chose an open water swim and it would be the first time I'd wear a wetsuit.  Not smart. 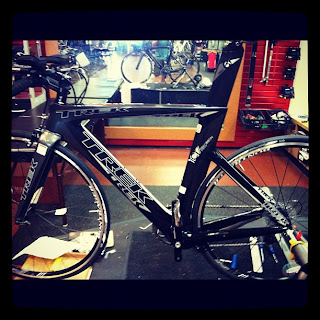 In marathon training, you never try something new on race day and I figure there's a lot more that can go wrong in a triathlon--as in three times as many things can go wrong.  The weather for my "three hour tour" for the swim was absolutely fantastic--sunny skies and no wind.  After checking in, I saw a lot of people that looked like they knew what they were doing.  The 14 year-old kid that checked us in looked like he knew more than I did.  "Act casual...pretend like you belong here," I was telling myself.

I met up with Matt from Runner's Roost and he sized me up for a wetsuit, but had already given out my size so I started to stretch on the next smaller size in the Blue Seventy suits.  Talk about "tight pants."  At least I'd be popular with the ladies...until I got into the cold water.  I stared out at the buoys and according to the map, a full loop would be a one mile swim.  Shit...that looks more like two miles.  I'd done that umpteen times before but it was in the safe confines of my heated local pool.  After stalling for a bit, I started out towards the first buoy.  Similar to last year's BEC Tri, I was having my Gus Grissom moment...not a full on panic, but my heart was racing, and I felt a bit nauseous.  #WTF 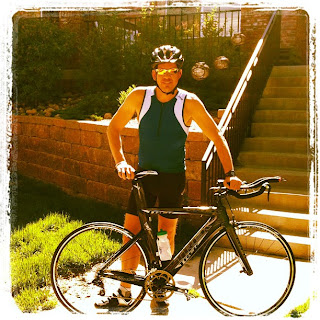 "Settle down" I told myself as I started to rely on muscle memory and get into a groove on my stroke.  Things settled down.  Second issue was there was no blue line below me to guide my path.  This was some murky water and there were no swim lane rope buoys either.  Over the course of the mile, I probably swam 1.2 miles at least as I continued to veer off course and redirect to the buoy waypoint.  I felt like a drunk sailor with one leg as I was swimming in an oval pattern--not a straight line.  No.  These aren't Yasso 800's at the local track.  "You need to swim towards that giant orange thing bobbing in the water," I mentally told myself.  I finished with much smoother strokes and breathing, and didn't have an issue with the distance.  That day's course was twice that of the route I'll swim on race day (1/2 mile.)  If I was the Skipper, this minnow would be lost.  More like Gilligan...not as smart as the Professor.

On Sunday I was determined to get a true triathlon bike.  No more 20 yr-old clunker with pedals with their fashionable straps.  I can't believe I podium'ed last year on that thing.  Another local bike shop, Bicycle Village, had a huge sale so I headed there.  I looked and looked, test drove, then looked some more.  I finally found my bike with a killer deal on the price as it was a 2011 model.  Wrong size.  Look some more.  I finally found the sizing pro (Scott) who was kind enough to get me in the right size in the right bike.  This guy knew his stuff.  I did not.  Intimidating.

After almost leaving a couple of times, I was determined to NOT leave empty handed, but also not to leave with the wrong fit.  I finally test drove a Trek Speed Concept 7.0.  This one felt just right.  I sheepishly confessed to Scott that I'd never rode on clips before.  It felt like I was telling the guys in my fraternity that I'd never been with a girl before.  I was a bike clip virgin. Intimidating.  I mumbled to Scott that I'd just use a pair of flat pedals for my race as it was only two weeks away and there's no way, I could learn by then.  "You'll look like a dork with a $3,000 bike and flat pedals."  Too late for that...I didn't tell him I'd already bought a pair with of alloy flats with straps on sale for $29.99.  I would later return them when he wasn't looking.

While they were tuning my bike, I went across the street to REI and bought my first pair of shoes and toe clips as the sale had wiped out Bicycle Village.  Similar (I don't know what the hell I'm doing) experience, but I felt more comfortable dealing with people that also sold camping gear. I walked out with some Shimano toe clips and Giro shoes with some guidance from an employee who was an Ironman triathlete himself.

Back at Bicycle Village, Scott (the fitter) did part one of the fitting for me.  After five hours, I finally owned a "real" bike, but I was late for the family BBQ.   Her maiden voyage would have to wait until Monday.

One of the tips I'd picked up when shopping and sharing my intimidation around toe clips was to practice clipping and un-clipping in a doorway.  With support on both sides, you can't really do any damage.  I also watched a YouTube video which suggested practicing in a grassy area (kind of like when I taught my kids to ride bikes in the park on the grass.)

After the doorway practice, I spun around the neighborhood sidewalks a few times and figured I was ready for this.  I must say, this was probably the most fun I've had on a bike since I was a kid.  I understand why they call it the "Speed Concept."  My rusty 20 yr old bike sulked when I took off.  This thing was flipping fast.  I passed a couple cyclists and didn't topple over when I had to hit the intersection stoplights.  Within a half mile from home on a ten mile loop, I had a flat and had to come to an abrupt stop.  No time to clip out, I fell over.  No damage to me or the bike (thank God,) but slight damage to my ego as cars drove by as I struggled to gracefully get back on my feet.

As I checked the stats on my ride, I showed an 18.1 mph average pace with a fairly hilly route.  Given the 3-4 times I had to slow down to stop, I figured on a course with race adrenaline, my pace can only get faster.  The similar route a week before on the rust bucket really pushing it?  17 mph.  I think I'm gonna like this new one.  Three days...at least three mishaps, but one of my better Memorial weekends.
Email Post
Labels: beginning triathlete Denver triathlon trek trek speed concept trek speed concept 7.0 triathlete Triathlon