Very random "Three Things Thursday" thoughts one month into my marathon training plan and one week away from Valentine's Day.

Things that don't go together 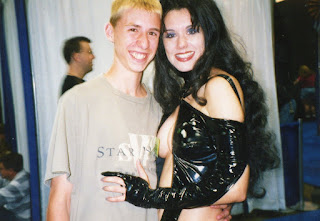 I'm into the fourth week of my marathon training plan and had quite a variety of ups and downs in my training.  After last Friday's blizzard and taking a poll, most voters told me to get my ass out there despite the 18" of snow.  I complied, but moved the Saturday run to Sunday which meant I could run (with my running group) on Denver's Cherry Creek trail.   The path was plowed but still had a variety of snow and ice patches to dodge.  17 miler done!
I followed the long run by my "best swim ever" on Monday.  I don't know what it was, but it felt effortless to knock out a smooth 1 x 2000 yd swim.  Schwing!  Those two complemented each other like polyester and pants.  Tuesday was interval track day.  Not really thinking this thing through, we had Italian Beef sandwiches for dinner Monday night.  Talk about a "gut grenade."  Not so smart.  After (ahem) preparing my system early Tuesday morning for a run, I hit the gym for 5 x 1000 intervals with 400 recoveries.  On the T.V. in the gym was none other than Bart Yasso talking about the Kauai Marathon.  Normally, I'd have a "Bart Boner" with a marathon on T.V., but the Italian beef, an aggressive 6:03 pace on the 1000's combined with images of runners laboring in a marathon really made me want to stop at four 1000's (or three) and promptly hurl.  I didn't want to disappoint Bart so I ran all five, but lowered the last one by two seconds.
I've decided that watching a marathon on T.V. is good to get you motivated to do a marathon, but it has a psychological factor that doubles the pain during intervals.  Add Italian Beef to the equation and you have a full-scale "assplosion" waiting to happen.  Italian beef the night before and running go together Star Wars geeks and dating.
Ice, Ice, Baby

I mentioned my Sunday long run along the Cherry Creek Trail.  Probably a whole blog story here when I run out of ideas to write about, but there really is a science around running on snow and ice.  Not just the equipment and clothing (see Cold Nipple Calculator,) but the constant monitoring of where your feet will land.  One of the best "diggers" I ever took was winter training in Colorado with a "tumble and roll" off a snowbank onto the pavement.  Since then, I've tried to become better at spotting the conditions as I see them by foot strike.  Black ice, smooth ice, powder, packed powder, and my favorite, "Captain Crunch" ice.  Cap'n Crunch ice is that crunchy stuff on top of pavement--safer than black or smooth, but not as good as packed powder.  All of it not good for running posture as you're not supposed to run looking down unless it's a trail run or you're scanning for ice. 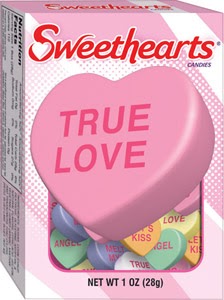 I love the holidays and Valentine's Day brings out the kid in me remembering back to grade school days of picking out your box of Valentine cards for the party at school.  There was always one or two in the box that were cooler than the other 30 in the box and those went to someone special.  Talk about a love message so subtle, they never knew the flimsy card had some extra special meaning.  My ineptness at an early age (and still into my adult age) with women is too vast to cover here--just ask my wife.  Another Valentine tradition as a kid was the conversation hearts from the New England Confection Company (NECCO.)  Same thing...you'd hand them out to someone special as if it was random, but you really went through the sayings to make sure you were sending the right message.  Each year, I look forward to buying a box or two for myself and more for my wife and kids.  I bought my first box this year and found they didn't taste quite right.  I figured I was "duped" and bought a copycat brand.  My wife bought me a six pack of what she thought was the genuine real deal conversation hearts and same thing.  "These things taste like crap!"  Being a crack journalist, I researched NECCO's site and discovered that "The new Sweethearts® have been re-formulated to be softer and more fun to eat."  They also added more flavors.  I was fine with the flavors they had.  I was okay when they added blue diamonds to "Lucky Charms," but more like you took something great and turned it into crap.  Who changes a 100 yr old recipe that people enjoy?  You don't see them trying to fix or modify the fucking candy corn at Halloween do you? Some marketing dude should be fired.  #disappointed

Did I really just write a running blog that included references to both Lucky Charms AND Captain Crunch?  Yes, but not by design.  Random three things Thursday...
Email Post
Labels: boston marathon running in colorado running in snow sweetheart candy