Pay me Now or Pay me Later

This blog is all about the hill run. Tough miles to prepare you for race day. Tough miles and even tougher to come up with a blog title. Some title names I considered;

"Hillacious Runs" Google wouldn't know what to do with this, my kids vetoed it, and it may be confused with my return from Mexico.
"The Hills are Alive" Too many "Sound of Music" references that have nothing to do with running. I 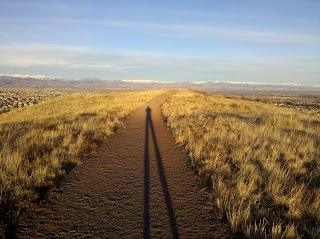 t did yield some amusing search results.
"Hill Yes!" Ummm...Hill no.
"The Hills" Too many Heidi and Spencer references that have nothing to do with running.
or speaking of Heidi, "Nasty Hills" didn't make the cut either.

None made sense, so I settled for "Pay me now or pay me later" since this seemed to epitomize what hill work is all about. Prior to starting my 18 week Boston Marathon training plan, I put effort into cross training and strength (weight training.) For those that follow my DailyMile training logs, you've seen me list "Meb Quads" during my cross training. No one seemed to get the reference, but have you seen Meb Keflezighi's quads?--holy thoroughbreed, he's got some pistons.

As I move into my marathon training program, putting in the hill pain during this phase builds those leg "pistons" so any semblance of a hill on race day seems less significant. I also find that with a healthy dose of hills, flatter runs seem to require much less 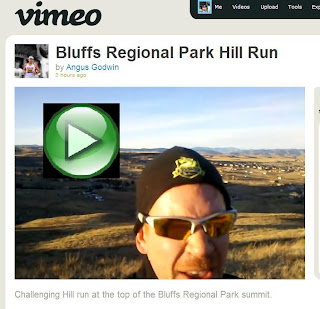 Other than merely logging miles for the sake of miles or "building a base," hill work is one of those things that improves yourself as a runner mentally and physically. Other tough workouts that fall in this category may also include speed (track) work and to a degree, tempo runs. Another way to describe these challenging workouts are "character builders."

I seem to have had a few of those lately with my New Year's Eve single digit temperature run, last weekend's long run in 21 mph winds (was I wearing a parachute or did it just feel like I was?) and my last few hill runs.

The first six to eight weeks of my training plan have included hill work on Tuesdays to build strength and endurance before moving to my speed phase. The speed phase implements tempo runs and track work on those days leading up to "taper." Some runners do "hill repeats" by running an incline over several intervals with recovery on the way down or in- 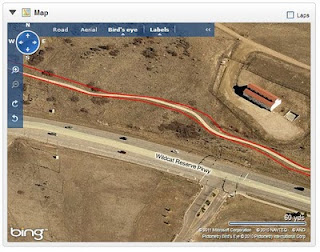 between. I prefer to map out a challenging hill route that essentially has the same objective over six to eight miles. Some Denver-area suggestions include Green Mountain with the infamous Jeep trail (the only long training run that ever forced me to walk,) and Loretta Heights. Two routes closer to my longitude are Wildcat Parkway and Bluffs Regional Park (Lone Tree Bluffs.)

I live in Highlands Ranch Colorado which is deceptively hilly. This route is convenient since I can start from my neighborhood and have a gradual climb up to mile one, it then picks up in miles two and three, teases you with a little downhill then up, then you return. Depending on how far I go, it's 800 to 1000 feet of climb (and descent.) The descent portion helps builds my confidence since Boston lulls you into overconfidence with the first 1/3 of the race virtually all downhill. Two weeks ago I attacked ten miles of this route with a tempo pace trying to take on the 1000 feet of incline at a 7:32 overall pace. This one felt real good as the best news was that my average heart rate was at 146 (hopefully the byproduct of eight months of heart rate based training.)

This one has a bit more character than Wildcat as it's a preserved natural park in the heart of Lone Tree, Colorado (southern suburb area of Denver.) Still not feeling 100% from a bug from last week, (and apparently not thinking 100%) I took on the Bluffs this mo 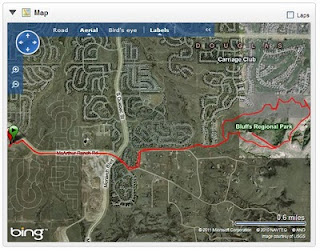 rning before work. The temps were in the 30's so I had to "bundle up" a bit with the wind thrown into the mix. I was surprised to find out that the elevation was only 800' on this "bad boy" but there's nothing gradual about the incline as shown in the video I took at the summit. I skipped the iPod on this one to enjoy Mother Nature and to keep alert from her critters; rattlesnakes, and coyotes are common in this area (the former more likely in the summer months.) It brings new meaning to the word, "challenging run."

It's funny how the mind plays games as you mentally check off runs, miles and weeks on the training calendar. At this point, I have one more week of hill training and will now begin the speed phase. Just as you have satisfaction getting through an individual tough run, I'm satisfied that this phase is over with and feel good about the work I've done the last six weeks to prepare me for the hills I will experience in Boston. Boston is known for many things including "Heartbreak Hill" and is a deceptively tough course. The course only starts at 490' and ends at sea level. The BAA throws 85' and another 100' in climb in the later Newton miles (mile 17 and 20) of the race. Without putting in my Wildcat and Bluffs work, I would definitely "pay later" without a healthy dose of hills in my diet.