Ahhh...that new shoe smell. Nothing is better except for maybe that new car smell, but cars come and go. Yesterday I posed a ridiculous challenge to the twitter world in the late afternoon as my work was done and my mind was wandering, "Work is tedious today. If I get ten retweets, I'll blow this joint & go buy some new #running shoes." I'm known for bizarre bets; shaving my head for my brother's birthday party, sitting in a bucket of keg ice water for $5, or losing $20 when Jimmy Johnson did NOT say, "how 'bout them Cowboys" in his celebration locker room after winning his first and only Super Bowl. 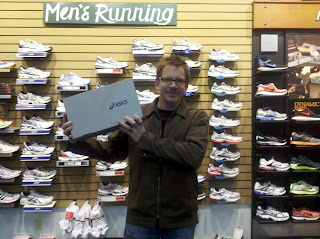 But this was a bet where I would win either way--it was about some new running shoes. Having strayed to other shoes with their new designs, bold colors or bold claims, I always go back to my old faithful, Gel Asics 2150's....but the new 2011 model is the redesigned 2160. Everyone has their benchmarks on how many miles to "put on the tires" but right or wrong, I have used roughly 600 miles or twice a year. I also try and buy a new pair a month before a race so I can run on something broken in, but not broken down. My DailyMile tally, excel spreadsheet and more importantly, my body was telling me I needed new shoes.

Somewhere after three tweets, I headed out the door for my favorite local running store, the Boulder Running Company. I know my electronic handshake with twitterland was ten tweets, but I could already smell the new shoes and more importantly, my feet, legs, hips and back were "aching" for new kicks.

Thanks to the eventually five that egg'ed me on to grab a pair; (@iRun2BeFit, @tyronem, @runnerteri, @Run_Caitlin_Run, and @ang_drw.) Okay, I confess...I actually headed out the door after the first retweet. Daddy's got a new pair of shoes!
Email Post
Labels: Asic 2160 Asics boston marathon qualifying for the Boston marathon running shoes