Who the Hell is Endo?

Who the Hell is Endo? (A Runner's Review of a Cycling Race)

Have you seen the movie where the comedic character and their sidekick are in pursuit and accidentally stumble into a(n awkward opposite situation) biker bar and immediately feel out of place? It's a shameless Hollywood ploy but used often and often over-used. Such was the case last week as one of my running buddies and I saw that the premier for "Race Across the Sky" which was debuting in Denver at the Paramount theatre. Facebook duped me further by trolling my posts, seeing that I'm a marathon runner junkie, and posted ads that touted the 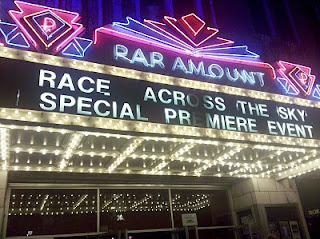 film as an ultra marathon film. A panel discussion prior to and after the film was all it took and we shelled out our $25 per ticket to get our running adrenaline rush.

The following morning, I began to realize that this was a cyclist/mountain biking film. Crap...I'm a runner not a biker. I own a bike which sometimes substitutes as my "cross training' fix, but the serious cyclist (or do they like to be called bikers?) looks at my bent rim and realizes I'm a "pretenda not a playa." I don't even know the lingo.

My buddy (Jim) and I decide to "man up" and stick with the plan figuring, there may be some triathletes that might relate to our passion for running. Three things work to our advantage; guys night out, beer being served, and the Paramount is one cool joint to host a premier as one of the oldest landmark theatres in the Denver area.

I wasn't going to try and pass myself off as a biker dude and stood out with my "acid blue" Boston Marathon jacket. The lobby was packed with cycling enthusiasts who felt they were at the academy awards of their sport and we were trying to blend in. The lobby also sported some pretty expensive bikes on display along with other components of the sport (seats, gloves, and those fancy clip-on shoes.) No wonder I picked running as this sport looked EXPENSIVE. All I have to do is buy shoes, shorts, a singlet and some nipple lube and I'm good to go for less than $200. The bike they were raffling was $4,000.

I grabbed my beer and popcorn and started to listen to the panel's stories prior to the film starting. They seemed to have a lot of the same buzz words even though they were talking about a different sport. Included on the panel was Erik Weihenmayer who was the first blind person to reach the summit of Mt. Everest and first blind person to complete the grueling Race Across the Sky, Leadville Trail 100. With full vision this course would scare the crap out of you and Erik completed it legally blind as a tandem entry. I enjoyed his story of getting signed up at a party over a beer. The panel laughed when someone mentioned an "Endo" (not sure if I'm spelling that right.) Who the hell is Endo? Delayed reaction...I get it...an "end over"...a very bad thing for a cyclist. Not sure what other runners call the equivalent...I call them "diggers." A bad spill. I began to see we're more similar than dissimilar.

As the movie rolled, th 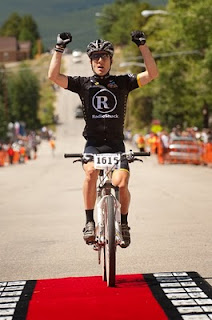 e narrator described the grueling course over some of the toughest badass mountains in North America. Many terms I could relate such as the "out and back" course meaning that you had to repeat the first ugly 50 miles a second time. Liberal (ten) HD cameras captured the stories, athletes and rugged scenery throughout including the 12,000' apex, brutal "power line" stretch and turnaround at mile 50. It was hard not to get "sucked in" as the documentary weaved in the personal stories along with the phenomenal Colorado scenery that draws in cyclists from around the world.

The personal stories included Erik, and Lance Armstrong talking the 2010 (eventual) winner, Levi Leipheimer into signing up for the race who told the panel after the movie that it was the toughest race he's competed in. A random camera deep into the race captured one of the participants sitting on the ground who responded to "how are you doing?" with a single "F bomb." A marathon runner does not want to walk at any point in a race, but this mountain beast had cyclists often "huffing and puffing" and pushing their bike up a steep incline portion of the course.

It's clear that the Leadville race has a lot of history and character as witnessed by the race coordinator who sports wiry long red hair and launches the race with his (literal) shotgun start. With Lance joining the fray and this year's second race documentary the race will continue to grow in popularity (you have to get in via lottery already) and hopefully maintain it's small mountain charm. I was inspired and even teared up with the personal stories of triumph over tragedy listening to the race tales. I'm not ready to convert to cycling (or is it biking?) but whether you are a runner, triathlete, runner or just looking for inspiration, this is a "two thumbs up" race film that will thrill, inspire and motivate you to run your marathon, ultra, or Leadville Trail 100.