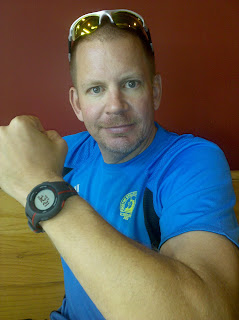 Just like the balloon pilot, when getting ready for a marathon or long run, the less ballast the better so wearing two watches didn’t seem very wise.

I have been polling twitterland and DailyMile peeps for advice on what’s the best combination GPS and heart rate monitor. I even spent time with the local Polar sales rep after a long run with my running club who had me close to breaking away from Garmin and the GPS world and going to a Polar foot pod.

I narrowed it down to the Garmin 405 and Garmin’s newest (and lightest) 110. While the 405 isn’t like wearing a laptop on your wrist (like my old 205,) it wasn’t quite as svelte as the new 110 and had “knocks” for departure from buttons and it’s flaky wireless connectivity. In addition to my electronic poll, I took at least two trips to the local running store (Boulder Running Company) to ask the experts. Considering the 110 was so new, I seemed to know as much as they did from my internet research, and knew more than the teenager who tried to read the box for me on my second trip (ahem…I coulda done that.)

The death of my 205 and an upcoming race (Georgetown to Idaho Springs Half Marathon) meant I had to act and went with the 110. With a month and over 100 miles on the new unit, here’s my conclusions;

1) They have trimmed out many of the 110’s predecessor’s features in terms of what you can view on the dial and what you can recall on the unit without going to GarminConnect. I knew this before buying and there is a fair amount of negative and mis-information about what Mr. 110 can and cannot do.
2) The top and bottom readings are not user settable. The top shows total mileage run (gotta have that,) and the bottom shows pace. Enter the controversy. The default setting calculates/estimat 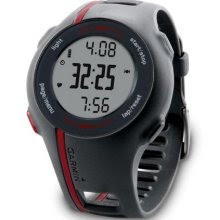 es what your pace will be over one mile. The variable that most of us care about is how fast am I running right now. That’s what this is supposed to provide. Critics say it isn’t a “snapshot” of how fast you’re running but that calculation of where you will finish the lap. A GPS merely calculates speed by measuring how fast it takes you to get between two waypoints, so if you want a more accurate “snapshot” setting, you can go into the lap settings and lower to a 1/4 mile which was good enough for me although for a more accurate snapshot, I’d prefer if it could go down to 1/8 mile.
3) The main setting in the center of the dial toggles between heart rate (HR,) elapsed time, and clock via the page/menu button. During training, I have typically had it set in the HR mode.
4) Synching with the satellites. This is the biggest improvement I’ve seen in that once you turn the unit on, you’re locked in a matter of seconds. In the past with my 205, (especially if I’d traveled to another State) it could take minutes to find where I was at and found myself awkwardly tilting my Garmin arm towards where I thought the satellite was—kind of like trying to adjust an old television antenna.
5) Lap button. As mentioned above, you can set the autolap feature from a mile in ¼ mile increments down to .25 miles. You can also have it off and manually hit your lap buttons between intervals. You’d typically use this with speed or track work and it works like a charm. One of the other “knocks” is that you can’t view lap detail on the watch itself. You have to upload to GarminConnect. 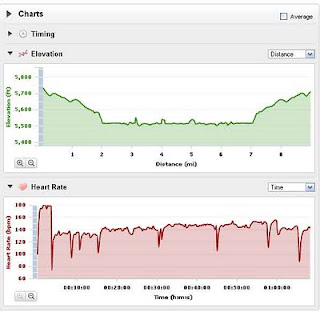 Not a big deal for me as I can wait to see the detail on the PC.
6) Uploading Data. While I’d signed up for GarminConnect (GC) before, I never used it with my 205. I used the PC version, “Training Center.” The older 205 uses a mini-USB port to upload data while the 110 has a funky clip that cloaks onto four contacts on the back of the unit—kinda like a dog bite. It works, but it doesn’t stand up like it does in the brochure so you just have to be a bit gentle with it as it wants to tip over.
7) GarminConnect. Having used “Training Center” for three years and being a creature of habit, I was reticent to learn new software, but have to say I’m pleasantly surprised at how easy it is to use and how useful the data is. Before I’d have to somewhat manually correlate HR and pace, but GarminConnect does a great job of mapping out summary, timing, elevation, heart rate, map and laps. For those that bitch about the lack of detail you can pull right off the watch, there’s plenty here.
8) It’s a watch. While you would never wear a 205 for a watch, nor would the battery last, I’ve found myself wearing the 110 as a sports watch.
9) Heart rate strap. It’s similar to the Polar strap I’d been wearing before, but it’s a tad heavier. I have got used to it and even wore it in my last race (Georgetown Half.)
10) Cost? Considering the trimmed down features, you would expect it to be much cheaper than the $249 price tag (including HR strap,) but still $100 less than the 405.

Final verdict? If you understand what you’re getting and what you’re not, I’d have to give it four out of five medals and I've been happy with the purchase.