Weak (sic) One of Training

I’m now officially in the eighteen week Higdon Training program in preparation for the Sacramento California International Marathon in December. I slowly picked up mileage (post injury) over the last six weeks to have enough stamina, leg strength and core strength to endure 500 miles of marathon training.

My two most significant tests over the last couple of weeks have been working with a number of training groups and elite runners. Test number one was going out for my longest run in six months—a 10 mile 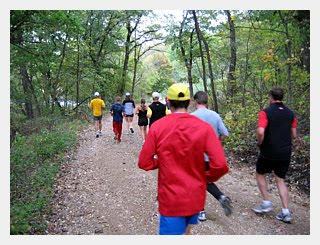 (long) run with Rocky Mountain Road Runners two weeks ago. The group met at REI in downtown and did an out and back around Sloan’s and Highlands Neighborhood. Despite the temptation to go out with the 3:30 and faster group, I went out with the 3:40 group and ran a fairly slow pace as many were a week away from the Georgetown to Idaho Springs ½ Marathon. It was a great morning with cool temperature. Around mile seven, I was feeling pretty good as I finished with a 8 minute mile pace—not what you’re supposed to do on a long run, but I wanted to see if my leg could handle it. It felt great!

Test number two was going out for a “bluffs” run near Daniel’s Park/Highlands Ranch with one of my running buddies; Tim Wolfe. Tim is a 3:00 runner and I questioned my sanity by a) running with him, and b) running the bluffs—this is basically the “Walter Payton running up the hill” training kinda stuff. Much tougher run, but managed to get through 9 miles.

I’ve still felt some minor discomfort in my lower left leg and followed up the previous two runs with a visit to “Dr. Death’s (Mark Plaatjes) ” partner, “The Queen of Pain (Heather)” last week for a dose of deep tissue massage. I’ve coupled those treatments with ice, some compression (McDavid’s leg wrap,) TENS electronic stimulation treatment at home

Ironic that my first official training week started on Sunday’s Sports section article on Olympic speed skater, Allison Baver. Allison suffered a nasty broken fibula in February in . After surgery and intense rehab, she resumes training four months later in June! A great story and great source of motivation to start my program. The other “carrot” was seeing a fellow runner don her ’08 Boston Marathon jacket at the Starbucks after the REI run—I want that jacket!