A Chip off the Old Block

UPDATE: The dude is fast for a 12 yr. old who hasn't quite sprouted the long runner legs yet. He ran a 8:07 pace in yesterday's meet at Castle Rock Middle School. 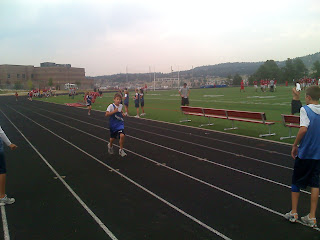 I talk about reaching running Nirvana (qualifying for Boston,) but I think I need to reset my definition. This afternoon I was able to catch my son's first ever Jr. High School Cross Country meet for Castle Rock Middle School (Castle Rock, CO.) I have never been a parent that pushed their kid into a sport or any activity that they didn't like. Jesse is a carefree 12 yr. old that has done everything from Soccer (not really his gig,) T-Ball (quite comical to see the scrum with nine boys "dogpiling" on an infield hit,) Basketball (his previous passion,) Flag Football (a previous highlight with his last game recording three touchdowns--one was called back for high-stepping,) and now cross country. Jesse comes from a three generation family of runners. He picked the


absolute hottest month of the summer to try his hand at running--with practices after school, the temps in Denver have been hovering 90+ degrees. He hasn't once complained (quite the feat considering he's also just entered into Jr. High and the increase in school pressures.)
This afternoon was his first ever cross country meet. The temps were again in the 90's. The course was a boring, hilly, hot, dry and windy course. Jesse finished with a 9:04 pace and got the gatorade and water treatment from Dad and Stepdad Mark.
I changed my mind...I think I have redefined running Nirvana. A father's pride.
Email Post
Labels: cross country kid running running