I Fell Into A Burning Ring of Fire

There is no shortage of perplexing symptoms when it comes to #longcovid. I can vividly (oxymoron given my brain fog) recall more than a few perplexing looks I got from doctors in the first two trimesters of my Long Covid journey--especially when talking about the early onset of what one would describe as "restless leg syndrome." My "crazy legs" are famous as featured on NBC's Today Show and with Lester Holt on NBC Nightly News.

My story is not unique as

1) Long Covid is still in it's infancy or research phase--in other words, little knowledge or consensus consists in the medical community with regards to helping patients like me but there's emerging clarity on the "groupings" of symptoms and at least some emerging theories.

2) Small Fiber Neuropathy has emerged as a common "umbrella" symptom of Long Covid. When I say "umbrella" I mean there are a number of "sub" diagnosis that can emerge; in my case; ME/CFS, Clinical Depression, pre-load insufficiency of the heart, and "Merry F'ing (look what you got for) Christmas" you now have small fiber polyneuropathy.

3) According to the National Library of Medicine, "Our findings suggest that symptoms of SFN may develop during or shortly after COVID-19. SFN (small fiber neuropathy) may underlie the paresthesias associated with long-haul post-COVID-19 symptoms." Short of another scientific study, my growing personal network of Covid long-haulers are "rife" with similar neurology symptoms.

When I say, perplexing looks, I'm not unique in that many doctors have their narrow area of expertise; lung, heart, internal medicine, and general medicine. In those cases, they would try to explain one symptom, but couldn't begin to explain the breadth of crazy shit happening in my body.
Early on in particular, I found Doctors would focus in on (as an example) my dyspnea (shortness of breath,) but would quickly change the topic or simply state, "that might explain the fever," or "that might explain why you can't breathe," but "I can't explain what's happening in your legs."
I've had more than my share of "wild goose chases" including a sleep study to see if I have sleep apnea. Seriously? Yet, I did the test.
Among the myriad of Long Covid symptoms, my "neuro issues" have lacked an explanation or diagnosis and have continued to morph over time. It started with the crazy legs and increase of burning feet. Since then, it has literally moved up the body to my now numbing fingers and chest spasms. On my first trip to Mayo Clinic, I met with one of their top neurologists and had a number of tests to try and explain what was happening. All results yielded no "smoking gun" including a small nerve biopsy. 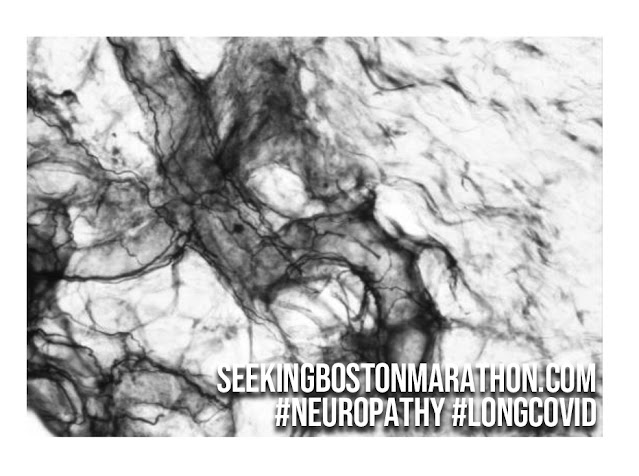 In fairness to Mayo, their initial tests were a year into my journey and as pointed out above, a lot has changed since then. As I started my medical odyssey with National Jewish Health in Denver, I "circled back" to my medical team there and Dr. Goldstein suggested revisiting my neuro issues with Dr. Wicklund with CU Anschutz who had been working with NJH on a number of similar Long Covid cases in their neurology department.
Dr. Wicklund re-ran a few tests including a brain MRI, ECG, another EMG and another biopsy. This time around, my tests were positive (or the opposite of what the orange false prophet once said, "I tested positively toward negative.")
My lab report stated, "Abnormal nerve fiber density at all sites. Biopsies in left foot, calf, and upper thigh revealed nerve fiber density is significantly decreased." So, I got that going for me...which is nice.
Since my first pilgrimage to Mayo, more consensus and clarity has emerged around my neuro symptoms including the chest spasms. This is a good time to point out, Im not a Dr and don't seek advise or treatment from these pages. It's been explained to me that there are small fibers (everywhere in the body and) in the chest that can begin to explain the (pun-intended) chest spasms that shake the bed just shy of a Regan MacNeil slumber party--just ask my massage therapist or my wife. (you'll have to Google the Regan reference.)
One of my online #longcovid (and #FBLC--follow back Long Covid) peeps, John Kennedy (no, not the Q reincarnated version) posed the question today on Twitter, "What's the "oddest" symptom (in his case, "warming" of  private parts, or as he called it, "warm willy." I replied with a few of my own and said, "I'm more worried about Dead Willy."
Not far from the truth. One of the many ways I've described what's going on in my body is "organs cooking inside my chest," and something in my bloodstream as many days my skin and body simply rage. This week has had a few of my worst days yet, but I'm trying to hang onto hope. At least with some identification of issues "under the umbrella," we can perhaps start looking at viable treatment.
Minor issue is the next appointments available at Mayo and with Dr. Wicklund are in April and June. I guess that's why they call it long-haul.