The Games Must Not go On

UPDATE: The world continues to evolve with more information. The Boston Marathon has moved to September. Liam's Dr. reinforced and strengthened the social boundaries. Given that, there's no way we would have put him at risk on Sunday given his weak immune system. While I am NOT infected, I've been sick for 63 days with something the doctors can't figure out and have more appointments next week. Be safe, don't hoard toilet paper and embrace the upside of social distance. I'm locked down at an undisclosed location with my wife for 48 hours. Namaste. 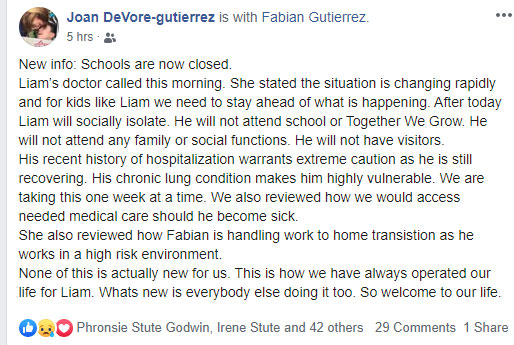 Today is common and uncommon for me. I work from home (when I'm not frequently on a plane) so that part of our new world is common to me. The uncommon part is that I was supposed to be on a plane today heading for a double-header; race number eleven (San Diego Leprechaun Run) and race number twelve (San Diego Half Marathon) with the "Amazing Mr. Liam"--my special needs racing buddy. All the events were scheduled around the Team Hoyt San Diego Annual Fundraising Dinner with Deena Kastor as guest speaker.

But alas, in the last couple of days, the first domino to drop was the NYRR NYC Half which was cancelled. The only thing Manhattan (who's slowly cordoning themselves off from the world) is missing is Kurt Russell with an eye patch as they have been hit HARD with this nasty thing. 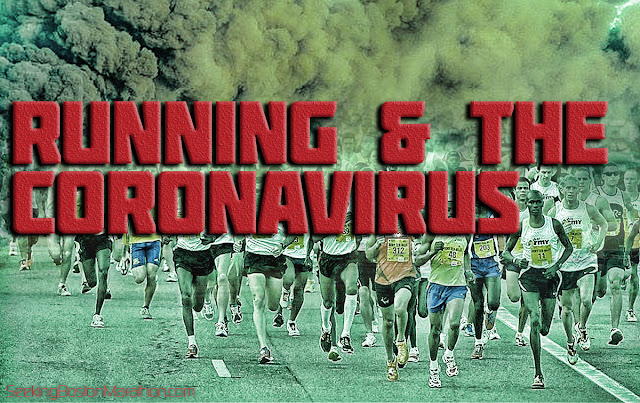 Since then, the NBA, March Madness, and Disneyland have closed. Never in my lifetime. The closest I can come to this is 9/11 which understandably changed everyone's lives forever. From the lens of a runner, races fall into the dangerous gathering category with large numbers, but also massive amounts of sweat. Even Forrest Gump has coronavirus. Not good, in fact very bad.

Given all that, it goes without saying, but I'll say it, these are all the right moves. A good friend of mine from my childhood neighborhood, Tom Costello, is a nightly correspondent on NBC News. and having been sick the last two months myself (not with any symptoms of Coronavirus,) he flat out said "I wouldn't get on plane." At the time of our conversation, I was still thinking I would get on a plane and race. I realize as I type this how ridiculous that sounds. The San Diego Half Marathon was cancelled this morning along with the Leprechaun race and the Hoyt Dinner.

Tom's full report last night on NBC is HERE. Tom had spent the day at John Hopkins Medicine and had probably the best information I've seen on Coronavirus. He posted the below on Facebook and gave me permission to share;

I spent the day at the Johns Hopkins Coronavirus Command Center in Baltimore.


And in recent days I've interviewed Dr. Fauci from NIH, Dr. Schuchat from the CDC, Dr. Kasterbauer at National Jewish, Dr. Singer at Northwestern and Dr. Schaffner from Vanderbilt.
These are the nation's top medical minds not prone to hyperbole. They are measured and careful in their analysis.
What they said is concerning and answered some of my questions:
IS THIS ALL AN OVER-REACTION? No, they insist.
-They are warning that in the U.S. we could see a death rate 10x that of the seasonal flu.
The CDC says AT LEAST 20,000 (maybe 40k) people have already died from the flu this season. You do the math - it's alarming.
-The older you are, the greater the risk, especially for the 65 and older crowd. Younger people/kids don't seem to be at great risk.
-Johns Hopkins Public Health Chief Dr. Eric Toner told me he expects 70-80% of us will get the virus. Most will have mild symptoms. But 10-20% of those will need to seek medical care.
-He warns that the nation's medical system will crash if it is suddenly inundated with people who need an ER or ICU. There aren't enough ICU beds, ventilators or protective clothing as it is. If doctors and nurses get sick, it could spiral quickly.
-Cities are canceling events and school so they can SLOW the spread of the disease, not stop it! That's critical!
The idea is to spread out the number of cases going to hospitals over time, so it doesn't happen all at once.
-There are no vaccines or anti-virals for the virus yet, which means hospitals would support patients with IV fluids, respirators, ibuprofen, etc.
-Also of concern, you may be exposed to the virus and have no symptoms for 5-12 days, yet be spreading the virus. That's why they are urging anyone 60 and older to stay inside as much as you can - no public events, limit exposure to others.
The risk is that the kids could come over to see the parents or grandparents and spread the disease without anyone knowing they were even sick.
This is not an attempt to scare anyone - but the language I heard today was far more alarming than what we've heard so far.
There's a reason for their concern.
Be Safe -
TC
Do with it what you will, but given the above and seeing one, then two NBA players get diagnosed with Coronavirus; the country and world are starting to do the right things. I won't play politics, but to say, our country was "asleep at the wheel" and we have catching up to do.

In terms of the run world, we deal with sweat--a lot of sweat and I'm a prolific sweater. Most of us like to run with others which puts us at risk given how it's transmitted (caveat; I AM NOT AN EXPERT.) I used to run in a large social run group in Denver, and can imagine they will have to think about group runs on a Saturday with close to 200 people. My blog's indirect namesake; the Boston Marathon is right around the corner and I'm guessing will be cancelled.

As of this writing, the games will go on, but my guess is it will not. It's not unprecedented; on a smaller scale, the NYC Marathon was cancelled the year of Hurricane Sandy, but that came and went; COVID-19 is here to stay and despite what our "stable genius" said, it will be here in April with a vengence.

Another aspect, I'm having to process is going to the gym. I belong to 24 Hour Fitness and they've been sending out updates, but I imagine their attendance will rapidly drop off as no one wants to share a machine right after someone sweated on it. I went last weekend and thought more than twice about how much I wiped down before and after, but I'm also a face sweat wiper; touch a treadmill, wipe your brow's sweat with the same hand? I don't think so.

In terms of lost training or lost expenses for race fees or more so for destination races, it's unfortunate, but it pales in comparison to the fact that people are DYING. Yes, I'm disappointed to not see Liam this weekend, but that kid is highly susceptible to infection and frankly, I'm more at ease knowing it was the right thing to do. I went for years without a cancelled race, missed NYC, but came back to race it the following year. These races are insignificant.

This too shall pass. Be smart, be safe. Keep running...

How are you managing your run world in light of the coronavirus?

As I blog less frequently, keep track of my race schedule and training with Liam on my twitter and Instagram.