Just as there was MySpace before Facebook, DailyMile was first and dominated (or seemed they did at the time) of combining run community with an online log of run, swim, bike, and walk activities.

Last week, a long-time run friend of mine, Brian Adkins (more on him later,) posted on Facebook that DailyMile was finally shutting down on March 20th, 2019. Out of nostalgia and curiosity, I decided to fire up the "flux capacitor" and log in one last time assuming my credentials worked. They did and indeed it was a wild, time-traveling look into my DailyMile past.

On my landing page, I was surprised to see people were still posting, but many had dropped out like I did in recent years. As I scrolled through some of my posts, I saw friends like Ellen from Colorado whose tiny profile photo I recognized of her high-kicking off a rock.

There were lots of friends I spotted who I've been run friends with for almost ten years including "SugarMagnolia," (Becca,) Vern, Sharla from Seattle, Carol (the nun from Boston,) Morey, Dani (from Weight Off My Shoulders) and The Runner Dad (Matt) whose invite was never accepted as I had already drifted away from the site. Many of them remain my friends on twitter and Facebook. 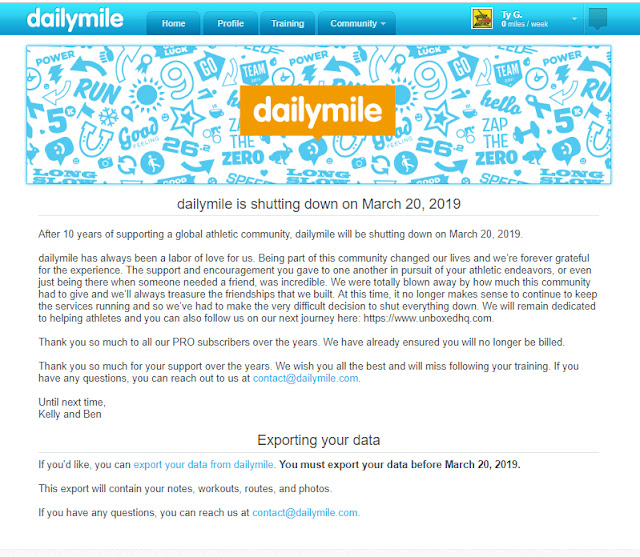 What was amazing about DailyMile was that it was all positive. Nothing like Facebook or Twitter today where despite trying to set boundaries, sewage leaks in (usually political) with hateful messaging on the later. When I started DailyMile, I was just starting out as a runner and just started this blog (SeekingBostonMarathon.com) which was all about qualifying for the most sought-after race in the land; the Boston Marathon.

When I say DailyMile was positive, you found nothing but encouragement with each workout or mile you posted. Many knew I was trying to get to Boston and many were genuinely happy when I got there. You got to know people; just as with other social media channels, you sometimes wound up meeting online friends in person. In the case of Richie Al Villagante, he met Agatha through DailyMile and eventually at the Energizer Night race in Cebu, Phillipines. They went on to get married.

Brian and I met at a DailyMile meetup at the Boston Marathon (my second) in 2011 along with Matt (the Luau,) Maddy McCarthy, Pete Larson (from RunBlogger,) Steve and Ally Spiers, SmartAssRunner from Ontario, and Doug the DJ.

On Brian's Facebook post, I saw many friends comment with reflection and sadness around the end of DailyMile and many updates and stories emerged like Richie Al meeting Agatha. I "clicked through" to many of the blogger sites and found famous run shoe review guy, Pete Larson had scaled back his blogging as he'd gone into teaching high school and focusing on family. He sported a little bit of gray on the chin just as I have. Luau chased another marathon and raised more money for good causes. 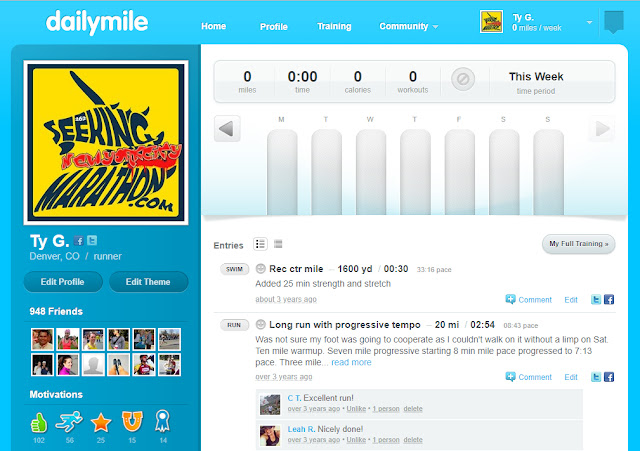 I've had a number of friends I've met in real life that I first met (like Brian) through DailyMile. After years of being friends online, I met Becca this last year at my first triathlon with my special needs buddy Liam in San Diego. It was as if we went to high school together even though we'd never met. She saw my triumphs and encouraged me through setbacks.

I finally met Ellen at the Slacker Half Marathon in Colorado. She was a Grad student at CSU and my daughter had just started there. Odd, that you can recognize someone from a photo smaller than a postage stamp. We smiled, hugged, and went onto a great race that day--for me, that wound up being my half marathon PR which qualified me for the New York City Marathon. My DailyMile friend Morey and I would sarcastically comment on each other's workouts with friendly competitive banter. We still haven't met but still claim we're faster than the other through other social media channels.

I won't get into the demise or reasons why DailyMile is going away. For me, one aspect was that other social media channels started to consume more time (mainly Twitter and Facebook) along with my blog. Running (and triathlons) take up plenty of time already and for me, it was just too much to try and post to too many places.

A more likely reality was the rise of other platforms such as Strava, GarminConnect, Nike's app, and for me at least TrainingPeaks. At the time, my running coach who trained me to my best race times would post my training schedule to TrainingPeaks. I'd subsequently post results including how I felt, energy-level, travel impact, etc. Again, it didn't make sense to post to TrainingPeaks (which synchronized to Garmin) and also in DailyMile.

As I mentioned, I was happy and surprised to find out my login credentials still worked. My profile icon was a modified Seeking Boston Marathon logo with street graffiti tagging "New York City" over "Boston." My previous entries talked about how I was dealing with a nagging foot injury. I realized that was the other reason I dropped out abruptly of DailyMile.

I'd qualified for the New York City Marathon, entered and was within a month of the race. After my last twenty miler, I knew the foot was wrong and found out I had a stress fracture. I was diagnosed with skin cancer at the same time. I dropped out of New York City that year and was in a major run funk. I had dealt with a lot of injuries and knowing I had a long layoff, I couldn't log into DailyMile watching everyone post runs and races when I was in a boot. I know, I know...shitty for me to drop out and not support others, but I know that was the final reason I dropped out. With an injury deferral, I went on to race New York City the following year which remains one of my favorite marathons despite my blog's name.

A few fun facts about my DailyMile. I don't know why, but I chose the profile name "Ty G." Brian still calls me "TyG" as if it was some cool musical artist name. The name still does not make sense, but then again my twitter handle is SeeksBoston26mi. That one is easier to explain as SeekingBostonMarathon was too many digits. My first run posted was in New York's Central Park on August 16, 2009 (5.73 miles.) On DailyMile I had 948 friends, 302 photos, and close to ten thousand miles posted with 102 "thumbs ups." Friends are talking about posting their last runs on the last day of DailyMile. Perhaps I'll add the next couple weeks to get to an even 10,000 miles on the site.

There were some great causes that permeated DailyMile. Joe Marruchella ran for his buddy Dom (Joe Runs for Dom) who succumbed to cancer. Matt Wilson (Run Luau Run) would die his hair blue showing support for autism and raise money for the Epilepsy Foundation as his daughter suffered from seizures. I posted about my first fund raise for the Leukemia and Lymphoma Society running with Team-in-Training for my first Boston Marathon.

In a sense, DailyMile was symbolic of the run community itself. Runners provide encouragement to other runners along the way regardless of their goals; stress relief, gaining fitness, escaping life or illnesses, going after Boston or that next PR. DailyMile would then congratulate or console the eventual outcomes. Huge thanks to Kelly and Ben for creating such a great community that I know helped me seek and eventually find the Boston Marathon.

To carry on the legacy of DailyMile, they're offering an export to Strava through March 20, 2019. There is also a "Memorial Group" of DailyMile alumni (personally, I prefer legacy to "Memorial.") You can find the group and join HERE.

Huge thanks to Kelly and Ben for creating such a great community that I know helped me seek and eventually find the Boston Marathon. When I reached out to them for comment, they (rightfully so) replied,

Hey Ty, Thanks for the support through the years. Unfortunately, we're somewhat long removed from dailymile and have been working on other projects for a few years now. It was a hard chapter to close and I'd prefer to keep it in the past, and look forward to the future. Best of luck with your blog!

Lastly, I looked at the original goals I'd posted on my profile along with a retrospective of how I performed against them;

Good day, and good night DailyMile. Thank you for helping me create amazing friendships and achieve goals I didn't think were possible.

Footnote: The export offers to include workouts, notes, routes and photos. I went through many of my photos online. Some were ones I had copies of, others were another glimpse into the "Delorean" past along with a few classic blog posts I shamelessly promoted. A number of them below;