First, let me apologize. Life has been busy with work, family, travel (including my first trip to Cape Town, South Africa) and taking time off after a grueling CIM in December. With that my pencil and writing has been dormant. A LOT has been going on, but I'll try to summarize some of the good stuff in my four things going on right now.


Drum roll please and onto the good stuff. I am THRILLED to have been selected for the second time (and second year in a row) to the Pro Compression Ambassador team. Early in my run blog career, I made some questionable decisions around who I'd write about or for. At this stage, you might say I'm "picky" only aligning with brands I'm passionate about.

Pro Compression is perhaps the best there is for a run ambassador program likely due to the borderline mania with their socks and being managed by run blog king, Pavement Runner; otherwise known as Pavey. They are organized, passionate, and I happen to love their compression socks.

Using that criteria, I am equally happy to have been selected by Nuun Nutrition for their 2019 team. For the same reasons I love PC, I love Nuun. I have "high hopes" for building similar blog ambassador relationships there and many of my PC friends also tout their nutrition. I'm partial to their Mango flavor!

I feel I won the "trifecta" as I applied and was accepted for a third ambassadorship with Simple Hydration. This is an example of truly believing in a product. I starting using their bottle back in 2014 and was (not) surprised to look back to my Twitter direct messages to the owners offering feedback on the bottle's lid. 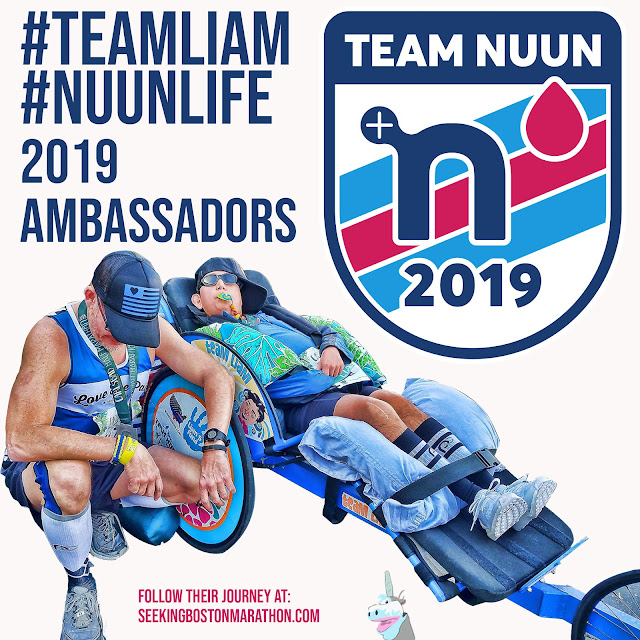 Not surprised, they have a newer version of the bottle out. Short version is I loathe the "army style" of water belts that leave your back and hips aching after a long run. Their design is simple (pun intended;) with a hook built into the bottle's shape; it fits into your back's waistband or run belt. Women will tuck into a sports bra or running top. I normally run with a couple variations of the Amphipod run belts to carry a phone or additional nutrition, and tuck it in there. You barely notice it's there and it's the only bottle I've ever used in a race of half marathon or greater.

I'm stoked to have (Liam) and I represent these great brands this year!


This is clear and fuzzy at the same time. I have always had run (and triathlon) goals with races that meet those goals. I've accomplished a lot with five Boston Marathons, many age-group podiums (and a handful of overalls when the fast guys slept in. ) I feel I've perhaps excelled even more as a triathlete. With Liam, we met, we raced, we became a triathlete duo together and stepped up to half marathons and our first full in December in Sacramento.

The "elephant in the room" is that after my body was "trashed" at CIM, I needed the time off physically and mentally to figure out what big goals could be accomplished this year. We talked (my family and Liam's parents) about "stepping up" to a Half Ironman. My mind is all in, but I'm not sure my body is yet. For now, that's on pause.

BUT (don't grammar shame me, I know you can't start a sentence with BUT)  I have two races I've very excited about in the first half of the year including the Carlsbad 5000. "Team Liam" has raised money for Rady's Hospital and brain research for 19 years through this race.

In April, we will race our third Carlsbad 5000 together and Liam will be represented in his 20th race. With Ironman initially buying out the Carlsbad5000, they lost much of the local involvement and passion. Meb Keflezighi is the new owner and race director so this one will be special.


Perhaps serendipity, but as my body has rebeled from age and joint issues, not ironically, Liam has entered my life and become my primary focus in racing. I mentioned our path many times here and above. A big part of that is Team Hoyt San Diego. I met Maggie Seymour (Run Free) and James
Pathman at my first race with Liam. Liam borrowed his buddy Cormac's blade and I met them both after the race.

Maggie wound up completing the "fund raise" for Liam to get his own blade. Jim graciously has welcomed me into the Team Hoyt San Diego family despite the fact that I live in Denver and have few precious opportunities to race with Liam.

The second "circle the calendar" race is in March at the San Diego Half Marathon. Dick Hoyt will be in town for a dinner and fund raise that weekend with Meb Keflezighi as the keynote speaker. and I will get to "properly" meet Dick who's the legend that started a revolution of inclusion of assisted athletes. I met Dick at my first Boston Marathon in 2010. I barely knew who he was, and little did I know how he'd impact my life ten years later. Tickets for the Hoyt dinner HERE.


With a bit of a forced sabbatical to let my body heal after CIM (perhaps combined with a bug that halted most activity for three weeks,) I looked at it as more time with my family and especially my wife. My wife is not a runner but has perhaps made more sacrifice than I have as my biggest fan.

Dumb luck would have it that Boston lands in the same month as our anniversary and her birthday. I suppose the analogy would be if I was a hunter and "Elk season" opened up at the same time. Sorry babe, I gotta go kill animals, but here's a bouquet of flowers. Yeah, um, no. There are plenty of miles and great races ahead; they just won't fill the calendar. 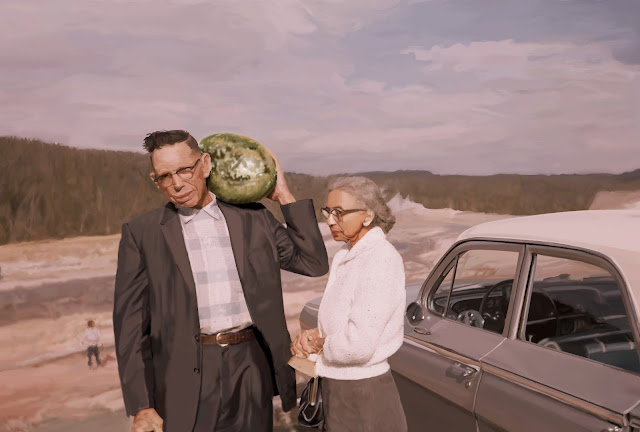 Part II of that balance is also being able to dedicate some time and balance to my "left brain." I've always enjoyed writing and illustrating posts. Yes, that farting runner GIF (post HERE) was created by the runner that inspired it (me.) My aforementioned bride bought me a Wacom digital tablet (she probably shares the same amount of regret as she did when she bought me Hal Higdon's marathon book as they both can become time-consuming obsessions.

With my holiday sabbatical and nights and weekends since then, I completed my first digital painting of my grandparents intended as a Christmas gift. I've always wanted to create something from my favorite photograph of them and perhaps 40-50 hours later, I've completed it. I also painted a (brush) photo of Frida Kahlo for my wife for Christmas.

Life balance is a good thing. Sorry for being off the grid, but there's been a lot going on. Now...we run, (swim and bike) and race while maintaining balance. Namaste...