Giving the Gift of a Marathon

Flashback to the month leading up to what I thought was my last marathon, the New York City Marathon in 2016. I had my last long run of twenty miles in Seattle and my knee went a little "wonky." I'd seen it all when it comes to run injury and as usual, I headed to the ortho to rule out anything serious and get the "green light" to run another one of my dream races, the New York City Marathon.

It wound up not being serious but it was not something that rehab or treatment could alter. My doctor recommended (again) switching sports as I had some bone-on-bone cartilage issues in my knee. Since 2016, I've adjusted my training to shorter runs and a mere two days a week. Not exactly the formula for marathons. I was resigned to the fact that I could still run, but marathons were likely in the rear-view mirror. 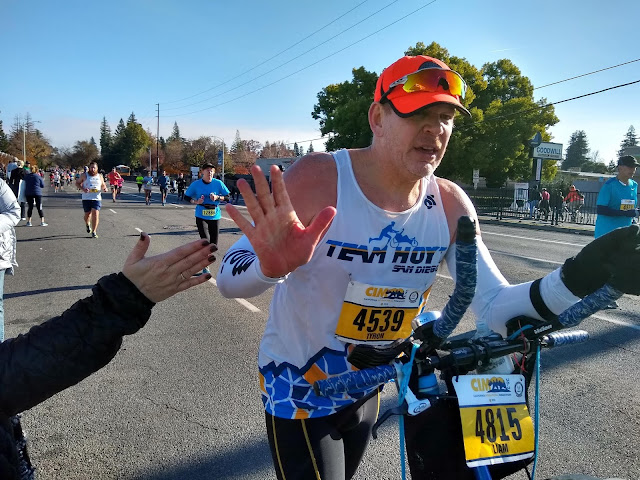 Since 2016, my special (in more ways than one) relationship with my I Run 4 Michael buddy Liam has become a larger part of my life and focus from my athletic standpoint. An online relationship turned into a surprise visit to his 18th birthday in San Diego. From there, we decided to run a 5k together. That's snowballed into racing together (now) eight times in two years.

Despite the fact that he's never walked due to his Hydrocephalus and Cerebral Palsy, I wanted to give Liam the same experiences of mine; he's become a half-marathoner and a triathlete. Like my progression in the sport, I didn't want to deny him the experience of also being a marathoner. Perhaps in denial, I decided that my body could certainly handle one more marathon.

I naively thought I wanted to qualify for the Boston Marathon in my first ever race in San Diego (it took me four attempts to finally qualify) at the Rock and Roll in 2009. I figured (in my mind only) that if I was going to train to do potentially one (or two) last marathons, I'd go for another BQ. 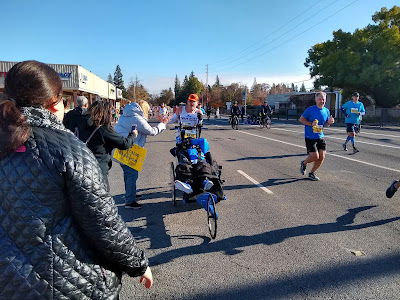 I used a Furman FIRST-type plan incorporating runs from my previous run coach of intervals and fast and faster tempos with some long runs at goal-paced progressive miles. For the most part, my training went quite well despite heavy travel with a new job. My last twenty mile run was amazing hitting sub eight minute miles. At that point, I felt a BQ was possible.

In a cruel twist, I "threw my back out" two weeks prior to the race. Putting a positive spin on it, I figured, better two days, than two weeks out from the race and when this normally happened it was just a two day setback. I couldn't walk without pain and standing up straight was a problem. Two days turned into ten days. That's a problem.

My training went to a halt and I spent more time with chiropractors, run physical therapists, massage therapists and heating pads than I did with running. Within two days of leaving for San Francisco for the California International Marathon I finally got some relief. Optimism returned as the revelry and enthusiasm met me in Sacramento with Liam, his parents (Joan and Fabian) and his extended family.

We stayed in an amazing hotel, The Citizen Hotel,  a few blocks from the State Capital. I was relaxed and ran my first (intentional) 2.6 miles on the San Mateo treadmill hotel three days before arriving in Sacramento to see if I could handle ten percent of a marathon. All green lights.

Joan had networked with Ainsley's Angels for coordination around the race start as this was an annual event for them. For the first time, I was in sole charge of Liam for the hour before a race. Pre-race preparation in Folsom requires a bit more thinking for things like, "how to hit the porto-potty" one last time with a kid in a wheelchair (running chair) who can't be left alone. We had access to an ADA tent that also played host to quite a number of blind athlete tandems. It was warm inside the tent but bitter cold outside, but the "blade' is quite long and doesn't exactly maneuver well in tight places. (SPECIAL THANKS to Rick and Sheryl Howell for making Team Hoyt San Diego feel welcome!) 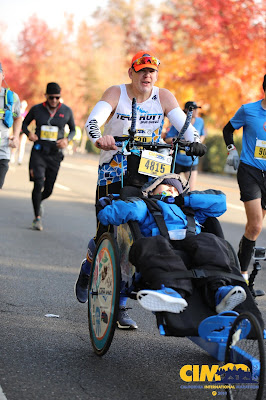 I was able to get some help watching Liam for a brief moment while I "hit the head" one last time before "gun time." With a fairly large field including elite runner, Stephanie Bruce, Liam and I were in the front row along with the other wheelchair and Ainsley's Angels duos.

My first BQ came in Sacramento and with my strong training, I was confident, but I figured out around mile four or five that a BQ was going to be tougher to hit than I thought. At the halfway point, I knew a BQ was not happening. Around mile 15, I had the typical thoughts you'd have around mile twenty of "why the hell am I doing this???"

My energy was not there at all and I can't explain it. Perhaps the light mileage played a factor or the two week hiatus. I just didn't have it. I talked to Liam and tried to draw on his spirit. My mind-over-body mind tricks had to take over much earlier than a typical marathon.

Perhaps the other factor I underestimated is that running downhill or on flat terrain is one thing, but the slightest uphill is exponentially more work handling a total of 330 pounds. As I learned years ago, five pounds is five minutes in a marathon. I went in perhaps heavier than any other race due to business travel and not paying more attention to diet. I was working out 5-6 days a week over four months, but not running 50+ miles didn't shed the weight as other marathons did. As I looked at other marathoners in my hotel, it played "mind games" with me (incorrectly thinking I'm fat or overweight.) This was crazy talk, but messed with my head. Given all that, the "rollers" were far more work than I expected and paid a toll as my goal of running 8:14 miles spiraled into nine and near the end ten minute miles. 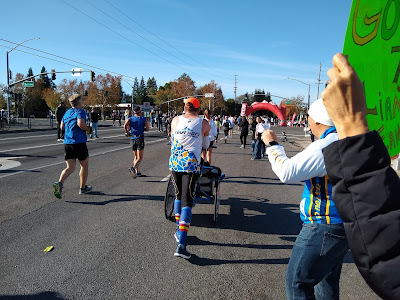 With the point-to-point race, I was able to see my wife and Liam's family several times. At the first time, my right knee was sore and wobbly again as it was leading up to New York City. The knee was strong throughout training, but it was unstable, sore, and threw my gait off. I remember mumbling something about it to my wife at the eight mile mark. Later I'd learn Liam's mom, Joan asked her after I passed if I would drop out of the race. "You'd have to drag him off the course" as I was not going to deny Liam.

As I hit the flats in the city, I still had "no engine" and remembered the opposite experience of my first-ever BQ there in 2009. This wasn't meant to be. My emotions got the best of me as I started to break down. As I rounded the two left turns that were familiar heading to the finish line, pride set in and I wanted to run fast to the finish. I was in full-on ugly crying mode. While I walked through most of the final mile markers and water stations, I wasn't going to walk over a marathon finish line.

Normally the thoughts of "never again" disappear in the bar right after a race. This time, I had to admit to Joan's mom, that this is likely "one-and-done" with us as a tandem. This is probably (understatement) my last marathon. The same proclamation I made after New York. Looking at the "glass half full," I've done two triathlons and two half marathons and they didn't take the toll on me that this race did and I plan to continue racing the "shorter stuff" with Liam.

Now with two weeks to reflect on our efforts, I'm proud of Liam and have a bit of self-pride in the gift and experience I was able to give him and his parents. If you've perhaps been a bit inspired by Liam, sign up to be a run buddy at I Run For Michael and give the gift of running. (IRun4 is an online buddy relationship that does not require running together.) Reach out to me on Twitter if you'd like to learn more about Team Hoyt or I Run For Michael.