Seven Days to My Seventh Race With Liam

This should have posted on Sunday, but who posts on Sundays and "Six Days to My Seventh Race" didn't sound so good. On Sunday in San Diego, I will race with my I Run For Michael buddy Liam in our second triathlon and our seventh race together. This will also be our (god willing) our first attempt at an Olympic distance triathlon. The longer swim does not scare me, but 28 miles hauling nearly 300 (combined) pounds will be a first and I'll be racing close to three hours which is not something I've done for a looong time. No problem. 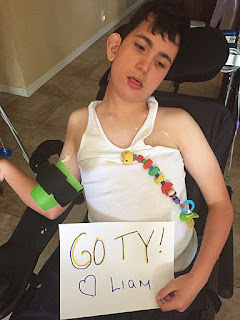 With that, my six special memories of Mr. Liam. Have to start with my first triathlon a year after my near-fatal crash in 2014. I put off my selection for my IRun4 buddy as I was still healing and riding a lot of pain pills. I returned to the scene of the crash to podium one year later and sent my first of many medals to Liam in San Diego.

The race recap HERE. I wrote the story for someone (like Liam) that is blind with extra descriptions on the senses I encountered.

"My race tires make more noise when I stop peddling. They are expensive, but sound like a cheap plastic toy gun when they spin without peddling. This year there would be no crash and my heart rate slowed down once I stopped my bike shortly after that fateful corner."

On Sunday, we race together!

Liam was born with Hydrocephalus and Cerebral Palsy. He is blind, has never walked, and due to severe scoliosis, he has a metal rod in his back and the use of only one lung. Liam and his whole family are "solid gold."