What is it with me and my left foot? I'm once again in a stylish knee-high walking boot. 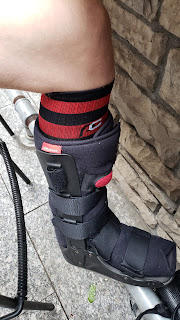 This would explain my conspicuous absence from these pages along with being temporarily out of work, then starting a new job which is NOT writing and tweeting and Instagram'ing about running all day.

First off, it's a short stint in the boot. A week to ten days. My foot had been bothering me in the same location as a fifth metatarsal stress fracture and a fracture fracture in the same spot in an ill-advised attempt at trail running a few years ago. NOT my forte. You might say I was in a bit of denial, but my race partner (and I) were jonesin' for our next race, but I have known for a few months the foot was not right. I feared the worst but got better than expected news from my normal ortho; Steadman Hawkins in Denver.

Sounds like something that requires penicillin. The peroneal tendons run on the outside of the ankle just behind the fibula (the leg bone is connected to the ham bone...)

With that, I do have good things to report. Wanting to race the same weekend as my buddy Liam in his third half marathon at the San Diego Rock n' Roll Half, I entered the Longmont triathlon in my second tri of the year last month. Both amazing successes as Liam's mom and dad completed their first half marathon with Liam AND was able to connect with the Pro Compression mermaids on the course (including twitter supastah Carlee McDot!) Pure awesome.

Not to be outdone, I grabbed first in my age group in my triathlon in Longmont on the same day. My swim was strong although it was a pool swim and there was some congestion and passing on the swim leg. I was (in theory) the fastest in my grouping of four but alas I don't have the flip turn perfected (AT ALL. #understatement.) I did however "catch ground" in transitions which were quite smooth and all the biking this spring paid off with hitting my goal of averaging over 20 mph in the bike leg. 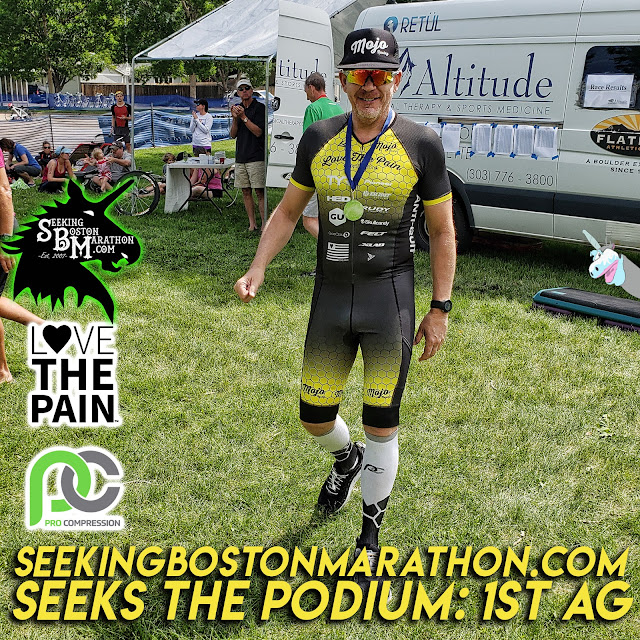 Only running two days a week did not help my run leg as it was quite a bit slower than I'd hoped only averaging an eight minute mile pace (quite a bit off even from my 5K times earlier this year pushing Liam in Carlsbad was a 22:30.)

I guess my point is I've been here before with injuries, and I have much to be thankful for especially related to my run buddy Liam. For now, the focus is healing and what races we might still be able to tackle together this year...there's talk of a marathon?!?