How to Register an Assisted Athlete?

I've asked this poll question on some of my social media channels (Facebook, Twitter, and Instagram,) but I still have questions and confusion in my clouded old brain. For those that have followed me (Thank you!) you know about my very SPECIAL needs athlete Liam. Yes, that running addiction has no boundaries as Liam is hooked on racing and his mom is all over me to fill the race calendar (and I love it!)

The question is how do you register someone in a Team Hoyt running chair? The major races have a wheelchair division that's highly competitive which "takes off" before even the elites as they're propelling themselves in (I'd guess) very expensive rigs using (total respect) pure upper body strength. Tatyana McFadden has absolutely dominated this space (HUGE respect.)

I have now raced a mere three times with my I Run 4 Michael run buddy Liam. Liam has hydrocephalus, cerebral palsy, and scoliosis. He's had over 150 brain surgeries, is blind and has never walked but he kicked ass in his first half marathon in Denver at the Rock n' Roll Half.

His parents (who are absolute gems) went about registering Liam for the race and clicked on "Wheelchair Division." I also registered myself having got mixed feedback on "do you register yourself, or just the special needs athlete?" I figured it would be special and wanted my own shirt, bib, and medal. As we lined up in Corral one as the sun was just coming up on a very brisk morning, one of the race organizers (with headset and clipboard) motioned me to duck under the corral one ribbon and take off before the elites. She jotted down both our bib numbers to her clipboard (more on that later.)

In the early group, there was one gentleman in a wheelchair and a few others who were in wheelchair or strollers being pushed by another runner (one woman had an entourage.) As an aside, I must admit, this was a blast literally being the first one out of the chute. For the first few blocks, it was just me, Liam, and the lead police and bicycles.

This last weekend, I was ecstatic to see that Liam got a championship trophy in the mail from Competitor Group and Rock n' Roll Marathon team. Mom was moved to tears and posted for the world to see her son was a champion. Three days later, (in error) I also received a championship (very nice) trophy for second place in the wheelchair division not (surprisingly) a second behind Liam. I'm working with RnR to get the trophy to the rightful owner. 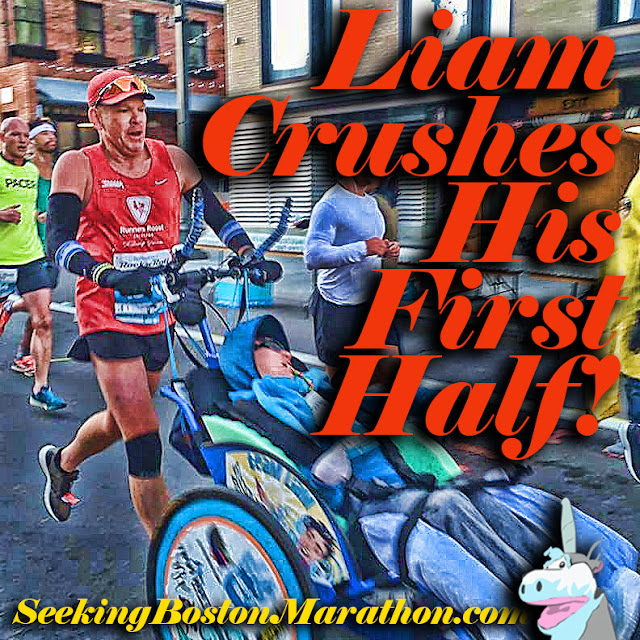 After the race, my competitive nature "kicked in" and ask Liam's Dad to check the results board to see if we did indeed podium. We got a confusing "no" and the reality was there was no time for the beer tent or post-race activities as Liam was completely wiped out and needed a diaper change and nap. Getting the trophy was amazing, but yet confused me. My trophy added to the confusion.

I guess I lied, I have more than one question;

1) How to register a Team Hoyt blade athlete? As an age group athlete, or wheelchair division?
2) Within the wheelchair division, I am an average runner pushing a very special kid, but a Team Hoyt blade is a much different animal than a wheelchair athlete. Should there be an assisted athlete category?
3) For small races, it's more likely "anything goes," and much of the advice suggests notifying the race director which makes sense, but what about major races? Other Rock n' Roll races or one of the Abbott World Majors? Same question...sign up Liam based on age or Wheelchair division?
4) Do I register? Small race, maybe, maybe not. Big race? Same or do we both register?
5) If we move up to the notion of a half Ironman this year, again, do I register Liam or register myself or both? 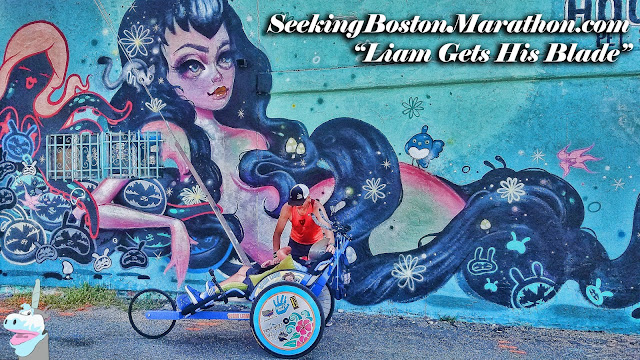 I would LOVE for those more experienced with assisted athletes, Ainsley's Angels, or Team Hoyt chapters to share their wisdom here. Please don't get me wrong here either, the mere fact that he's racing is rewarding beyond words, but as I shared with Joan (Liam's mom,) before his first race (Carlsbad 5000,) I didn't want to jog (not in my vocabulary,) but give Liam the adrenaline of RACING with the wind in his face. Exhibit A is the two GoPro videos of both Carlsbad and the Denver Rock n' Roll Half Marathon, he got a giant Cheshire Cat smile in both. He LOVES racing and just like most of those who read these pages, he's hooked. I also think there should be equal opportunity for Liam (and kids like him) to compete...question is how the heck do you register?

Thanks in advance for chiming in!