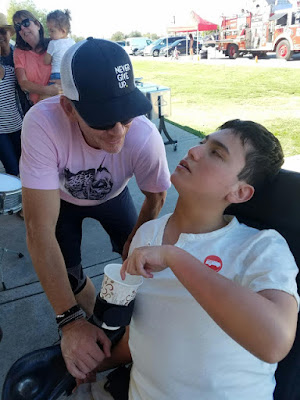 When I qualifed for my first Boston Marathon, I was outside the qualification calendar (as I qualified in December '09 at the California International Marathon/CIM in Sacramento.) I did not want to wait sixteen months to race the race of my dreams. I decided to enter the 2010 Boston Marathon with a charity bib with Team in Training and the Leukemia and Lymphoma Society and raised money in honor of a high school friend's daughter who lost her battle with the deadly disease. That wound up dwarfing the marathon experience itself as raising money for such a valuable cause was more rewarding than the race.

Right after my (near deadly) triathlon accident in 2014, and perhaps being reflective, I decided to give back to the sport again. I decided to adopt a running buddy through I Run 4 Michael. IRun4 is a non-profit that matches up runners with individuals with typically severe physical limitations that prohibit participants from enjoying the elation of a run in the park or crossing a finish line in a race. I lucked out by getting matched with Liam. Liam was born with hydrocephalus which is "water on the brain." Liam has had over 124 surgeries on the brain which has him highly susceptible to infection. He's blind and confined to a wheelchair. 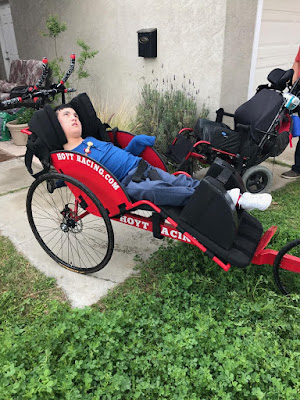 I was fortunate to fly to San Diego in October last year and surprise him and his mom at his 18th birthday party (story HERE.) It's hard to say who gets more out of this; Liam, his family, or me. I can honestly say, this has been one of the most rewarding things I've done; running or life in general. I've got to know Liam (he loves the water, popcorn, and movies. He's also known to flirt with the ladies.)

Liam's mom Joan invited me last year to the Carlsbad 5000 as part of "Team Liam." They are the longest (in existence) running team associated with the Carlsbad 5000. Due to other commitments, I was unable to attend. I'm happy to announce (bad knee and all,) that I will not only race this next month, but I'll be assisting Liam in his first run race in a "Team Hoyt" race stroller.

I'm nervous as I've never done this before.

I'm nervous that he'll be healthy enough to get strapped into the chair in April.

I'm nervous my knee will be able to handle it, but sheer willpower and perhaps a lot of KT Tape and my Zensah knee sleeve, I'll be pushing Liam on April 2nd in Carlsbad. I can't predict a fast race on a bum wheel, but I can predict this might be the best race yet.

Do your part and join IRun4 (they are behind in their athlete registrations and it takes only a few moments a week to post your runs on their Facebook Page) and contribute to Team Liam HERE.