I Outran A Security Guard

Things are picking up for me. This week I outran a security guard. I'm no longer limited to out-walking the walkers in my neighborhood.

Overall, this was a fantastic week. On the work front, I headed to Kansas City for meetings. Most of my work trips are booked last minute and this was no different other than the fact that I couldn't figure out why I couldn't get flights in and out of KC which is normally pretty easy. Oh yes...a little thing called the World Series was going on. This meant an extra night in the land of barbeque, but I decided to take advantage of it.

My brother passed away this last July and his wife was still obviously grieving over the loss of her husband. She also wanted to attend the Shawnee chapter of Alcoholics Anonymous (AA) as he was a happy and recovered alcoholic when he died. Linda wanted to bring a pie, but wasn't sure if she had the emotional strength to see his friends. I enjoyed a lovely dinner with her and the following meeting nearby.

There were some gut-wrenching stories including the man who spoke of drinking binges when ended with him literally in his closet while his young kids were in the other room. Heartbreaking and inspirational. Equally rewarding was the conversation over dinner with me as usual trying to insert some laughter to take tension out of the situation. 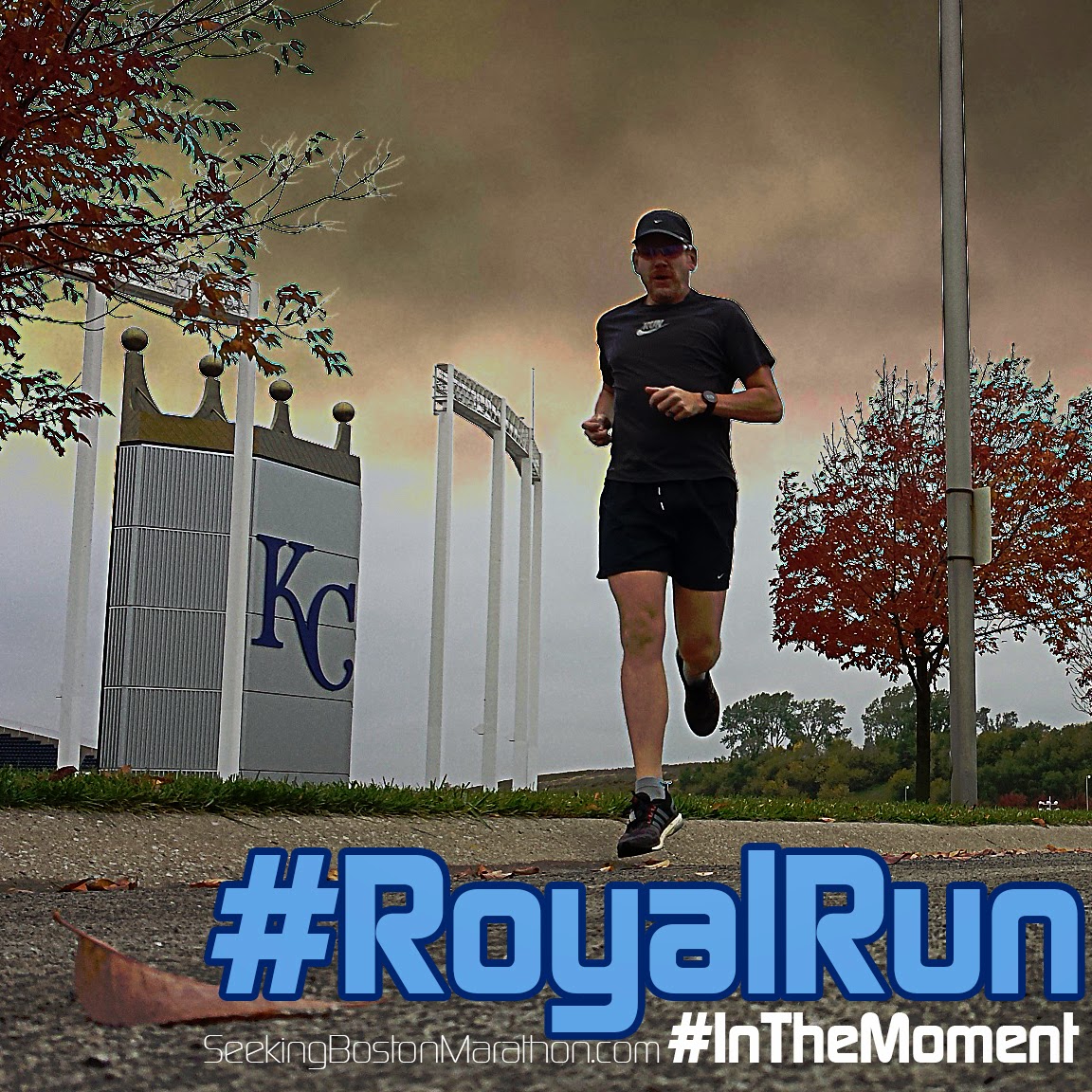 After a fantastic customer meeting, I had an extra day to work out of the hotel room. After a productive morning of calls, I decided to use my lunch hour to take in nearby Kauffman Stadium where the Kansas City Royals won game two the night before. The skies were overcast and the temperatures were cool. I thought this was perfect for trying my second outdoor run since my accident in July. I was in my second week of physical therapy on my separated shoulder which was building up strength, but also increasing the pain in the area. A little sore, but I didn't want to turn down the opportunity to run around the area--as they say, when in Rome...or when in Kansas City.

Aside from my passion for running, I am more than a bit of a sports nut so checking out the Royals' ballpark adjacent to Kansas City's Arrowhead Stadium was a hoot as I'd never seen either park. With both stadiums in adjoining parking lots, it laid out a perfect non-traditional run route for a short run. I wound up running a mere three miles and ran it much faster than my ribs probably wanted me to running my first sub-eight minute miles since July. Perhaps Royals adrenaline, cool Fall weather temps with accompanying grey skies and gold and crimson leaves dotting the isolated roads around the stadiums.

There were plenty of breaks for selfies and snapshots of the area. I posted to Instagram my #InTheMoment pic. Ironically, on the heels of my Matthew McConaughey MKC commercial, Runner's World Magazine PR sent me a blogger promo for #InTheMoment. Post how you live in the moment and you can win a trip to New York City, San Francisco, or Chicago.
#RoyalsRun

After my #InTheMoment selfie, I circled Arrowhead and spotted the Chiefs practice facility in the distance with a couple camera guys in the tower. Figuring they were practicing, I veered off that direction with nothing but a empty beer can and several hundred empty parking spots between us. As I approached, I saw a man get out of his car parked overlooking the practice going on. As I got closer, he looked like a Chiefs employee and he was looking my way. As I got even closer, I realized he was a security guard so I pulled out my headphones. His body language indicated he didn't like where I was headed especially with the Chiefs playing the the Rams on KC on Sunday. The conversation was brief, "you can't be here," he said. "I'm just a tourist," I said. It reminded me of the same time I got shooshed out of the Stanford Campus track field during practice. I ran fifteen feet away, stopped to snap just another selfie, just has he said, "you can't..." and I took off. "Try and catch me" I thought.

A great few days on the road and on the road to recovery.
Email Post
Labels: #InTheMoment Lincoln MKC