Minimal has been the hottest trend in running shoes over the last few years and I've slowly migrated myself to much lighter shoes over the last twelve months.  Up until my last two marathons (Colorado and Boston,) I have largely trained and raced in shoes that accommodate a runner who over-pronates with a high arch and a history of lower leg injuries that include plantar faciitis.  This meant shoes with a fair amount of posting and cushioning.  Much of the hype around the minimalist movement is that injuries actually decrease vs. increase as you move towards a more natural running experience. 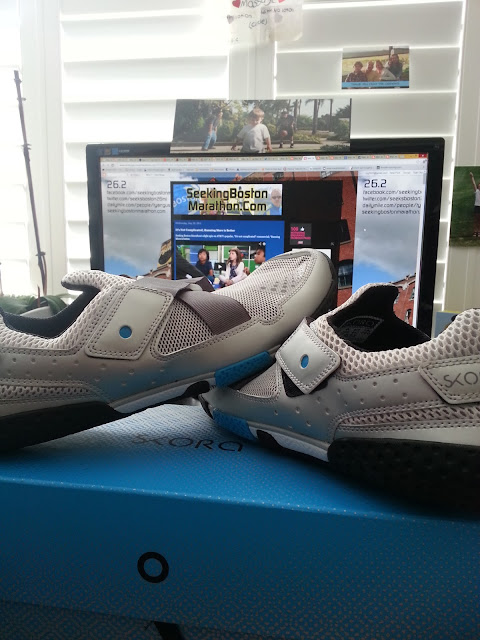 In terms of marathons, I have always gone with a heavier shoe along the lines of an ASICS 2170 in the race itself.  I would also typically log most of my training miles in the same shoe.  For the first time in a marathon, I went with a much lighter Brooks Racer ST5's in Boston two months ago.  While I give most of the credit to my coach, and training plan, it was by far my best marathon yet.

Training for Boston and since then, I tend to rotate my shoes quite a bit, but have stuck with a much lighter shoe.  The latest addition to my run shoe "arsenal" is the Skora Base running shoe.  Skora is based out of Portland, Oregon which knows just a little bit about building shoes.  Upon receiving my Skoras in the mail, I marveled at the shoes once I opened them.  As far as looks go, it is one "badass" shoe.  Even the box they came in is cool with a magnet flap that encloses the carriage they arrived in.

The first thing you notice about the shoes is the unique x-shaped Velcro strap that closes the shoe on the foot.  Shoe designers have been "playing around" with where traditional laces land on the top of the foot implementing slightly off-center lacing.  This strapping system sits on the top of the foot, but equally distributes a taut feeling once you're strapped in.  This eliminates the either too tight or too loose issues you get with a traditional shoe lace.  We have all had races where the laces are too tight which can become a distraction in the midst of competition.

I'm not a professional shoe scientist, but the other thing I noticed was that the padding on the sole of my Skoras was largely in the front of the shoe which would favor a mid-foot or forefoot striker.  Trying them out on concrete this last weekend, it's apparent that your heel is quite close to the impact.  Aside from my migration to a more minimal shoe, I have also shifted my strike to more of a mid/forefoot strike so the Skoras seemed like a natural fit.

With the "X-Factor" strapping system (my term, not theirs) once in the shoe, they feel like slippers.  Not the furry variety...I'm talking more along the lines of the Brookstone memory foam slippers.  Not too tight, not too loose, just right.  Skora touts the sole of the shoe as having "a moderate amount of cushioning with excellent grip and great groundfeel." Their R01 (sole) system "has been designed to match the natural foot shape with curved heel and sidewall profiles and a concave forefoot to allow for natural motion."  In other words; #likeaglove

I've heard (run shoe) horror stories of people who have tried to move too quickly (no pun intended) to a minimal shoe, or any major change in type of shoe (see Newton.)  The good folks at Skora suggested I "ease into them."  It didn't take me long since it was tough staring at these beauties in my office for a couple of days.  I decided to try them out on a "speed day."  The "Silver Bullet" silver gray shoes sure looked the part, so I tried them out on a progressive speed workout.  For speed Tuesday, my run coach had prescribed,

I ended the last segment at a 5:35 minute per mile pace, and quite honestly could have gone either faster, or longer at that pace.  I had just "clocked" my fastest time ever in a speed workout.  As Spike Lee once said for another Portland shoe company, "It's gotta be the shoes."  In this case, my coach and training had a little bit to do with it, but I was "flat out" impressed (pun intended.)

The only mistake I made with this test drive was that with two warm-up miles and two cool down miles, my total workout in the Skora's was over seven miles.  The following day, I did feel a slight muscle "tweak" behind my knee.  As a zero drop construction shoe, I would not recommend going from whatever you're running in to all miles right away in a Skora, or a crazy aggressive run for the first time in these shoes.  I would definitely recommend them for triathletes as they are super easy to slip on and super fast.

I recall an old friend who rides motorcycles and was trying to provide advice to someone buying their first bike.  They wanted something fast.  He recommended against it, and the new rider should have yielded to the advice.  If you've never raced on a fast bike before, don't "open up the throttle" on a Ducati on your first time out.  Take a few lessons, take your time, ease into them, and you will fly safely.
Email Post