Three Things Thursday: Ty in a Dress, The Snow Flies, and Jumbo Shrimp 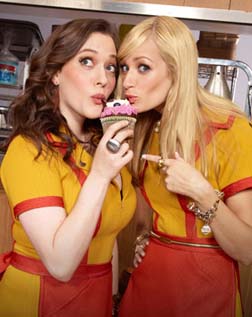 "To a young heart, everything is fun." (Charles Dickens)  This my friends is the only time you will ever see this off-color blog compared to Charles Dickens, but the quote seemed to fit.  October is a great month to bring out the kid in all of us.  I've gotten older, but I have yet to put away childish things.  (Dickens and a biblical reference...what's gotten into me?)  October presents one of my favorite holidays; Halloween.  I can still smell the pillowcase full of candy usually dragged through the snow as a kid.  I can also still remember getting home and taking inventory of the really good stuff and who handed out crap.  As an adult, I am still young at heart and still dress up for Halloween.  I've gone "bag lady," "Caveman," and bad boy rocker, "Aldous Snow."  With a couple Halloween brews, my English accent improves.  This year, I'm one half of "Two Broke Girls," from the T.V. show of the same name.  You'll have to guess which one I am and you'll have to drive more traffic to this blog to think that I'm crazy enough to post pictures of me on the internet in a dress.  Which proves the point, that I will do anything to get someone to read my blog.

I'm in running limbo.  I am done with my triathlon season and wrapped up the summer with a half marathon.  What to do during the winter doldrums?  With typically a 16 week training program for a marathon, that puts me into mid-December before I begin training for the Boston Marathon.  I'm going to say that again...Boston Marathon.  That has a nice ring to it.  Runners talk about an off-season, but to me that's a bit of an oxymoron as I never truly take time off.  I may just trim back on the calendar and certainly turn down the mileage, but I rarely take time off entirely.  Given that, I had a couple of "light weeks" post Denver Rock and Roll (half) Marathon including my trip to India which is not exactly runner friendly (Stray dogs, pollution, and crazy drivers.)  So what's the plan?  Over the last couple of weeks, I've been running 2-3 days a week with a combination of speed and heart rate training.  Slow the heart down on one of them, and go Alien bursting out of the white t-shirt chest on the other.  I clearly have no coach or plan at the moment.  I'm also hitting the pool for some core strength and hitting the weight machines.  The idea being...build some strength and maintain some level of run conditioning before I hit "The Plan."  Not sure what plan I will use yet, but I have some ideas after using a variety of them including Higdon and FIRST.  Stay tuned to SBM and we'll both find out.

My favorite running gear is as little as possible--like Bart Yasso, I still have a nude 5K on my bucket list.

Mentally, I feel stronger and lighter in a singlet and short shorts.  My boys make fun of the later.  October not only means Halloween, but it also means the white stuff shows up in Colorado and other parts of the northern hemisphere.  Not the time for minimalist clothing.  I have an area in the back of my closet that stores all my running gear in a laundry basket.  Under that basket is another basket full of my winter running gear.  Time to rotate the baskets, consult the "cold nipple calculator" and get out for some winter wonderland running.  I've had some great runs over the years in snowy weather and some not so much.  My worst was my New Year's Eve run in 2011 in single digit temps going 14 ALONE.  Completely sucked.  One of my best was Roxborough Park with a light snow and not too deep of snow to run in.  #awesome  With Boston in April, that means plenty of running in the elements over the next five months.  Bundle up and bring it on Mr. Freeze.