I Can See the Gym From my House

SeekingBostonMarathon caught up with former vice-presidential candidate Sarah Palin for a sneak preview of her new book on fitness.  Not to be outdone by Paul Ryan (who claimed to have run a two something marathon himself,) Sarah reportedly will have a chapter on marathon training.  I caught up with Sarah while in Chicago and met for our interview at the Girl & the Goat restaurant on Randolph Street.  She was 20 minutes late, and arrived with shopping bags in her black velour Juicy Couture sweatsuit.  I ordered a glass of Pinot Noir.  She ordered a Jack Daniels and Diet Coke. 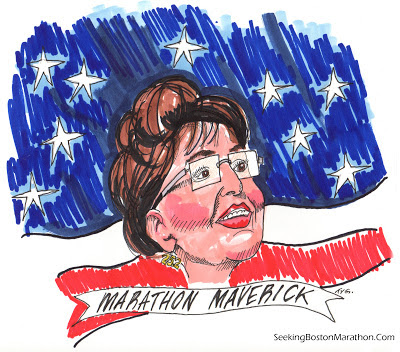 SBM:  Nice to meet you Sarah.
SP:  You betcha!  Thanks for waiting for me.  That traffic was crazier than elk during mating season.
SBM:  No problem.  I imagine times are busy for you with the election going on, Bristol back on "Dancing with the Stars" and writing a book on fitness.  I'd like to hear more about it.  I understand there's a chapter on marathon training?
SP:  You're darn tootin!
SBM:  That's ironic.  Paul Ryan is a marathon runner.  What do you think of Paul Ryan as a candidate and as a runner?
SP:  He's quite the fella, I tell ya.  That smile and those big muscles of his...ya know he's a hunter too.  He can run 25.2 miles in a marathon and go out that weekend and catch himself some dinner.  He's got my vote!
SBM:  25.2?...uh...let's move on.  What training routines do you recommend, Yasso's, Fartlek intervals?
SP:  Well yahoo to you too there skinny fella! Ya know after a couple of kiddo's it's kinda tough not to let out a little air once in a while when you're out there exerting yourself and all.  What was the question?
SBM:  Ooookay.  Who do you look up to...who's your role model; Shalene Flanagan, Kara Goucher?
SP:  I loooove Kara.  She's such a spunky little thing.  I was so glad she finally got the Oscar for "The Blind Side" after Jesse two-timed her with that two bit tattoo'ed hussy.  Now there's some "what goes around come back around" for ya! 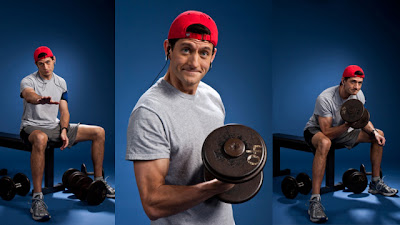 SBM:  Okay, how about post race, do you have any tools you rely on; "The Stick," or a foam roller?
SP:  With this hair honey, I stick with my trusty blow dryer.  My mother used rollers.
SBM:  During a run, do you prefer goo or do you prefer "Shot Bloks?"
SP:  Sure, I'll take a shot, make mine a "Jack."
SBM:  Alright..waiter...could you give Ms. Palin another?  Sarah, what's your next race?
SP:  I'll race ya with the next round of Jacks if you set aside that frilly glass of grape juice.  You might gain a little weight and get some hair on your chest if ya drank a man's drink.
SBM:  Alright.  Waiter.  Make that two and make mine a double.  Sarah, I meant what's your next running
race?
SP:  Paul's running the race.  Ole Mitt couldn't quite keep up with this marathon "maverick!"
SBM:  (As the next round of drinks arrive.) Wonderful.  Okay "Cannonball!,"  last one done with this round buys dinner.
Email Post
Labels: bart yasso paul ryan marathon sarah palin fitness book yassos