Frightening Friday: "It's Gotta be the Shoes"

Ahhh....the smell of Fall leaves on the ground and wet candy in the bottom of a pillowcase.  Something about Halloween that still brings out the kid in me.  Last year I was a "rocker" and somewhere along the evening, I developed a British accent so for the rest of the evening I was Aldous Snow from "Get Him to the Greek."  Apparently, I was rather convincing as a boorish rocker. 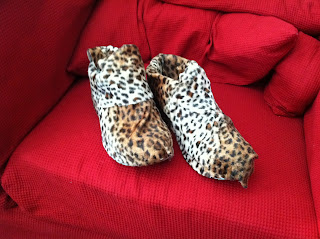 How do I top that?  This year...my wife and I are going as caveman and cave woman.  Considering we got our first dusting of snow in Denver, I was not about to go out on Saturday night in bare feet although that would qualify me for authentic cave man and minimal runner.

I put my creative hat on and built some leopard shoes to complete the outfit.  As an aside, if an older woman that preys on younger men is a "cougar" what's the male equivalent...Jaguar?

In the 80's, Spike Lee did an infamous Nike shoe commercial with Michael Jordan, "It's got to be the shoes.

"  In this case the shoes don't make the woman, they make the caveman.  An old pair of Pearl Izumi's (I should have used Puma's) converted to fast caveman shoes.  Not as fast as my new Brooks Pure Project Cadence shoes, but pretty cool.  You only see the shoes in the blog...20 comments here or on my SeekingBostonMarathon Facebook page and you'll see me in full caveman mode.  I'll do anything for viewers.
Email Post