Here we are less than two days away from the Super Bowl, Gave 7 of the World Series or Lord Stanley's Cup except I'm not watching this one on T.V., I'm running this frickin' thing--the Boston Marathon!

A slight change in my approach this year, I flew to the East coast Wednesday morning for a business meeting on Thursday and was able to fly from Philadelphia to Boston late Friday morning. The advantage this gave me was three extra days adjusting to the Eastern time zone and getting int 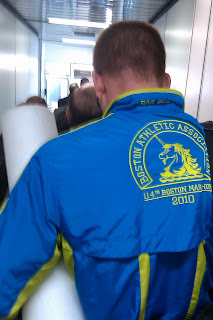 o Boston one day earlier than last year. Somewhere along the way I read (likely from Hal Higdon) that it's best if you can arrive one day early for every time zone you travel. Given the turbulent training session I've had, I'm thrilled to get in early and be as adjusted and rested as possible.

Unfortunately, I may have "peaked early" since the highlight of my Boston Marathon trip happened in Philadelphia. After a five mile run along the ass end of the Philadelphia airport and water treatment plant (I didn't care because all I could focus on was that I was a mere four hours from running mecca) I was hanging in the pre-board area and was approached by a man from Runner's World who spotted my 2010 Boston Marathon jacket and my travel companion--my foam roller. He had this, "that's too f'ing funny" look on his face and snapped a cell phone picture. I gave him one of my blog stickers and left it at that.

A few hours later after landing at Logan International airport, I started to check into my virtual world and realized my foam roller and I made it to Runner's World Fa 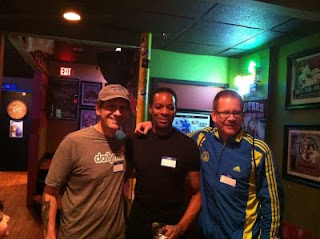 Best quote came from my Runner's Edge of the Rockies buddy Steve, "So Runner's World's Facebook page today has one picture of Ryan Hall, one picture of Kara Goucher, and one picture of Ty Godwin. Good to see they captured all of the pre-race favorites." While excited about the cool pic, I was embarrassed to find out it was none other than Mark Remy who I met and snapped my pic. Wouldn't be bad except I'd admitted I was the one they'd tagged but said I think his name was Mike?

I arrived at our condo in Beacon Hill and it exceeded our expectations (my wife done good.) Spending a good part of my life in a hotel room on business, I prefer to scope out something that feels like home and helps me relax. This place rocks in that department as seen in the video below.

Friday night we ventured out for pasta in the North End. You know you're probably in the right Italian restaurant when there's a picture of Robert Deniro hanging in the vestibule. "Are you talkin' to me?" The food at Limoncello and v 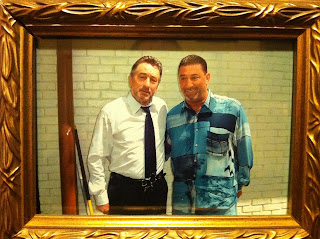 ery Italian and Boston wait staff did not disappoint. I'd recommend the lasagna over the spice penne. Good times with my wife, sister and my brother-in-law.

I had visions of catching Kara Goucher at Niketown on Saturday morning, but a snafu with the alarm combined with my body demanding another hour or so of sleep meant a slow start to the day that began with the duck tour of Boston. our driver, Disco Dan was quite entertaining as we took in the sights and history of Boston along with his wit. I even got to drive Daffy Duck in the Charlestown river--talk about soakin' it it. Aside from the amphibious duck we've largely used Boston's "T" subway system to get around. Nothing like the smell of a subway to make you feel like you've been baptized by the city.
.
Prior to heading over to the expo, I hit the DailyMile meetup at McGreevey's right across the street. A couple of these folks I'd met at last year's Boston meet-up, some I'd never met, and a couple of us commensurated over the "water boarding" we got at Portland in October (a soaker start to finish.) It felt like a reunion as I've got to know many of these friends well albeit over a web site. Another highlight and I once again came away with a door prize; Remy's "The Runner's Rule Book."

Boston's expo is a pleasureable overdose of running clothes, tonics, potions, gadgets and grub. After coddling my bib and grabbing my race shirt, I headed to the official Adidas souvenir swag area. Talk about a mad house...it was like one of those shows where there's a dozen brides dresses at 80% off and 36 brides grabbing at the them. Either that or a stock trading floor..."you got that in a large?" as they keep carryin 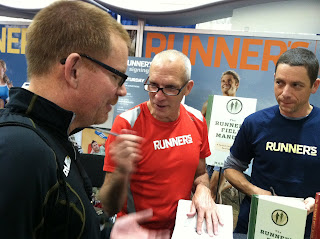 g the goods in. One jacket, one singlet, t-shirt, a patch and my debit card starting to melt, I took off for the rest of the expo. With Remy and Bart Yasso's books in hand I was able to meet Bart, and Mark for the second time and get them to sign my books.

I've finished the night with a little Mexican food in our condo (I find it good to load up on salt two nights before a race,) and winding down in the home on Beacon Hill. At last year's expo, I watched the video on the marathon in the John Hopkins' booth and heard a veteran say that you can assume your sleep the night before a race won't be that good. Get a good night's sleep two nights before the race. I'm following Dr.'s orders. Good night!
Email Post