Graceland. Resting place of Elvis and destination for over a 1/2 million visitors a year who make their pilgrimage to get some divine rock and rock inspiration from "The King." In the running world, there's only one indisputable Graceland, and that's the Boston Marathon. Runners from all over the world will make 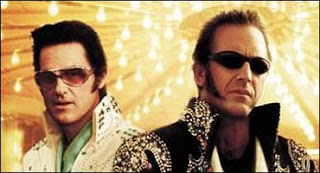 their running pilgrimage to Boston to their running mecca. Meb will be there...Ryan and Kara will be there as will several past winners. New York is trying to build similar prestige with their fall classic with even tougher standards for entry...ironic, that the BAA raised the qualifying times recently to maintain the elite status of the race. There is only one Boston Marathon.

I'm two weeks away from Graceland, and as they say, my training is in the books. I am in taper mode and nothing I can do from a running standpoint will improve my race day performance other than rest and build my mental confidence for race day. No more long runs, no more challenging Yasso's. Watching the "My Run" documentary last week about 57 year old Terry Hitchcock run 75 marathons in 75 days he extolled what I already knew which is the marathon is more about the mental game than the physical one. Hitchcock was the most improbable character to take on that task; heart problems, overweight, inexperienced (or more aptly, no experience,) and bad legs--kind of the later stage Elvis. He finished with stress fractures in both ankles and in his patella.
Terry knew that the physical part was going to be a challenge, but found the mental part even tougher--to allow your mind to convince your body to continue on.

The next two weeks will be all about rest, diet, and the mental preparation game. This has been my most challenging marathon training session to-date with over training fatigue, excessive travel stress, a prescribed layoff, and pain in my left leg that moved from my heel to my shin and now in my IT band and left hip bone. Given that, there's confidence in a few facts and numbers.

7: The number of marathons I've run.
4: The number of those that have been Boston Qualifiers.
3120: Training Miles in the last two years getting to Boston.
19: The number of 20+ mile training runs over that same time period.
3:06: My average Yasso 800 pace. Some consider a marathon finish predictor. I'd consider that a bit insane.
4: Depending on last minute travel, the number of days I'll be acclimating in the E. U.S. timezone preparing for the Patriot's Day race. Some suggest a day for every time zone you have to travel to a race.
3: Number of taper weeks. I've tried two, but at my age, three seems to suit me better.