Turn Your Head and Cough

I remember as a kid when playing little league football, you were required to have a physical & hand deliver the clearance note to your coach so you could play. I just had a flashback of the intimidating white lab coat handling the ice cold medical instruments (were they stored in the fridge I wondered?) and the awkward "turn your head and cough" treatment--what was the point of that?

Anyhow, this week was the equivalent of the little league physical to clear myself & commence the 600 training miles in preparation fo 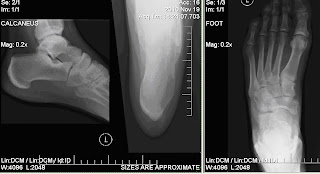 r the upcoming Boston Marathon in April. Yes, it's that time again. This check-up was voluntary. As I've blogged about, the race I had in Portland in October was a tough one for me which resulted in heel pain I've been dealing with since then. I've had a long layoff to heal the heel and to rest from over-training. Erring on the side of caution, I even went in for x-rays to make sure I didn't have anything serious that would have wasted my BQ not to mention the condo and airfare I've already booked.

In the back of my mind, I knew that while the x-ray showed no obvious breaks, it wouldn't necessarily show the nasty four letter word; stress fracture (okay that's fourteen letters.) To provide peace of mind, I scheduled two appointments; with Mark Plaatjes (one of my running guru's, and physical therapist) and a local podiatrist.

Heading into Plaatjes office in Boulder, I was concerned that I'd get the lecture, "why didn't you come see me sooner," or "we'll have to get an MRI on that." While I'm walking without pain, and & I started pre-training miles this week without issue, pushing on the back of my heel still produces a dull pain. The good Dr. started asking about my last race injury and I confessed that I'd made a rookie mistake 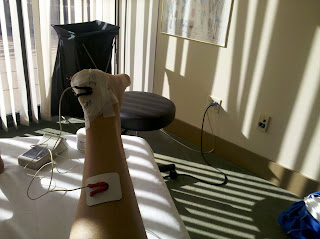 by using a different lighter race day shoe (Asics Speedstar) with not enough miles on them (rule 101 in a marathon says "don't try anything new on race day.") After Portland, my achilles tendons were as tight as thick piano strings & I pointed blame at the shoes. I'm going to burn them in a podcast. Plaatjes put my deepest fears to rest that the affected area is not a common stress fracture area & pinpointed it to a bursa; rectrocalcaneal bursitis.

I have run races and trained through a malady of injuries, but this one sounded like something I could muscle through; pun intended. The usual list of treatments were recommended; strength conditioning, stretching, more stretching, ice, heat, massage, and time with my foam roller. Plaatjes had previously diagnosed part of my problem was a left leg slightly shorter than my right which lead to a lift in my running shoe. I also have a second t 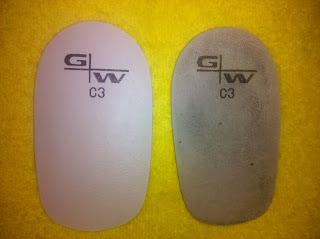 oe slightly longer than my big toe (again on the left foot.) As far as the shorter leg, you can imagine the unorthodox torque that puts on the body over 600 training miles and an all out race of 26.2 miles. It's no wonder that most of my injuries have been on the left side. Upon inspected the lift in my shoe, the 1600 miles I've put on the cork-based lift had flattened it. I left Boulder with a new lift glad and happy that I didn't hear the four letter word.

I debated whether or not to cancel the podiatrist appointment but figured it wouldn't hurt to get another look at it. Ironically, the podiatrist was a marathon runner himself which gave me confidence that he knew runner body issues. I "replayed the tape" of Portland and the visit to Boulder & brought the x-rays taken from the month before. For the most part, he confirmed what I'd learned earlier in the week, but tendonitis was also mentioned as a possible culprit. An inspection of the x-ray showed some "build-up" around the area, but the specialist dismissed it as common for the amount of strain a marathon runner puts on the body. Essentially, the same treatment was prescribed along with a topical anti-inflammatory ointment. After an inspection of my orthotics, I was once again cleared for take-off and out the door.

For this weekend's short long run I will have my medical permission slip figuratively in my head as I head into the ramp of Boston training miles. Lucky break.