This is Part III of my blog countdown to the Portland Marathon on October 10, 2010.

It's finally here. Christmas, the Federal Tax Return check came in the mail, graduation day, wedding day (or bachelor party weekend,) the Broncos win the Super Bowl again, and a big commission check all wrapped into one--it's marathon week. Six days away from my next race--the Portland Marathon. Since my last countdown update, I have been following my own advise and focused on taper and taking care of myself. As witnessed by my goldenrod colored pee (I know..TMI,) I have been infusing my body with a platoon of vitamins intent on avoiding the marathon weak (sic...or is it sick?) flu that's plagued me in my last few races.

Last Saturday's long run was an eight miler with my running group, Runner's Edge of the Rockies. I love going out with the running group the Saturday before a race because you have been through all kinds of ups and downs over eighteen training weeks with people you've got to know who share the same passion. Obviously, the eight miler was at a very slow pace maintaining Zone 1/2 heart rate throughout. There were many running friends who wished me well, provided encouragement and even predictions. My buddy Dean was so bold as to predict breaking 3:10...I think he had some adult evening beverage in his morning water bottle. The obvious question from everyone was not only, "how do you feel," but "what's your goal." I didn't exactly share it with them and wont share it here as I've become somewhat superstitious about that. I normally wait until the night before to set my final goal. What I told them was that I will have two goals in mind; one I know I can hit, and a "stretch goal" that will take the best possible performance and feeling my best on race day. Perhaps I'll start a new tradition and once the number appears race eve, I'll tweet y'all. 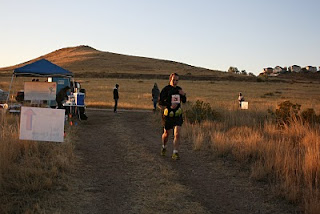 I thanked Dean (and Ellen) for the advise and did admit that I feel that this is the smartest training session I've had to date (incorporating Heart Rate based training,) and will be anxious to see how that translates on race day.

I rounded out the weekend with an Air Force football game with my sons on Saturday, and volunteering on Sunday for the Bear Chase 50 Mile/50K/Half Marathon organized by my running group mentor, David Manthey. I figured what better way to spend a Sunday than getting a little jolt of running adrenaline without putting in the miles a week away from the race. Seeing runners hammer out 50 miles was inspiring and humbling at the same time. I felt like a casual 5K runner (not that there's anything wrong with that) that wonders how could anyone run that far. I would highly recommend volunteering for a race and experiencing an ultra.

The race was held at Bear Creek Lake Park in Lakewood, CO. I was manning (with four others) the morning shift at Turtle Pond at the 4.5 mi mark. I arrived at 5AM and promptly got lost trying to find Turtle Pond. Once there, I felt like a Dad on Christmas day looking at an "assembly required" nightmare toy as there was tables, tents, food, five gallon water bottles, water stations, and first aid bins. I was thoroughly confused when I opened the first aid tub to find all kinds of materials I knew nothing about--I was thinking to myself, "I have absolutely no idea what this stuff is for" and hope I don't have to use it (legit first aid medics showed later before the race start.) I learned a lot through this volunteer event including, I have no desire to run an ultra (yet) and it's impossible to put up a shade tent in the dark by yourself.

Today was a Zone 1 recover run that kept my heart rate below 135 over four miles at a pace of 7:54. An interesting comparison is my VO2Max study from five months ago. At the same heart rate (135,) I was running at a pace of 8:12--an 18 second per mile improvement. As a point of reference, at my age, an eight minute mile is my BQ pace.

What does all that mean? I'm no Doctor, but the results seem to show that I'm able to run at various speeds at a lower heart rate than I did five months ago. Rising heart rates approach lactate production (no...not cat milk) which equals "the wheels come off" and the "shit hits the fan" in a marathon. This improvement combined with feeling healthy and rested gives me confidence at the start of the week heading towards my trip to Portland.

Going on trips as a kid, my Mom would help build the anticipation by setting out the suitcase the week before and would start to lay out everything required for the trip. The "apple doesn't fall far from the tree" as I've started laying out some of the essentials for my race in Portland including a new singlet which is another odd superstition/tradition I have. Do you think I'm ready if I charged my "back-up" Garmin six days before the race and I've got two pai 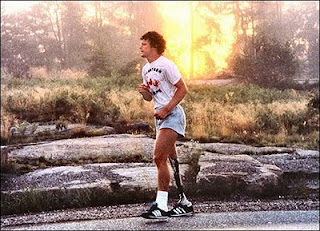 rs of race day socks laid out not sure which ones I'll go with?

As I wound down my day, I flipped on ESPN and ironically, they had the Terry Fox story on ESPN's 30 for 30. "Into the Wind" chronicled Terry's 1980 fight with cancer and his mission to run across Canada to raise money and awareness for his disease. Dude ran the thing on one leg as an amputee. An inspirational story and a timely inspiration for race week.