Talk about extremes. A month and a half ago I ran on hallowed ground in . Massive crowds and hysteria lined the 114th running of the Boston Marathon. Jonesin' to get another marathon in this summer, I ran the 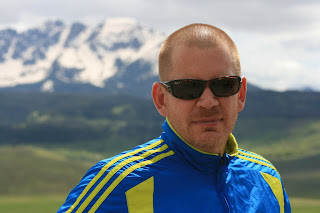 Steamboat Marathon in gorgeous . They couldn’t have been more different yet both are highly recommended.
Sea level vs. altitude. Attitude vs. low key. Crazed college girls screaming at you like a rock star vs. the crowd literally showing up the last four blocks of a marathon. More cows vs. cowbells.

It took some creativity to come up with a training plan with roughly seven weeks between marathons and having run three within six months (Steamboat, , and CIM/Sacramento.) Feeling over-trained for and only one month into my heart rate training program, I consulted my running coach and came up with a shortened plan that took into account that I’ve logged over 1400 miles since last July.

The curve thrown at me three days before leaving for Steamboat was a bout of the flu bug that kept me in bed all day on Tuesday. Already feeling a bit run down from all the training, a flu bug felt like a death knell to any notion of even running on Sunday. I put myself on a “brat diet” composed of oatmeal, bananas and fluids. Most rational minds would have kept the trip but skipped the race. Running three marathons in six months eliminates me as someone with rational thinking when it comes to my running.

Steamboat Springs at race time was still considered to be in their “mud season.” Mud season is just like it sounds...halfway between snow and ski season and their true summer with reports of snow a week prior to the race. Given the offseason, they had some phenomenal promos on lodging so I scored a five bedroom townhome for what it would have cost me for two low-end Marriott rooms in town. With plenty 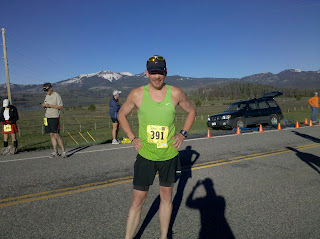 of room, we invited friends and brought the whole family.

Having logged many drives up ’s I-70, I take the mountain scenery for granted. Steamboat Springs however is Northwest of the typical I-70 corridor ski towns which takes you up highway 40. The car ride scenery itself was mind blowing as it felt like “we’re not in anymore.” As we drive into the “boat” I was awestruck with the beauty and quaintness of the town.

Saturday was expo day just like all other marathons, but this one was a small fraction in size of other’s I’ve attended—there was no giant Nike, Gatorade, or Asics booth at the expo. In fact, you could have fit the whole expo into the Nike booth at any large city expo. Ski mountains covered in green and yellow and a very full river framed the expo. Small town charm and friendliness greeted me at bib pick-up—they didn’t even check my ID. My daughter Nikki had been chronicling the trip and expo (see my pre-marathon video interviews here.)

The final interview focused on “are you nervous?” proved to be an indication of wh 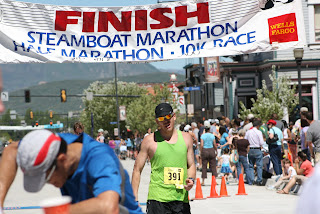 at was to come on race-day as I said I was uncertain as to how I’d handle a full marathon just coming off a flu bug.

Saturday night’s pasta dinner at the townhouse was followed by a typical restless night of sleep (what is up with that?!…gotta work on that one.)

Despite double-checking where the bus pick-up was for Sunday morning, I walked up to the designated bus pick-up area and questioned, was I in the right place? I was a little early, but there was only one other runner waiting. Eventually, other runners and two large buses showed up to escort us 26.2 miles out of town to Hahn’s Peak as the starting spot.

At Hahn’s Peak I ran into some fellow Runner’s Edge of the (running group) members. Based on Saturday’s weather and not freezing my butt off at the start of the race indicated that I was in for a hot race. No national anthem, no corrals (other than the rodeo one back in town) and plenty of cows characterized the start of the course. Knowing the Wellesley ladies and drunk BC college students wouldn’t be there to cheer me on, I considered an iPod, but decided to be “one with nature” and soak in what Runner’s World called one of the 10 most scenic marathons of the year (’96.)

What should have been a fun run (and it was,) I decided to once again try a 3:15 pace. Four days earlier I was in the bed with the flu. There was an imaginary 3” running coach hologram on my left shoulder of my running coach Dave telling me to slow it down. No regrets, I held a consistent 7:30 pace well past the halfway point and my energy felt halfway decent. Being a smaller race, they had fewer water stations and could certainly have used more of them and placed them around the two hills at mile 20 and 22. Like , this one was a bit of a screamer out of the gate starting over 8100 in elevation and ends at 6,695 downtown. Hills training paid off as this one was more of a “roller” than the elevation chart would indicate.

Once again, I have respect for 26.2 miles and hit the wall with this one slowing down around mile 18 and approaching 22 or 23, I actually took a walk break. I took knee bend breaks at a couple water stations near the end of , but I’ve never walked in a race. I took the last shot of my Strawberry Banana Gel pack and decided to run the balance of the race. As I entered town, it was definitely heating up, but the small crowds lining the streets got me through the last part of the race combined with being able to pass some of the ½ marathoners who had a 13.1 mile head start.

My family greeted me at the finish line along with six or seven cups of ice cold water and an ice cold towel.

Given everything I’d overcome, I was not disappointed with a 3:36 finish. As the family was headed off to buy me a giant breakfast, the results were being taped to the historic courthouse stone exterior wall. Knowing I was well off my goal and best times, I still checked. Much to my delight, I realized I was picking up some hardware for the first time in a marathon. I’d finished 3rd place in my division.

A footnote to this blog. I dedicate my third place finish to my Dad. My Dad and Stepmother, Ruth were enroute to Steamboat and ran into car troubles so they have to settle for the virtual version on my blog. His (good) stubborn qualities lead me to "lace them" up four days after the flu. His persistence qualities helped me pick it up and finish this one running--not walking into Steamboat. An early "happy Father's Day" Dad.