A need for Speed

After marathon number two, I decided to get serious and learn more about what I need to do to improve my time beyond logging 500-600 miles per marathon in training. The need to lower my time probably has something to do with my combination of OCD, Type A, and un-natural competitive skills (stupid competitive stuff like the time we did time trials on the water slide at President’s Club in Hawaii—we spent all afternoon figuring out who could get to the bottom the quickest—my nickname after that day—the “Pink Torpedo” due to the red hair, fair skin, and freakish water slide speed.)

Logical components to add to the routine include; speed work, hills, tempo runs and Fartleks--okay…true confessions, I still don’t know what a Fartlek is—too many things that pop in my head, but none seem to have anything to do with r 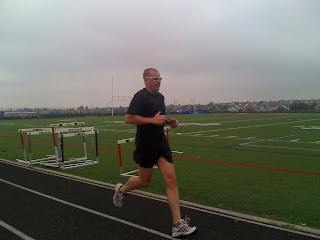 unning. Anyway, I digress. My last marathon (Chicago ’08) and training for CIM in December have introduced speed training to my regimen. Having never run at any level, showing up a high school running track was a foreign concept to me. I must admit, I had to ask on the first day, “what’s a 400?” I eventually figured it out—essentially, 400 meters is one lap on a standard track and a ¼ mile (1 mile = 1 609.344 meters.)

Part of the “stable” of experts I try and glean guidance from includes my speed coach, Maureen Roben. Maureen is one of the few American women who has qualified for four Olympic Trials for the marathon, and was the #1 American woman (marathoner in 1987.) Maureen runs a group of runners that meet twice a week for speed interval training. I catch the “o’dark thirty” session on Wednesdays at Cherry Creek Middle School. Maureen has a wide range of runners (skill, age) and does a great job of mixing it up with a variety of different intervals each week. She’s helped me improve my time and has helped tweak different form issues—leaning forward and not running with my arms in front vs. flinging behind my back.

Maureen does a good job of “mixing it up” with 200’s, 400’s and 800’s with recovery laps in between. As mentioned above, there’s a wide range of runners so there’s always an elite runner or 20 something in front of me pushing me to go faster. Overall, I’d give it a “thumbs up” to integrating speed/track work into your regimen.